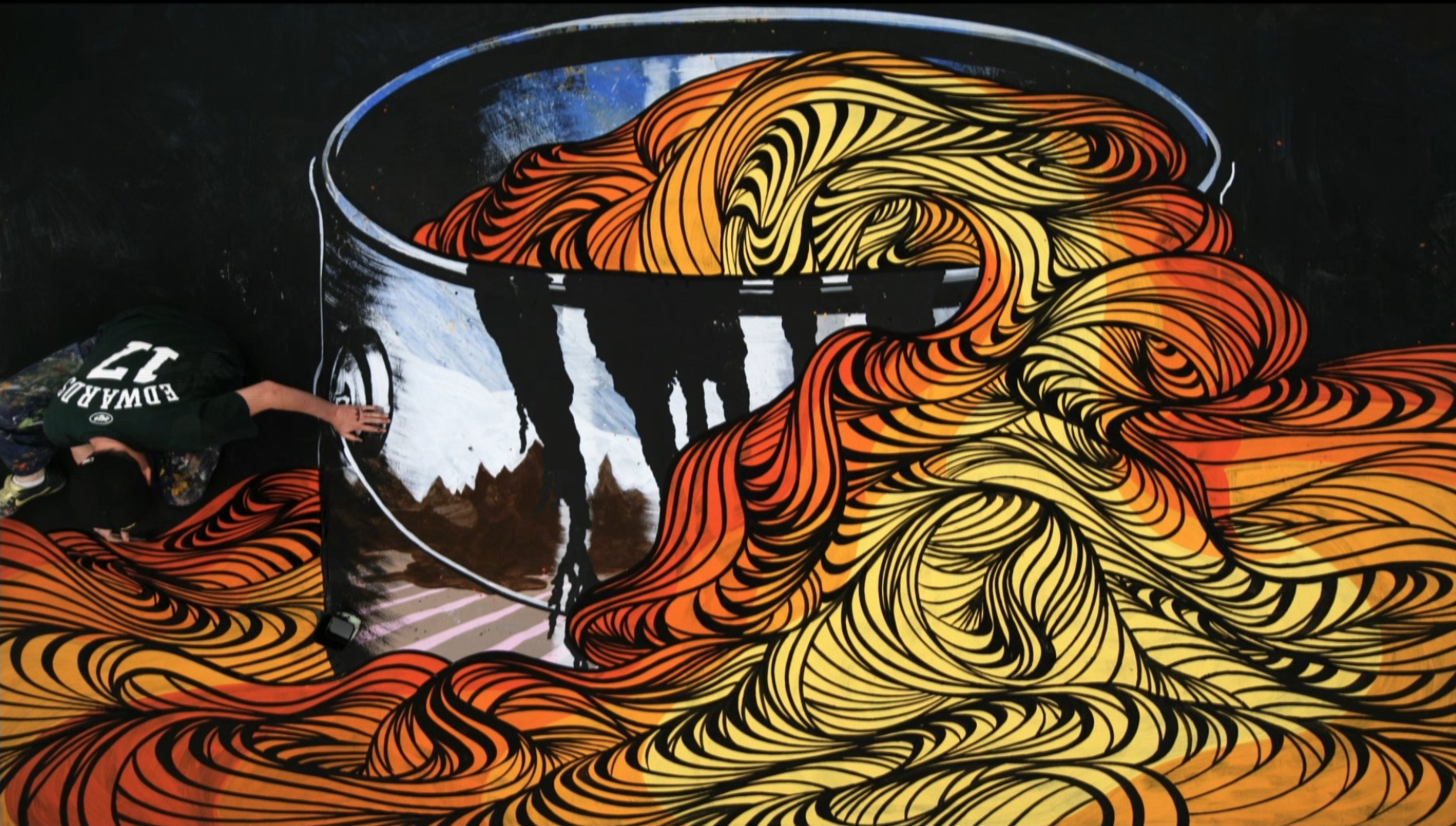 In his explorations of movement, change, and rhythm, multimedia artist David Ellis effectively combines his talent for visual representation with his passion for musical expression. The confluence of the visual and the aural typifies the wide range of his artwork, from stop-motion videos to kinetic sculptures to live painting performances. By utilizing various elements of music making—collaboration, improvisation, timing, repetition— Ellis enlivens his creative process and thus his viewer’s experience.

Born in North Carolina in January 1971, Ellis grew up immersed in the various musical styles practiced by several family members. His brother, John, a tenor saxophonist, plays in jazz venues across the globe. Two of his uncles are musicians—one is a classically trained flautist, and another is a piano technician and player. His maternal grandmother was a pump organist who led her church’s choir. Although Ellis lacked the patience to learn how to read and play music as a child, he eventually found ways of expressing rhythms and sounds, but through visual forms.

Growing up in Cameron, a small town in a tobacco-growing region with a population of less than three hundred, Ellis worked in the fields to earn money. At the same time, he also went to the fields to paint his family’s barns and outbuildings, influenced by the graffiti artists he watched in the 1983 PBS documentary Style Wars. With his discovery of rap music via “Super Mix,” a Saturday-night radio program broadcast from the nearby Fort Bragg military base, a love of hip-hop culture soon became central to his development as an artist. He painted murals in nightclubs and even released his own twelve-inch record before enrolling in the visual arts high school program of the North Carolina School of the Arts. His studies continued in New York at the School of the Visual Arts and The Cooper Union, where he received his BFA in 1994.

The artwork and guidance of artists Robert Breer and Hans Haacke were influential in Ellis’s formal education at The Cooper Union. Breer’s motorized sculptures and stop-motion films incorporate humor, chance, repetition, and motion—essential aspects of Ellis’s creations, which also reflect concerns similar to Haacke’s, such as process, freedom, and change. Ellis also found inspiration in the innovative installations of video and found objects by Tony Oursler and Laurie Anderson’s performance art and experimental music. The hip-hop scene remained a major influence, particularly the graffiti art and musical performances of Rammellzee. Ellis also gained valuable experience in realizing large-scale installations by working on the set design and construction of music videos until the late 1990s. By then, hip-hop music had become more commercialized, and Ellis began to distance himself from the scene and returned to North Carolina in 1999.

Music, however, continued to play a part in Ellis’s artistic practice, evidenced by the fluctuating, collaborative, and improvisational style of production that Ellis favors, a style solidified during his return to Cameron. There he led the formation of The Barnstormers, an international group of artists and designers that has since grown to more than forty members. They traveled to the abandoned barns that Ellis once painted as a teenager and, with the encouragement and material resources of the local community, restored and repainted the structures; in the process Ellis’s visual expression was reinvigorated. The Barnstormers’ Fluxus-like collaborative efforts represented Ellis’s belief that artists should work like musicians, that is, combine their talents to realize a piece and enjoy the creative process. Opposed to the clichéd archetype of the solitary, tortured artist, Ellis continues to work in collaborative ways that sustain the love of making art he has had since the age of twelve.

The Barnstormers returned to Cameron every summer until the late 2000s. During that time, Ellis began a series of kinetic sculptures derived from his childhood fascination with player pianos. In 2005 he completed his first in a series of “drum paintings” after his realization that the basic construction of a painting—a sheet of canvas tautly stretched across a frame—allows it to resonate like a percussive instrument when tapped. Adding automated drum actuators to the structure, Ellis was able to make an artwork that played itself and in turn made rhythmic sound visible. Soon after, he began a series entitled Trash Talk, in which he transformed discarded objects from the studio and the street into mechanisms that bang out beats composed by his longtime collaborator Roberto Lange. In many respects, they recall the sculptural machines of Jean Tinguely. However, rather than the sarcasm conveyed through the obsolescence of Tinguely’s self-destructive works, Ellis’s sculptures suggest innovation and regeneration. Moreover, they impart a sense of wonder and levity to the viewer’s (re-)discovery of overlooked, ordinary objects.

Concurrent with the development of his kinetic works, was the production of recorded painting sessions Ellis would later call “motion paintings.” As he and other artists painted a series of improvised, overlapping images on the studio floor, Ellis positioned a time-lapse camera overhead to photograph the process every few seconds. He then compiled the digital images into a stop-motion video, in which the individual frames create the illusion of rapidly evolving imagery when played in sequence. To complete the projects, Ellis and Lange added a layer of abstracted sounds to the visuals, including noises made during the production. These motion paintings are meant to hang on the wall, as would any other paintings, yet the process of their creation becomes a part of the works, as they depict the figure of the artist moving across a plane of changing imagery, building up an image only to sweep or splash a layer of paint across it. These moments of layering are modulations of the artwork that function like the bridge passage of a song. On the one hand, they interrupt and alter the composition, and on the other, they link images together to make the work whole. Similar to a hip-hop track, Ellis’s motion painting is an assortment of samples, breaks, and disparate moments combined to create a rhythmic flow of artistic expression. — Kanitra Fletcher

Ellis’s newest motion painting, Animal, is the visual record of his residency at The University of Texas at Austin. In collaboration with cinematographer Chris Keohane, Ellis aimed to distinguish this work from previous ones by adopting a more intimate method of production and creating a less structured visual format. Inspired by personal conversations and the natural environment, Animal showcases the delights and details of the creative forces of nature that often go unnoticed. The nine-and-a half-minute animation features a kaleidoscope of spectacular creatures, landscapes, and abstractions—in varying colors and shapes—interspersed with dramatic splashes of paint. As Ellis throws colors across the canvas, he allows for moments of play and chance. The placement of the paint is undetermined and free to settle wherever it might land, suggesting the unpredictability of not only the natural world, but also the artistic process. To compliment the mercurial nature of Ellis’s practice, Roberto Lange’s soundtrack combines a range of unexpected elements. At any moment, one hears vocal excerpts, percussive breaks, ambient noises, ritualistic chanting, or distorted beats. Although Animal differs from Ellis’s previous motion paintings, its shifting moments of freedom, discovery, and surprise extend from Ellis’s continuous search of ways to represent the universality of art through the rhythms and movement of life. — Kanitra Fletcher