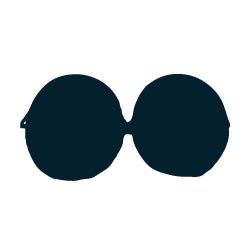 A native of Chicago, Donald Lipski attended the University of Wisconsin in Madison. He then earned a Master of Fine Arts (MFA) degree in ceramics from the Cranbrook Academy of Art in Michigan. He now lives in New York. Lipski is best known for his elaborate arrangements of ordinary found objects on white walls of galleries. The objects he uses for these pieces usually appear to have little or nothing in common, but often the juxtaposition of objects can imply meanings. For instance, in Med-i-vac, Lipski covered a medical rescue device with razor blades. The juxtaposition of an object intended to heal with objects intended to harm, creates contrast and irony.

Lipski often uses repetition of identical items in his work. Here, he used silicone adhesive to attach pennies to the surface of two steel buoys found in a Seattle junkyard. Many art historians consider Lipski to be a conceptual artist. In other words, he is trying to express ideas in his work. However, Lipski’s art is also visually stunning. As he says of his own public work: “I try to make something seductive, that immediately pulls you in and makes you take notice; and at the same time, I want to make something that, if you’re seeing it daily year after year, has the capacity to grow and develop new meanings.”

What are the different properties of pennies and buoys? How do they juxtapose? What do you think the juxtaposition means?

Why do you think the piece is titled The West? What objects or ideas do you associate with the west? Which “West” do you think Lipski is referring to? The western hemisphere? The American West? Seattle? Discuss the reasons for your answer.

Do you think Lipski is a conceptual artist? Why or why not?

Gather one type of small object; for instance, push pins or tacks, bottle caps, yogurt cups, plastic spoons, toothpicks, etc. Collect as many as you can, and place the objects together to create your own sculpture. Try to add at least one element or object that contrasts with the other objects.

Lipski made another sculpture of a single buoy and covered its surface with gaming dice. He titled that work Bad Buoy—a pun alluding to the casinos on cruise ships that operate offshore where American gambling laws do not apply.

The West was originally shown indoors, in a commercial gallery. With a diameter of five feet, the buoys are about life-size; they neither tower over the viewer nor appear as mere objects. Yet their placement, whether indoors or out, seems to impact the viewer’s perception. What if The West was exhibited indoors? How would that change your interaction with the sculpture? Would it seem larger? Smaller? Does a sculpture’s placement or architectural context matter? Why do you think some Landmarks sculptures are located indoors and others outside? Use examples.

Conceptual artist - an artist concerned first with concepts or thoughts
Elaborate - complex, ornate; fullness of detail
Found objects - disparate objects found by chance in the environment
Irony - an expression (words or images) that has the opposite of the literal meaning
Juxtaposition - the act of placing two or more things side by side
Pun - the humorous use of a word in a way that suggests two or more of its meanings or the meaning of another word similar in sound