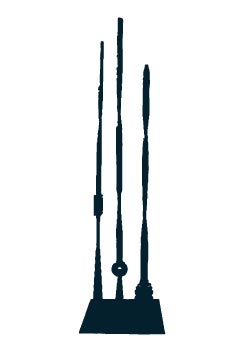 Beverly Pepper was born in Brooklyn, New York in 1924. Before becoming a sculptor she was a painter. She studied in France and Italy with master sculptors like Fernand Leger, Alexander Calder, and David Smith. Pepper was one of few female sculptors working in metal, and one of few sculptors to fabricate their own works (most artists had their large metal works made in factories). Beverly Pepper is interested in expressing timeless human experiences and emotions through geometric forms. This is a style called Geometric Abstraction. In Harmonious Triad, the artist created three columns that are alike but unique. By placing them in a row, these three similar objects create a composition that is interesting and varied while still having unity and balance as a whole.

What human experiences or emotions might Pepper be representing in this work? Why do you think so?

How does the title influence our understanding of the work?

Using styrofoam as a base, insert popsicle sticks or chopsticks into the foam so they stand vertically. Experiment with arranging them so as to create a composition that utilizes visual harmony and unity. Try using equal numbers of vertical lines and repetition to achieve this.