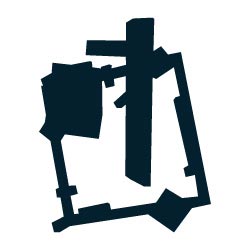 New York native Joel Perlman received his Bachelor’s of Fine Arts (BFA) degree from Cornell University in 1965 and then attended the Central School of Art in London. He obtained his Master’s (MA) degree from the University of California, Berkeley, in 1968. Like Anthony Caro, Robert Murray, and Beverly Pepper, Perlman relied on purely visual aesthetics for his works. Using industrial-grade steel plate, he made geometric abstract sculptures, usually for outdoor display.

Perlman’s works of the 1980s are pictorial, that is, essentially flat arrangements best seen from a frontal viewpoint, like a painting. Square Tilt is typical of Perlman’s best-known compositions, which suggest windows or gateways. Often, a square or rectangular frame surrounds a large opening. Smaller rectangles of steel plate are attached to the frame. Perlman joined positive shapes to create Square Tilt, but equally important to the composition (and to the artist’s process) is negative space.

Walk around the sculpture, looking through it to the negative space. How does the environment of the sculpture influence how you see it?

Sometimes this sculpture is placed indoors. How might it change when placed indoors? What would you be likely to see through the “portal”?

How would this sculpture feel different if Perlman used organic shapes rather than geometric ones?

Perlman worked on this sculpture in a studio in New York City. Looking out his windows, he could see the high rises of the city. How do you think the space of his studio might have influenced this sculpture?

Joel Perlman begins a new sculpture by collecting steel and cutting out shapes, at least twice as many as he thinks he will use. These shapes are the basic elements that Perlman will assemble into a complete visual statement. Cut out regular and irregular shapes from cardboard or foam core. When you are done, create a sculpture. Try to think about the space around objects as well as the objects themselves.

Perlman says he loves welding steel: “It’s like magic. Touch a rod to metal, there’s a flash and buzz, and two pieces become one.”

Compare Square Tilt to Anthony Caro’s Veduggio Glimpse, Robert Murray’s Chilkat, and Beverly Pepper’s Harmonious Triad. Think about these artists’ interest in pure form. Then think about how the sculptural forms are different. While not figurative works, each of the sculptures might evoke images of familiar forms.

Abstract - expressing a quality apart from the way an object appears to the eye; the opposite of realistic
Aesthetics - a particular conception of beauty or art; a taste for or approach to what is pleasing to the senses
Geometric - based on simple geometric shapes, such as straight lines, circles, or squares
Pictorial - relating to a painter, a painting, or the painting or drawing of two- dimensional pictures