During the Spring 2019 semester, I studied abroad at University College London where I took a course entitled “Theory and History of Conservation” with Dr. Rebecca Gordon. For my final paper, I opted to write on Sol LeWitt’s wall drawings because I had previously studied his wall drawing in the Landmarks collection during an art history course I had taken at UT.

LeWitt’s wall drawings were created by the artist as a set of instructions, which could then be executed by any artist or draftsman who followed the instructions. The central question in my paper was: should iterations of the wall drawings be conserved as unique artworks, or simply painted over and executed anew when they begin to degrade with time?

Most fine arts conservation focuses on preserving the material integrity of art objects. Since the primary component of Landmarks’ wall drawing is the concept, the physical execution of the wall drawing takes the backseat. The physical wall drawing is subject to the same wear and tear as more conventional art objects: visitors might accidentally cause damage; pigments may change or fade with time; walls deteriorate and paint flakes. Conservators are then faced with the decision of whether to actively restore and maintain their wall drawing, or paint over the wall and re-execute the wall drawing.

I had the opportunity to sit down with Nisa Barger, Landmarks’s assistant director for collections, to ask her a few questions on this topic. 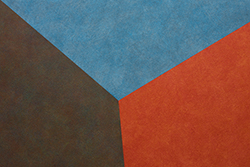 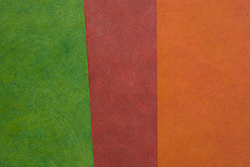 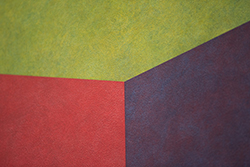 What is Landmarks’ long-term plan for conservation of Wall Drawing #520?

The plan has been to deal with issues as they arise. In terms of repairing damage, we have our conservator in-paint the small scratches and gouges with reversible pigments. We’ve also made an effort to anticipate potential damage and plan preventatively. We put up a barricade as part of the care plan, anticipating that people were going to want to lean up against that wall.

Eventually, we will have to repaint the whole work, if for example the thing is starting to fade in a way that makes the colors not in keeping with the original intention of the piece, or portions of it fade to where there is a large differential in the color from one wall to another. Landmarks has conservatively budgeted for repainting every 8 years, which we probably won’t have to do.

If the building that hosts the Wall Drawing is fundamentally changed at some point in the future, we could reinstall the work elsewhere on campus with permission from the LeWitt estate. It would probably have to conform to certain requirements – this [wall drawing] is made for three walls it’s installed on, so the new site would have to have the same number of walls.

What would be involved in reinstalling the Wall Drawing?

Repainting at the same location would mean a full reinstallation in coordination with the LeWitt estate and their draftsmen. The work would use the same pigments and be the same colors. The wall texture and finish have to be very specific, so that may require sanding down the wall and dealing with the texture first. If the work were reinstalled in a new location, the estate’s draftsman would redraft it for the exact wall dimensions and be as involved in the process as they were in the initial installation. 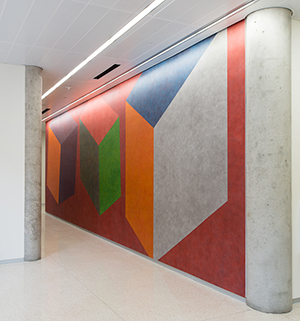 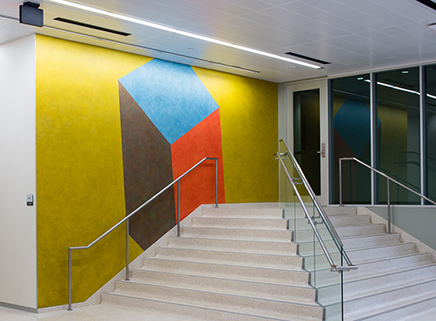 Could you tell me a little about Landmarks’ conversations with the LeWitt estate in the process of the original installation?

The first LeWitt project Landmarks undertook was the Circle With Towers, which was a piece originally made for the Madison Square Park Conservancy. When we purchased the work, we were put in touch with the estate, who then put us in contact with their concrete structure expert, Jeremy Ziemann. He was in communication with us through all the planning phases and construction, and remains someone we talk to whenever conservation issues arise.

In the sale, we agreed to make best efforts to work with the LeWitt estate’s fabrication consultants. Their fabricators are people who worked with the estate while LeWitt was alive and have developed a certain level of expertise, and working with them is the estate’s way of ensuring that the creation of these structures meets their standards and expectations.

Megan McKenzie is a fourth-year undergraduate at the University of Texas at Austin pursuing a double major in Art History and Plan II.