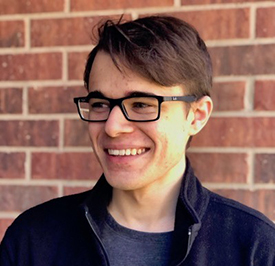 Landmarks recently announced the return of Sound in Sculpture, our annual collaboration with the Butler School of Music and Texas Performing Arts. Launched in 2015, the event features musical compositions by student composers, all created in response to works in the Landmarks collection. Due to COVID-19, this year’s performance will be streamed on Vimeo on April 22 at 7:00 PM CST.

In advance of the program, we sat down with one of this year’s composers, Thomas Rodriguez. A 3rd year undergraduate student pursuing a Bachelor of Arts in Music and a Minor in Arts Management and Administration, Rodriguez wrote a work inspired by Joel Perlman’s Square Tilt.

LM: What was your introduction to music?

TR: I was first introduced to music at a very young age. My parents would play classical when I would go to sleep. My next big introduction was from the video game Rock Band. It inspired me so much and taught me how to play the drums. I’d say the biggest thing that got me to realize my passion for music was high school band. I thoroughly enjoyed marching band and concert band. All of it really expanded my taste in music, not to mention how much fun it is to play cool music with your friends.

LM: What influence does visual art have on your music?

TR: I’d say visual art does have an influence, but it’s a bit of a backwards one. As I’m writing, the music tends to conjure up abstract images or actions, and I sometimes write towards those concepts that I’m thinking about.

LM: Do you have a favorite work in the Landmarks collection?

TR: I might be a bit biased, but I think Amaryllis is probably my favorite. For me it’s actually been quite a constant in my musical journey in Texas. It was the drop-off place when I commuted to Longhorn Music Camp in middle school and I passed by it when I went to rehearsals with the Texas Youth Wind Symphony. There is also a tradition where the Longhorn Band circles around it and plays “Texas Fight” after UT games.  So, I’d say it’s a sort of reminder of where I’ve come from.

LM: How do you typically begin composing music compositions?

TR: It depends. It’s usually a mix of musical ideas that pop up, noodling on the clarinet, and a sort of “prompt”— usually a few words or so.

LM: What was the process like composing a work for Sound in Sculpture?

TR: Initially, I went for a very theoretical approach, matching parts of the sculpture with specific notes or figures. But as I tried it, I found this process to be a bit disingenuous – though the part that I did keep from that exercise was writing for a brass quartet, since Square Tilt is a metal sculpture. What ended up happening was a sort of middle ground, a structuring of the piece around different views of Square Tilt, specifically looking at the frame, and looking through the negative space (the “portal”).

LM: What did you learn from the process and did it change your view of the work?

TR: This process made me realize how much thought goes into creating these sculptures. We often go about and pass them by, not realizing their intricacies. They’re almost “ambient” in a way. It was also interesting to see how Square Tilt fits into Joel Perlman’s artistic path, moving from angular works to more rounded and circular ones.

Join us April 22 at 7:00 PM CST when Rodriguez’s work premieres during Sound in Sculpture.