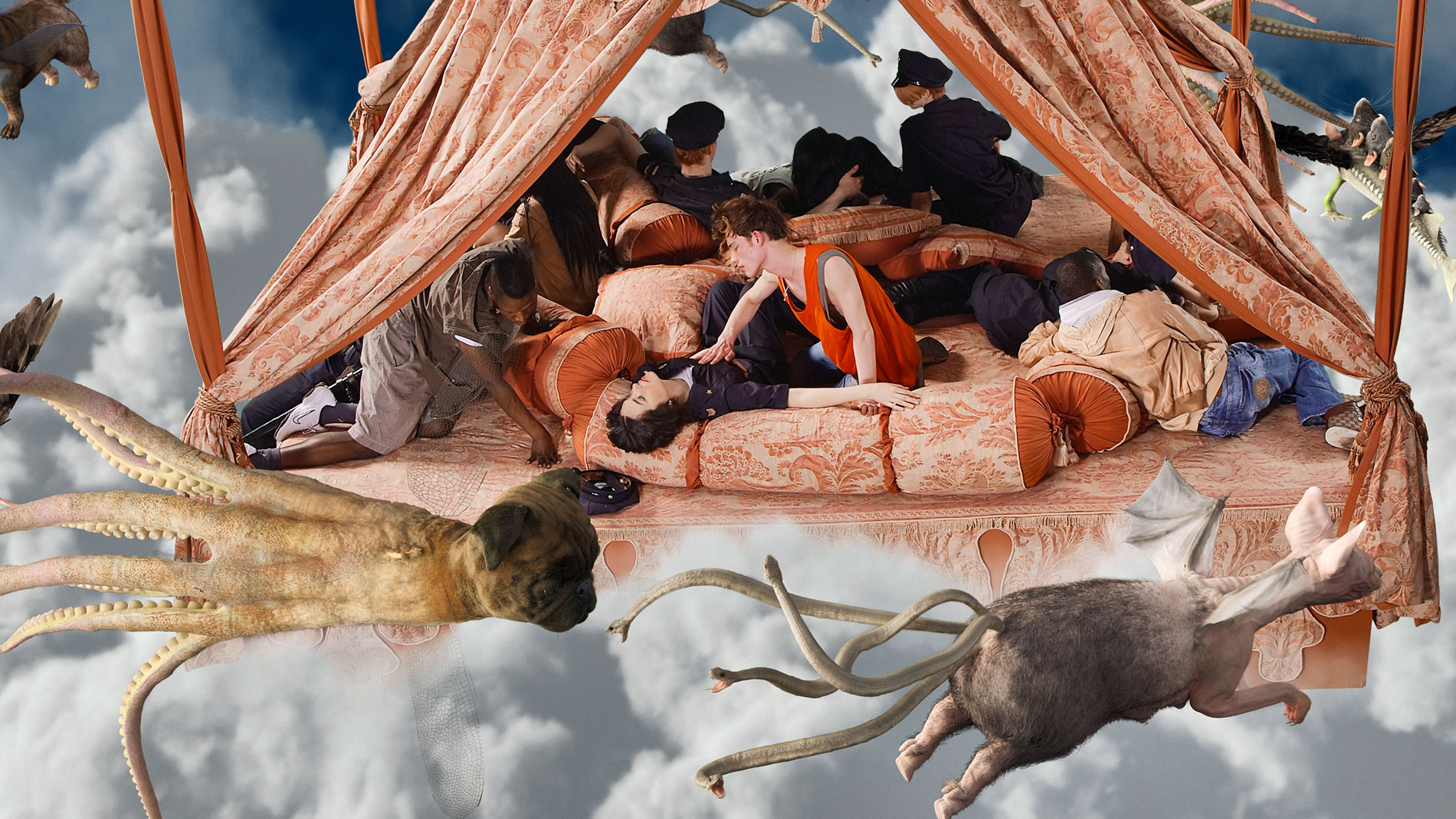 The Russian collective AES was originally formed in 1987 by conceptual architects Tatiana Arzamasova and Lev Evzovich and multidisciplinary designer Evgeny Svyatsky, who created the group’s name using the first letter of their surnames. In 1995, the group expanded to include fashion photographer Vladimir Fridkes and become AES+F.

AES+F’s highly aestheticized practice probes the conflicts and contradictory nature of contemporary society and Western cultural values. Their recent work presents grand visual narratives developed at the intersection of video, photography, and digital animation. These large-scale installations combine the iconographies of advertising, video games, fashion photography, and science fiction movies along with that of Old Master paintings and mythological stories and symbolism. Via seductive, surrealistic imagery, AES+F questions the boundaries between good and evil and blurs the lines between reality and fantasy.

Their prescient work Islamic Project began in 1996 as a performance and public intervention that asked audiences to examine their conceptions of Islam. AES+F created a fictitious travel office called AES Travel Agency to the Future, which distributed materials from a future in which the influence of Islam has taken over Western culture in the form of cultural and architectural transformations across the globe. In one image, New Liberty, the Statue of Liberty’s face is covered by a burka and she holds a Quran. In another, AES+F eerily and prophetically depicts the New York skyline without the Twin Towers. According to the artists, the Islamic Project “works as a kind of psychoanalysis—visualization of fears in Western society about Islam.”

Suspects: Seven Sinners and Seven Righteous (1997) also plays on viewers’ fears and prejudices. The photographic series contains seven images of ordinary Moscow teen girls, aged eleven to fourteen, with seven other seemingly innocuous girls who happened to be convicted murderers. However, AES+F does not label the photographs, leaving viewers to determine which of the fourteen girls are the “sinners.” The piece not only suggests that criminality is not physically perceptible but also indicates that anyone, even the most unlikely people, are capable of ruthless acts.

In a macabre but inventive manner, another photographic series, Défilé (2000–07), juxtaposed the exclusivity and temporality of high fashion with the inevitably and permanency of death. AES+F photographed corpses in various states of decay and rigor mortis on light boxes. They then digitally dressed the bodies in extravagant fashions. In many cultures, death often is “decorated” in rituals. Therefore, fashion is a way to handle the fear of death and attempt to ward it off. At the same time, the work comments on the extreme income inequality and social stratification of Moscow, a city in a largely impoverished country that is home to some of the wealthiest people in the world. They can be seen on the streets dressed in designer clothes along with elderly panhandling babushkas. However, just as poor anonymous people often are found dead in the snow, so too are wealthy victims of contract killings orchestrated by their political and business rivals.

AES+F soon began producing multimedia works and video installations that incorporate animated photographs of characters into environments built in 3DS Max, an animated 3D program. According to AES+F, “In some sense this is closer to classical painting than photography and video, which are based in documenting.” The group soon achieved worldwide recognition at the 52nd Venice Biennale in 2007 with Last Riot (2007). This large-scale, multichannel video installation was the first part of AES+F’s Liminal Space Trilogy, and was followed by The Feast of Trimalchio (2009) and Allegoria Sacra (2011).

The epic, dreamlike works are set respectively in a video game landscape, an exotic luxury resort, and a futuristic airport, which are meant to correspond to the art historical tradition of depicting hell, heaven, and purgatory.     Last Riot features spectacular disasters and the bloodless combat of teenagers acting in battle scenes atop a snowcapped mountain. The imaginary island in The Feast of Trimalchio is inhabited by hosts and guests of various races and ethnicities who eventually switch roles and live out their fantasies of pleasure and leisure as well as hyper-consumerism. Finally, a diverse group of travelers in Allegoria Sacra wait endlessly and interact with each other amid a landscape that evolves from tundra to desert to jungle, and finally an endless river Styx.

Rather than dialogue, the films rely on classical scores to accompany the actors, who display aloof gazes and move in slow motion against green-screen digital backdrops. While the works in the trilogy depict imagined futures as they allude to art histories of Baroque painting and Romanticism, they nonetheless raise questions about contemporary Western vices and values.

Inspired by the medieval carnival and the ancient Roman festival of Saturnalia, in which social roles and norms reverse, Inverso Mundus upsets viewers’ expectations of contemporary life, but seems to represent the personal desires of many to switch status with those in power. However, AES+F visualizes such reversal in a peaceful, pleasurable way, rather than as a violent rebellion. In this way, observing the opposite of everyday life might suggest the absurdity or the ingrained, but not necessarily inherent, nature of what we deem to be normal. —Kanitra Fletcher