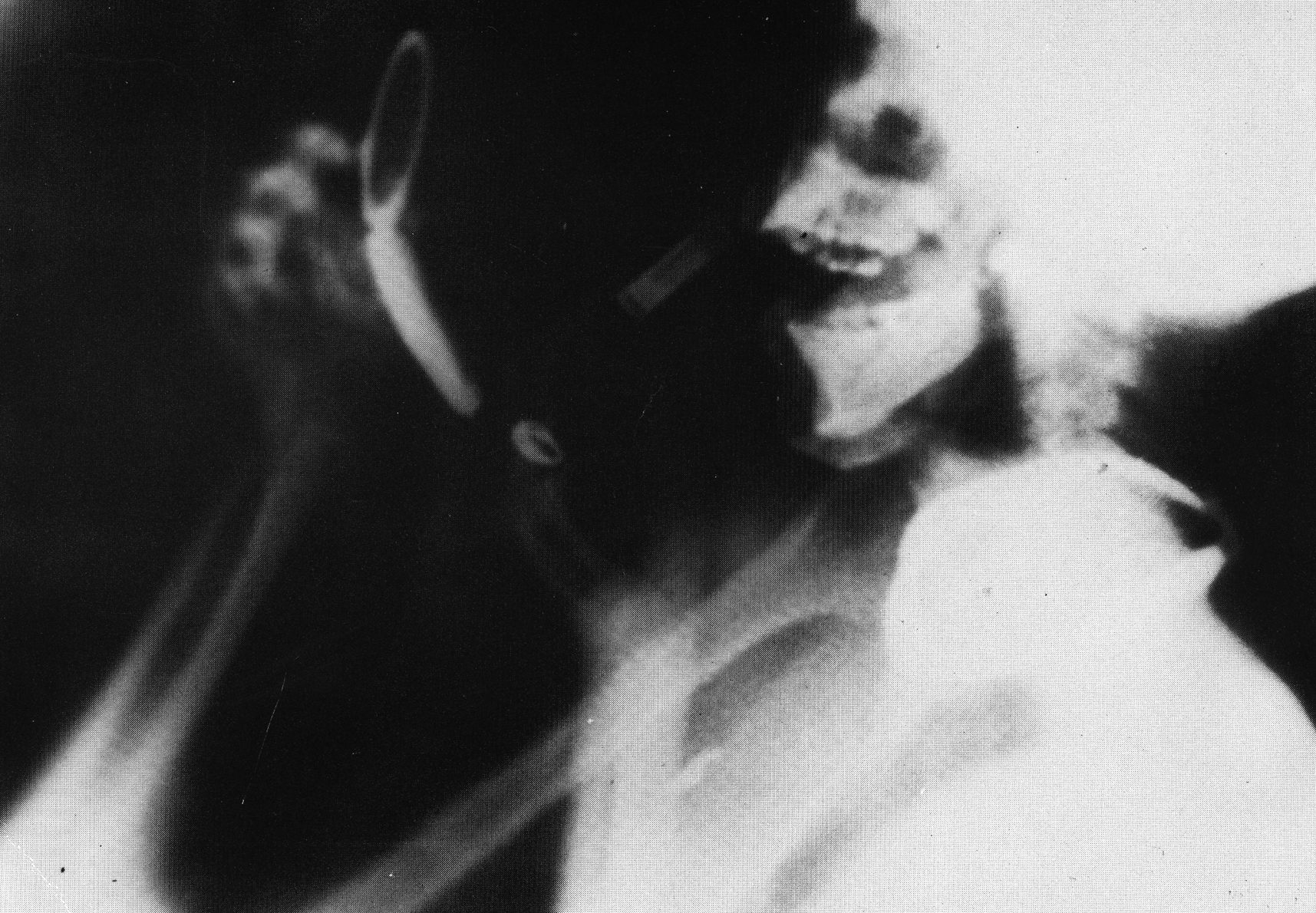 As a young child, filmmaker and video artist Barbara Hammer (born 1939, Hollywood, California) was encouraged by her mother to be pretty and feminine, to emulate child stars like Shirley Temple. When she came of age, however, Hammer longed to express herself behind the camera rather than in front of it. She studied psychology and English literature at UCLA, and in 1968, she realized her dreams and made Schizy, her first Super 8 experiment. Hammer went on to receive her master’s in film from San Francisco State University in 1973. The following year, she came out as a lesbian, left her marriage, and filmed Dyketatics, which is widely considered the first lesbian film.

Shot in black and white in the Bay Area, the first half of the four-minute film depicts nude women in nature, dancing, laughing, and bathing and touching one another. The second half moves indoors to a house, where we watch Hammer and another woman engage in real, highly charged lovemaking, something that Hammer, who now lives and works in New York City, had no idea would be groundbreaking. She recalls, “I was lucky when I made Dyketactics. I didn’t realize that it was the first lesbian film made by a lesbian. I would have been so afraid and intimidated. Instead, I just burst out and let my energy carry me through my work. In some ways being alone was great. There was a blank screen and I was filling it. That was a thrill.”

More than eighty works would follow, including her first feature film, Nitrate Kisses (1992), which was nominated for the Grand Jury Prize at the 1993 Sundance Film Festival and included in the 1993 Whitney Biennial. Other accolades include the Moving Image Award from Creative Capital in 2000; the first ever Shirley Clarke Avant-Garde Filmmaker Award from New York Women in Film and Television in 2006; the Teddy Award for Best Short Film for A Horse is a Not a Metaphor (2008) at the 2009 Berlin International Film Festival; and a Guggenheim Fellowship in 2013. Retrospectives of Hammer’s work have been presented at the Museum of Modern Art, New York; Reina Sophia, Madrid; Jeu de Palme, Paris; National Gallery of Art, Washington, DC; Tate Modern, London; and the Toronto International Film Festival.

Hammer’s body of work established her as a pioneer of queer cinema. Her early films from the 1970s are mostly experimental shorts, such as Dyketactics, Superdyke (1975), and Women I Love (1976), which intercut portraits of Hammer’s friends and lovers with playful arrangements of fruits and vegetables. The shorts range in length from three to twenty-five minutes and explore critical themes of lesbian representation, subjectivity, and sexuality. “My work has always been about dealing with subjects that haven’t been brought forth,” Hammer explains.

Nonetheless, because of her unabashed women-only portrayals of joyous lesbian sexuality and female sexual pleasure, many critics have labeled her work as essentialist, claiming she reduced female identity to a woman’s body and subscribed to the notion that male and female differences are biologically determined and not socially constructed. However, Hammer never claimed to believe in the idea of a female essence, but she does believe in the urgency of lesbian visibility on screen and in life. She states, “My work makes these invisible bodies and histories visible. As a lesbian artist, I found little existing representation, so I put lesbian life on this blank screen, leaving a cultural record for future generations.”

Hammer’s propensity to illuminate people and topics that have been excluded and relegated to the margins of history also extends to matters of aging, illness, death, and dying. In Optic Nerve (1985), she related the fragility of film to the process of aging, specifically that of her dying grandmother. The film reflects on a visit to her grandmother’s nursing home through a layered, abstract presentation of the filmstrips that document the event. In other works, Hammer cares for and caresses a human skeleton (Vital Signs [1991]), and 8 in 8 (1994) she compiled a series of brutally honest, face-to-face interviews with female cancer survivors.

Upon learning of her own cancer diagnosis, Hammer continued her filmic research on the subject. Scored by Meredith Monk, A Horse is Not a Metaphor is an autobiographical film reflecting on the artist’s own fight against stage 3 ovarian cancer. Hammer’s multilayered film “moves from scenes of chemotherapy sessions to images of light and movement that take her far from the hospital bed…transforming illness into recovery.”

Certainly Hammer never abandoned her commitment to the representation of marginalized sexualities. Nitrate Kisses (1992), Tender Fictions (1995), and History Lessons (2000), a trilogy of feature-length films on gay, lesbian, and queer identity, blur the lines of documentary, performance, and activism. The first part of the series, Nitrate Kisses, interweaves archival and contemporary footage to examine so-called deviant sexualities—S/M lesbianism, mixed-race gay male lovemaking, and the sexual practices of older lesbians. For Hammer, the film “questions how history is recorded and encourages the viewer, gay or straight, to save scraps, letters, books, records, and snapshots in order to preserve our ‘ordinary’ lives as history.”

With Sanctus (1990), Hammer combined many of the themes and techniques of production central to her practice. She rendered the invisible visible, explored facets of the female body, utilized found footage, and engaged with the material dimension of film. Both black and white and color, Sanctus comprises moving x-rays of female subjects shot on 16mm film. Originally the footage was made in the 1950s by Dr. James Sibley, an amateur filmmaker and medical doctor who used cineradiography to show what it looks like inside a moving living body. Hammer found the footage in an unopened box in the archives at George Eastman House in Rochester, New York, and edited the films, along with imagery of medical texts and diagrams, together to create layered, unconventional depictions beneath the skin of women performing various mundane tasks for the camera, such as drinking milk, washing their hands, and applying cosmetics.

On the one hand, Hammer’s film suggests the fragility of structure and mechanics of the human body as we observe the delicate armature of bones surrounding vulnerable organs. Moreover, Hammer stated, “In making Sanctus I was concerned about the contradictory qualities of beauty and danger of the images that were made by radiation. I delighted in the imagery and at the same time I imagined the deleterious effects of the image making on the subjects.” Nonetheless, Sanctus is a continuation of Hammer’s career-long affirmation of female subjecthood. With a striking manipulation of the imagery and a grand operatic score, the film vibrantly celebrates the survival of, and preserves the presence of, these anonymous female figures in celluloid. —Kanitra Fletcher