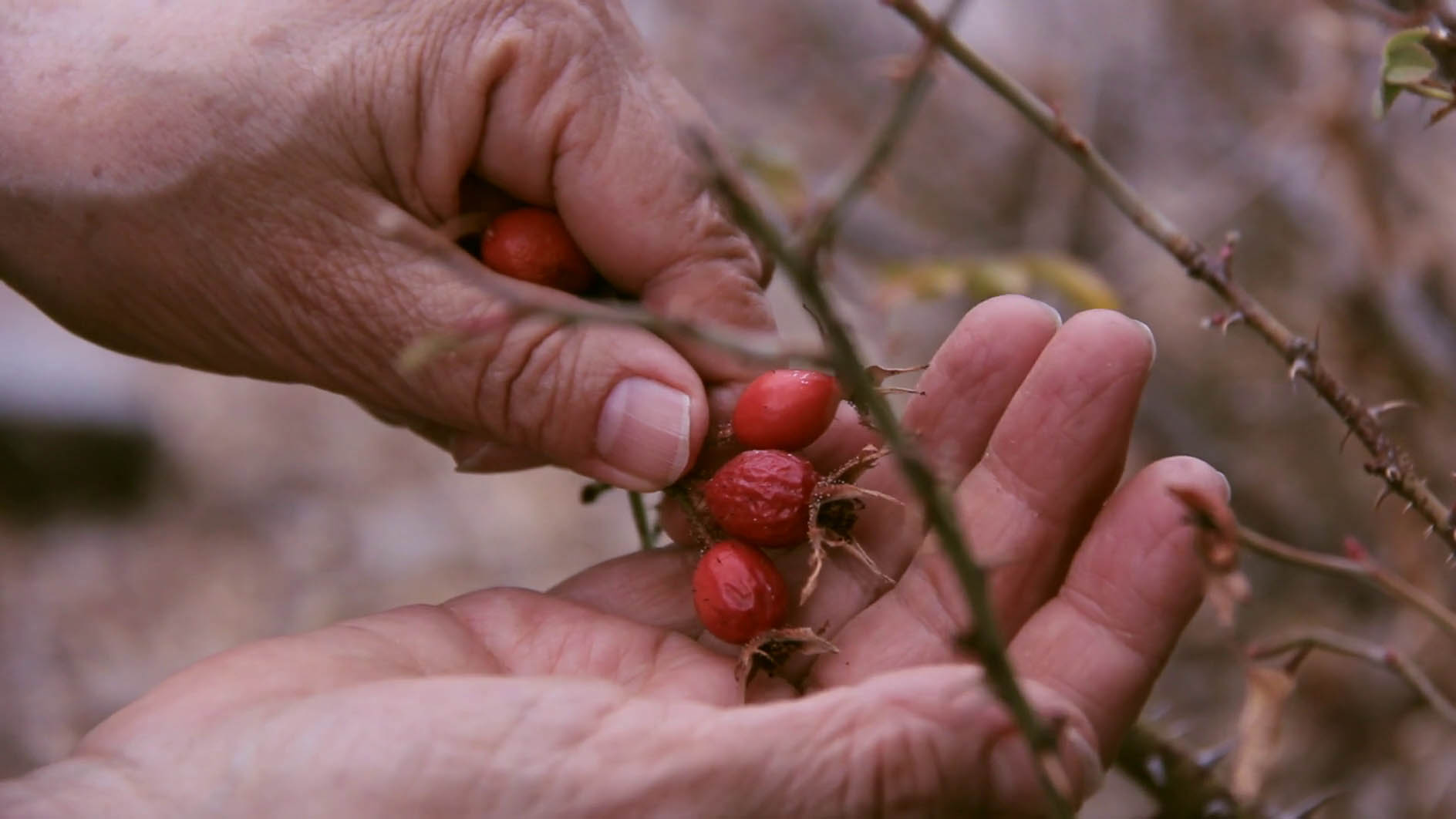 “A sound is the seed of the universe. A genetically altered seed breaks the earth’s rhythm. Only a collective gesture of love can turn back destruction.” This inspired, instructive quote—accompanied by a tender, expressive chant by Cecilia Vicuña (b. 1948)—begins Semiya (Seed Song) (2015).  In it, we watch poet, artist, filmmaker, and activist Vicuña forage for endangered native seeds in the foothills of the Andes Mountains in Colchagua, Chile. Periodically the camera pauses on close shots of her hands grabbing stalks, her fingers entering a stream, and her palms holding her findings—gray-tentacled orbs, light brown spheres, orange oval berries, and long dark brown pods. Semiya showcases a great variety of species as well as Vicuña’s interconnectedness with her surroundings through touch, smell, sight, sound, and, potentially, taste. This relation between environmental elements and human senses suggests the sufficiency of nature. Semiya asserts that its diversity of forms and life-sustaining, stimulating qualities need not be altered, but rather embraced, both literally and figuratively.

This 2015 piece recreates and continues Vicuña’s work on behalf of seeds, which began in 1971, in Santiago de Chile. Since the early days of her career, she has privileged the natural world and indigenous knowledge in her artmaking. The most celebrated forms of her creative output are based on khipu, an ancient Andean form of storytelling and recordkeeping communicated through knotted ropes. Vicuña’s interpretations, or “quipus,” are often monumental multicolored, multi-knotted lengths of textiles hung from ceilings. They fill gallery spaces and become room-sized installations, in which visitors are encouraged to become immersed. Long ago, khipus were banished by Spanish conquistadors, who believed they were demonic carriers of secret messages, in a quest to convert Andean cultures to Christianity. Vicuña sees her weavings as a form of cultural memory and an effort to recover cultural practices that have been erased.

Her work also is a refusal to be indifferent and look away from other forms of more recent destruction, in particular that of the environment. For more than fifty years, Vicuña has been concerned with climate change, the destruction of the planet, and extinction of species. Her art is a constant act of reclamation and refocusing on the violence we commit against our own futures. Vicuña conversely responds in a poetic, delicate manner as seen in another acclaimed series, “precarios,” which features small, ephemeral sculptures made of materials like rocks, sticks, feathers, and driftwood found on seashores and in natural settings. First created on the Chilean beach Concón in 1966, the tiny arrangements often are adorned with thread and serve as protest tools against the disposability and displacement of flora, fauna, wildlife, people, languages, and traditions, all of which factor in the widespread ignorance toward climate change.

Made during Vicuña’s preparation for an exhibition of her work in Denmark, Semiya foregrounds Vicuña’s process of gathering materials ostensibly to be incorporated into precarios or woven into quipus. The video gives viewers a broader perspective on Vicuña’s artistic practice, demonstrating how the work exists outside the gallery space, originating from and extending to the natural world. Also a rejection of the Western notion of the artistic genius, Vicuña’s self-effacing approach suggests she functions as a conduit for, rather than a creator of, the work, which ultimately will be realized through “only a collective gesture of love.”—Kanitra Fletcher