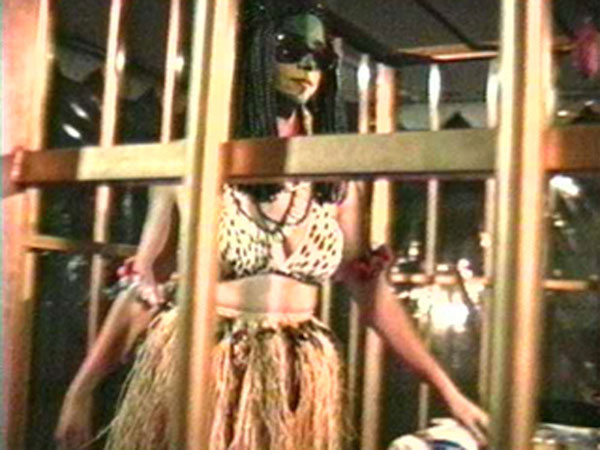 “From 1992 to 1994, I danced, somewhat pathetically, at numerous international festivals and biennials while my masked partner wowed onlookers with his guttural mix of Nahuatl phonemes and global brand names. For hours on end, Guillermo and I paraded around the confines of a golden cage pretending to be hitherto undiscovered Amerindians, as people stared, grimaced, chuckled, and wept. We were taken to the bathroom on leashes by docents and fed by businessmen who paid for the honor of peeling bananas and stuffing them in our mouths. We were jeered at, burned with cigarettes, courted, and cheered. We remained expressionless as our visitors peppered docents with questions about our sexual habits and suspiciously light skin or expressed their outrage at the sight of caged human beings surrounded by a visibly enthralled public.”

This was Coco Fusco’s experience of Two Undiscovered Amerindians Visit the West (1992–94), the traveling performance documented in the film The Couple in the Cage: A Guatinaui Odyssey (1993). Five hundred years after Christopher Columbus’s arrival in the Americas, Fusco and Guillermo Gómez-Peña exhibited themselves as caged Amerindians from an imaginary “undiscovered” island in the Gulf of Mexico they named Guatianaui. The work is indeed an odyssey, literally and figuratively, which took its creators—Fusco, Gómez-Peña, and filmmaker Paula Heredia—across three continents and to nine major cities whose histories are steeped in the exploitation of indigenous peoples.

They traveled to Madrid, London, Sydney, Buenos Aires, Chicago, Minneapolis, Washington, D.C., New York City, and Irvine, California, aiming to re-enact the idea of Otherness, not represent an actual culture. The work was meant to be a satirical commentary on the historical practice of exhibiting human beings from Africa, Asia, and Latin America in Europe and the United States in zoos, theaters, and museums; nonetheless, The Couple performed before many onlookers who believed the scenario was real.

Fusco, a Cuban American video and performance artist, curator, and scholar, played the female Amerindian. Born in 1960 in New York City, she received her BA in Semiotics from Brown University in 1982, MA in Modern Thought and Literature from Stanford University in 1985, and PhD in Visual Culture from Middlesex University (England) in 2007. She has held professorships at Temple University, Columbia University, and Parsons The New School for Design, and currently teaches at MIT as an MLK Visiting Scholar. Fusco’s art and scholarship draws on her Cuban heritage and uses performance and multimedia to explore politics of war, race, gender, and difference.

Gómez-Peña, the male Guatanaui, is a Chicano writer, activist, performance artist, radical pedagogue, and MacArthur fellow. Born in Mexico City in 1955, he studied Linguistics and Latin American Literature at National Autonomous University of Mexico (UNAM) from 1974 to 1978. Gómez-Peña moved to the United States in 1978 and studied at California Institute of the Arts, earning a BA in 1981 and an MA in 1983. He is is the director of the performance art troupe La Pocha Nostra. Devoted to crossing and erasing borders between art and politics, art practice and theory, artist and spectator, La Pocha Nostra is a trans-disciplinary arts organization that provides a support network and forum for rebel artists of various disciplines, generations, and ethnic backgrounds. Using their bodies and language as primary tools, La Pocha Nostra’s collaborations are founded on the ideal: "If we learn to cross borders on stage, we may learn how to do so in larger social spheres."

Heredia filmed the Guatianaui Odyssey. She was born in 1957 in San Salvador, El Salvador and is based in New York City and Suchitoto, El Salvador. Heredia grew up in El Salvador, Honduras and Costa Rica. She studied fine arts at the University of Costa Rica and filmmaking at NYU and has an Arts and Film degree from the State University of New York. Since 1987, Heredia has worked as a director and film editor of documentaries. In 1996 she was awarded with an ACE-EDDIE (American Cinema Editors Award) for her work on Unzipped, a documentary portraying fashion designer Isaac Mizrahi. And her production of the HBO film In Memoriam, NYC 9/11/01 earned her a Primetime Emmy for Outstanding Picture Editing for Non-Fiction Programming in 2002.

Together they collaborated to signify Otherness. Inside a ten-by-twelve foot cage, Fusco wore a leopard print bikini top, grass skirt, sunglasses, baseball cap, Converse high tops and her hair in braids. Gómez-Peña donned a headpiece, breastplate, gold jewelry, studded collar, and a Mexican wrestling mask. They surrounded themselves with various props or fetish objects, such as a plastic snake, bottle of Coca-Cola, and TV-topped altar. The couple also performed “traditional tasks,” which ranged from sewing voodoo dolls to watching television.

Aside from these practices, The Guatinauis allowed interested members of the audience to pay for “traditional” dances (to rap music) and “authentic” stories (narrated in a made-up language) and to feed them and pose with them for Polaroids. Some visitors made offerings and sent notes of sympathy, while others verbally threatened, physically attacked and sexually harassed Fusco and Gómez-Peña. In light of these varied reactions, The Couple ultimately calls into question what actually is the “right” way to respond. However, rather than dictate what viewers should do or say, the project exposes real responses that seemingly mirror reactions to past ethnological expositions.

Accordingly, the documentary gives a historical dimension to Fusco and Gómez-Peña’s experiences. Heredia juxtaposes the performances with archival footage from past displays of indigenous people in which they were exhibited as ethnic curiosities and clips from Hollywood movies that portray cultural “exotics” and primitive “savages.” Juxtaposed with the modern-day treatment of The Couple, the footage demonstrates that, in terms of cultural politics, five hundred years is not as long a time as it seems. Despite being in post-colonial times, the foundation of Western thought is based on colonial ideas, and these concepts continue to influence our society’s approach towards non-Western cultures. The Couple in the Cage suggests that, rather than Fusco and Gómez-Peña, it is now viewers’ mentalities that need to be liberated. —Kanitra Fletcher