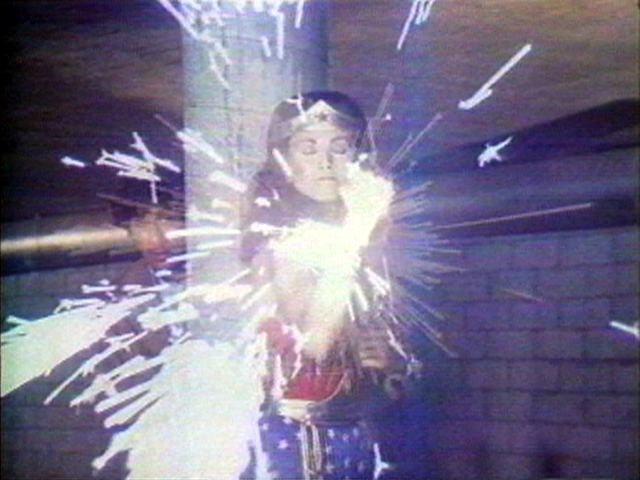 Inspired by her architectural background, American artist Dara Birnbaum holds an enduring interest in the ways in which people live. During the late 1970s, she turned her attention to television and video, which she saw as the architecture of the day, defining ways of life and how people inhabit public and private spaces. At that time, video art was an emerging genre, and Birnbaum was a major contributor to its development. She utilized the facilities of public television stations and developed sophisticated sound and video montages that would become the standard practice for video artists throughout the 1980s and beyond. Referred to by many critics as the “first pirateer of television imagery,” Birnbaum also sought a means to turn TV on itself. As she once stated, in her work, television “is manipulated before it manipulates us.”

Born in 1946 in New York, N.Y., where she continues to live and work, Birnbaum received her B.A. from Carnegie Mellon University in 1969, and her B.F.A. in painting from the San Francisco Art Institute in 1973. Following the receipt of a certificate in video and electronic editing from the New School of Social Research in 1976, Birnbaum’s work became heavily invested in the appropriation and deconstruction of televisual imagery. She understood it as coded, particularly in terms of gender, and her practice reflected a sustained search for what it means to be a woman and how that meaning has been constructed in the media. In (A) Drift of Politics: Two Women Are Active in a Space (1978), Birnbaum compiled shots of Laverne & Shirley in desperation. Kiss the Girls: Make Them Cry (1979) also comments on gender roles via footage of the game show Hollywood Squares. Birnbaum isolated the mannered gestures of celebrities, in which the women appear bashful and clueless, while the men seem self-satisfied and authoritarian. By the late 1980s, Birnbaum became increasingly interested in politics, especially as they are communicated via television. She documented student activism at Princeton University, and examined the role that the media played in the 1989 student uprisings in China. Today, Birnbaum continues to analyze the imagery of real-world politics via large-scale installation works.

The formal process of her earlier videos critiqued that of the small screen. Birnbaum selected popular programs that employed effective camera and editing devices. She would then deconstruct the language of those broadcasts, reducing and separating elements to expose the fundamental nature of televisual strategies. By repeating the often unnoticed production techniques, such as inserts, wipes, cross-cuts, and reverse shots, she revealed how television communicates ideologies via formal and technical means. Nonetheless, while Birnbaum’s manipulations challenge familiar representations manufactured by television media, her works do not dismiss popular cultural forms. In fact, they convey a sense of romanticism and provide instances of creative reinvention. This complex relationship is similar to that expressed in Pop Art. As a painting student, Birnbaum was greatly influenced by Andy Warhol, who built his career on the appropriation and repetition of mass-media imagery in his painting and sculpture. Likewise, Birnbaum captured and repeated imagery from television, but did so in video, perhaps most famously in Technology/Transformation: Wonder Woman (1978¬–79).

Originally shown on a cable station opposite the actual Wonder Woman program, Technology is a compilation of footage from the television series and is one of the first examples of the artistic appropriation of mainstream television imagery. The video opens with a round of explosive bursts of fire, seemingly indicative of the deconstructive purpose of the video, followed by the repetition of secretary Diana Price’s transformation into Wonder Woman. As the character spins around and around, the act borders on a fit of delirium. Further reiterations follow in which Wonder Woman repeatedly sprints, deflects bullets, and slices the throat of her image in a hall of mirrors in an effort to save a man. The second half of the video introduces the 1978 disco track “Wonder Woman in Discoland” along with a textual display of its suggestive lyrics. As the female singer coos, “I want to take you down and show you all the powers I possess,” she echoes Wonder Woman’s (pick-up) line from earlier in the video, “We’ve got to stop meeting like this,” as she runs off with a man.

These double entendres highlight the sexual source of Wonder Woman’s empowerment. Moreover, Technology suggests the “real” woman’s physical transformation replaces a psychological one. Just as television scenes and storylines are advanced by special effects and camerawork, Diana Prince/Wonder Woman’s transformation is also a technological effect and, thus, is surface. The character is framed as a “wonder,” yet her role and actions are hardly surprising. Instead, Birnbaum’s video offers an imaginative perspective, one that draws attention to the sexualized service of Wonder Woman and calls her identification as a role model into question. —Kanitra Fletcher