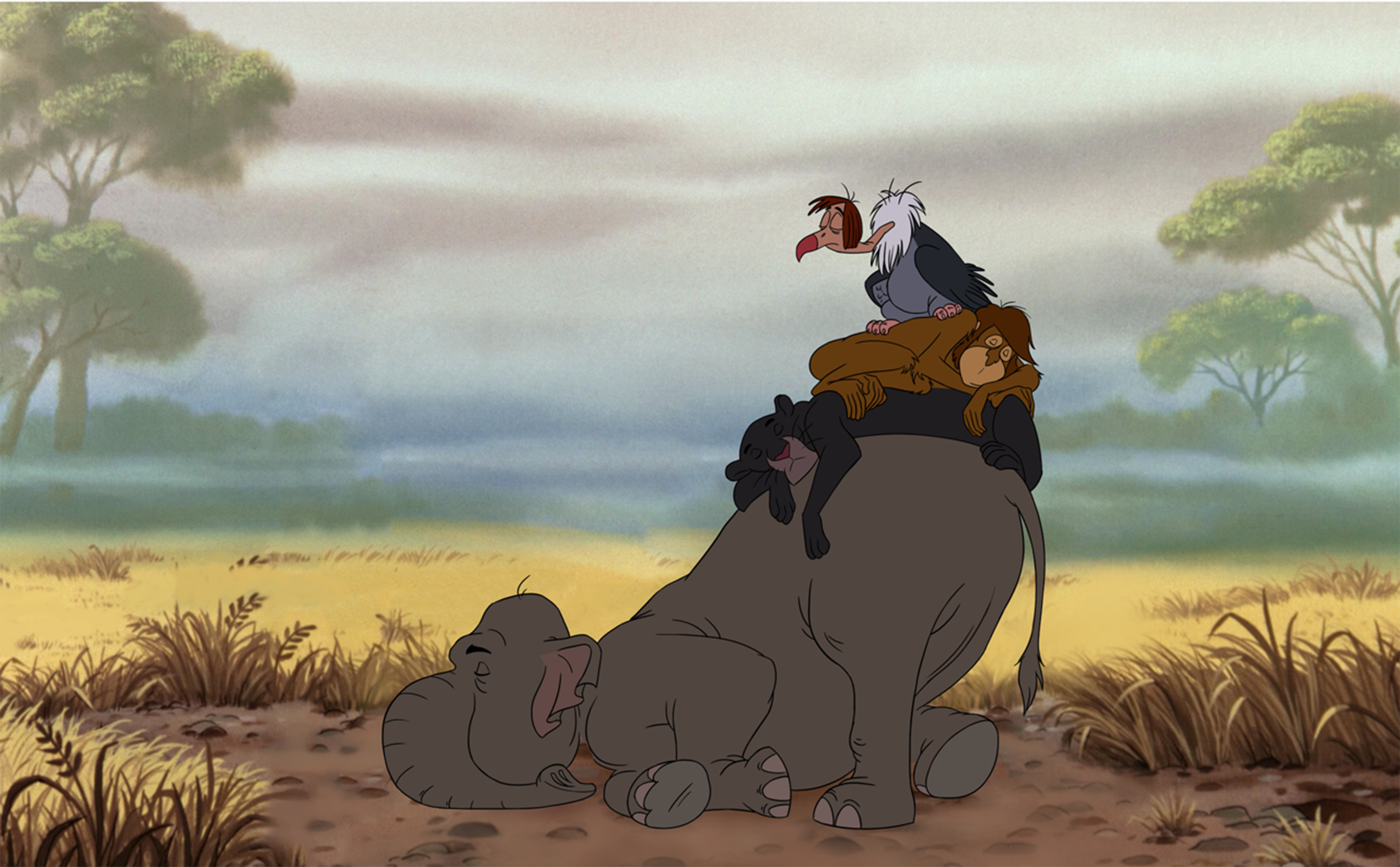 “I’ve always thought that one of the privileges that an artist has is to have time to waste,” mused Belgian artist David Claerbout. His video The Pure Necessity (2016) suggests the privilege of the artist might be shared with creatures in the natural world. For the video, Claerbout worked with a team of animators over the course of three and a half years to redraw all of director Wolfgang Reiterman’s frames for the Disney film The Jungle Book (1967). That film was loosely based on author Rudyard Kipling’s nineteenth-century “Mowgli stories” for children and features a parade of animals that sing, dance, and talk in the service of telling a story centered on the “man-cub,” or young boy, Mowgli.

As a response to the film, Claerbout disappeared Mowgli and aimed “to suck the life out of The Jungle Book and remove most of the animation, the energy, all the sugar, so to speak. To bring it to a state of exhaustion. I removed all the protein the movie was feeding generations after generations of viewers. I slowed down the rhythm, the tempo of the sequences. The result is uncanny, like looking at a grainy reproduction of something you thought you knew but no longer recognize, something on the verge of defamiliarization.” Specifically, the animals are no longer anthropomorphized in Claerbout’s film. There is no narrative or plot for them to follow, and they behave like the creatures they represent.

The title of the video is adapted from “The Bare Necessities,” the popular song sung by Baloo the bear in the original film. Claerbout’s substitution of “pure” suggests his version presents an untainted or less distorted view of the animals’ behavior. They instead do what is natural to their existence and essential to their survival. Claerbout also substitutes “The Bare Necessities,” “I Wanna Be Like You,” and other songs from The Jungle Book, with a soundtrack of ambient jungle noises—water, weather, and the distant calls of frogs, birds, and insects.

At the start of the video, the camera pulls away from a village, establishing distance from the human realm, to show a series of vignettes. We see a mother fox sleeping as her young cubs play tug-of-war with a stick. The panther, Shere Khan, leaps across rocks and later sleeps in a tree, Baloo the bear drinks water from a river and floats down it, and vultures sit in a tree, where they watch and wait.

The camera is neutral in its observation of the environment. Shots begin waiting for an animal to appear and the camera lingers after it has left with no explanation of the action offered. Despite, or due to, the unknowability of the motives or intentions of the animals, there are suspenseful moments, such as when a snake dangles over a sleeping panther extending its tongue closer and closer, or when a tiger crouches and closes in on a lone deer eating grass. Recalling The Jungle Book, one could easily expect a comic or tragic narrative to play out, but Claerbout deviates from those expectations and provides no resolutions.

The scenes run from day to night to day and so on, each focusing on a different species, until the final scene when we hear the melody of a distant female voice singing. A young woman soon appears, walking from the village to fetch water from the lake. She sings of her womanly duty to do so and how her child will do the same in the future when she is cooking in the home. While the lyrics are decidedly antiquated to twenty-first-century ears, the human girl’s presence feels jarring after a near-hour of observing animals in their habitat.

The girl seems entirely out of place, practically foreign, in the natural environment and her song is an example of the narrativizing that The Pure Necessity had dispensed with up until this point. Claerbout has dissatisfied viewers’ desires to see animals as surrogates for humans or their emotions, actions, and values; he refused the form of storytelling in The Jungle Book that misrepresents the natural world and reduces wildlife to a setting and sidekicks for human beings.  Moreover, the cartoon quality of the imagery is not matched with the comic activities, like that of The Jungle Book. There is an uncanniness and irony in seeing familiar characters act in ways that are unrecognizable for them, but natural to the animals they represent. These paradoxes of The Pure Necessity therefore highlight how deeply ingrained the narratives of Hollywood are and how far removed and unfamiliar the natural world is to our culture.  —Kanitra Fletcher