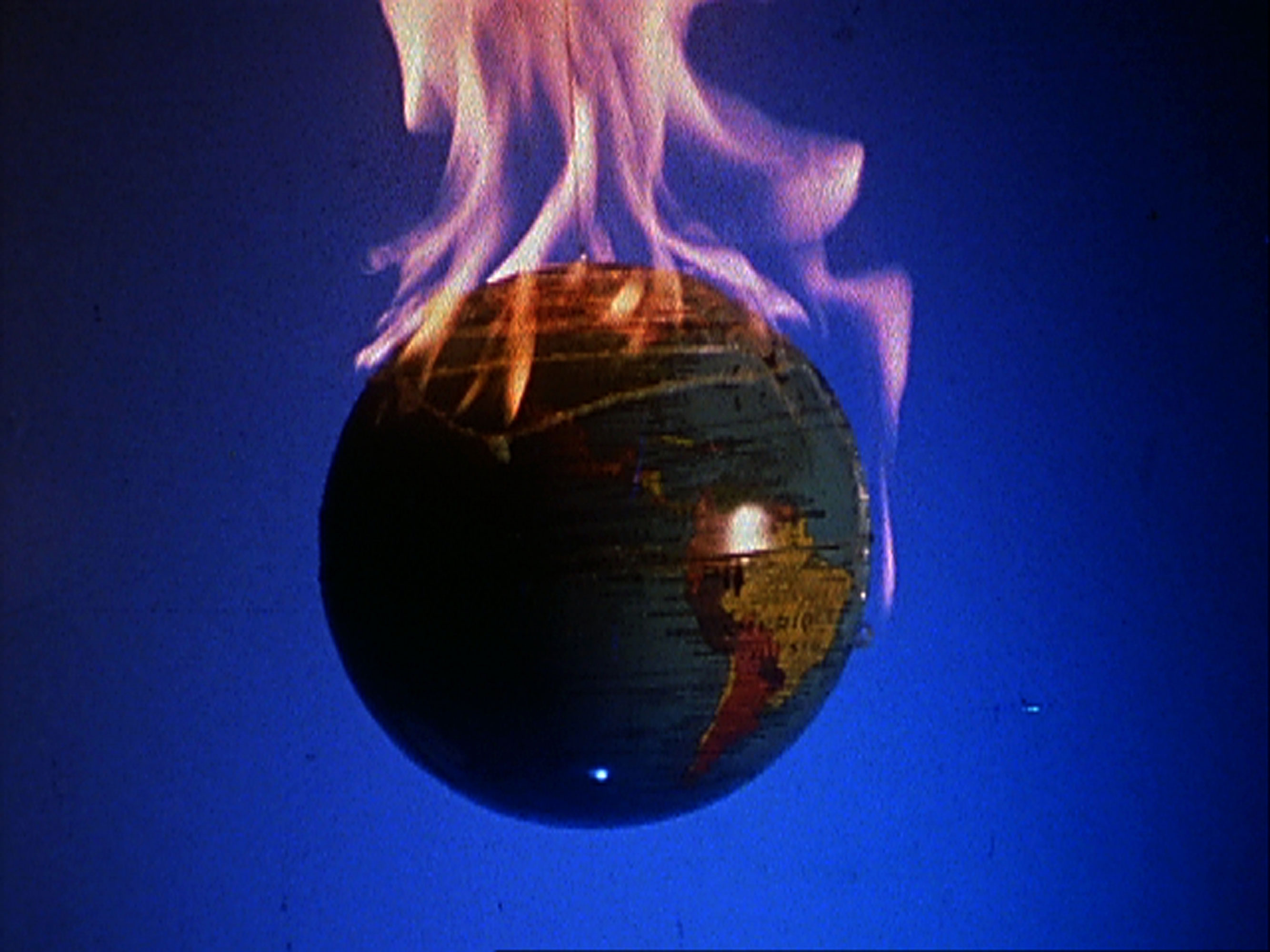 Artist and AIDS activist David Wojnarowicz (pronounced voy-nah-ROH-vitch) often was elusive about his biography, and friends claimed he frequently self-mythologized. However, it largely is agreed that he was born in Red Bank, New Jersey, in 1954, the youngest of three siblings. He had a rough childhood. Wojnarowicz’s alcoholic father abused his wife and children, and his parents divorced when he was only two years old. Wojnarowicz then lived mostly with his mother in New York City. As a child, he attended Roman Catholic grade school, an experience that both ingrained religious imagery within him and led him to assail religious leaders and teachings in his artwork later in life.

In 1978, at the age of sixteen and after dropping out of the High School of Music and Art in Manhattan, Wojnarowicz settled in the East Village and supported himself as a hustler. He also gained attention as a graffiti artist who drew stenciled images of burning houses on the sides of buildings in his neighborhood. Wojnarowicz taught himself collage, drawing, painting, video, and photography and worked easily across these various media. His symbol-laden art often overlaps text and paint, includes collage elements and photographs, and is inspired by Surrealism, comic strips, science fiction, and mass advertising.

Wojnarowicz’s art also carries the traditions of “sexual outlaws,” such as William Burroughs, John Rechy, Jean Genet, and Arthur Rimbaud. For instance, Wojnarowicz gained notoriety in the late 1970s and early 1980s for murals he produced in the dilapidated Hudson River Piers, a place where gay men met for anonymous sex. He also executed a series of photographs that tell stories of a fictive Rimbaud. Arthur Rimbaud in New York (1978–79) features Wojnarowicz’s friend Brian Butterick wearing a mask with the face of the poet. He is photographed in various locations throughout the city that Wojnarowicz frequented—on the subway, in a diner, and at Coney Island, the Hudson River Piers, and the red-light district in Times Square. While the series chronicles the artist’s own life and relates it to that of the accursed poet, it also represents queer visibility in contemporary art and documents histories of outsiders that otherwise would be forgotten or unseen.

Wojnarowicz often explored themes of violence, capitalism, and social injustice in his artwork as well, particularly in the mid- to late 1980s, when he began making his signature collages. Made from elements such as maps and supermarket posters, the works feature seemingly incongruous imagery that nonetheless speak to social and political oppression. Slam Click (1983) is a striking, colorful work that shows a drawing of a man sitting up in bed with a screaming face floating over him. The man looks sideways at prison bars that enclose him in a cell. The theme of confinement is reiterated by the placement of this image inside a larger one—a bright green “At Service Deli” menu. Bold black print advertising cheese, bologna, and rice pudding surrounds the nightmarish scene. Wojnarowicz often depicted scenes of terror, violence, and sexuality within those of mundane concerns in these collages that raise the question of who or what is being served or consumed by our social structures.

AIDS and homosexuality became increasingly important in Wojnarowicz’s work when his partner, the photographer Peter Hujar, was diagnosed as HIV positive in 1984. Hujar died in 1987 and Wojnarowicz received his own diagnosis of AIDS the following year. Wojnarowicz would use his art to convey his anger toward political leaders and their slow response to the AIDS epidemic as victims died of neglect and ignorance. Subspecies Helms Senatorius (1990) reflects this rage. The Cibachrome image shows arch-conservative Senator Jesse Helms’s smiling face superimposed on the head of arachnid with a Nazi symbol emblazoned on its back.

Wojnarowicz also famously took legal recourse in 1989. Donald Wildmon, founder of the American Family Association, mailed anti-gay pamphlets to all members of Congress, media outlets, and religious leaders across the country with reproductions of portions of Wojnarowicz’s work that he considered pornographic and blasphemous. Specifically, Wildmon objected to a detail of the lithograph Untitled (Genet) (1990), which shows a tormented Jesus with a heroin syringe in his arm. As a Roman Catholic, Wojnarowicz had been taught that Jesus took on the sufferings of all people in the world. He recounted, “I wanted to make a symbol that would show that he would take on the suffering of the vast amounts of addiction that I saw on the streets. And I did this because I saw very little treatment available for people who had this illness.” Therefore, as Wildmon took an excerpt of Wojnarowicz’s work and presented it out of context, Wojnarowicz sued him for misrepresentation and won the case.

Wojnarowicz also captures the passion and intensity of his views in A Fire in My Belly (1986–87), a visceral meditation on death, power, violence, religion, and sexuality. On a trip to Mexico, Wojnarowicz shot twenty-five rolls of super-8 film documenting scenes that embodied the chaos and spectacle of city life. He then used the footage to produce a rough montage that he intercut with staged studio shots.  However, A Fire in My Belly was never completed. What currently circulates and Landmarks presents is a 13-minute version entitled A Fire in my Belly, A Work in Progress and a 7-minute excerpt that possibly represents a chapter planned for the finished version.

In both cases, Wojnarowicz fills the video with disquieting scenes and symbols. He juxtaposes beggars, armed police, slaughtered animals, and newspaper headlines reporting murders. He shows the fighting of wrestlers, bulls, and cocks with falling coins, burning globes, and spinning eyeballs. Many of A Fire’s striking images also reflect the ongoing concerns of Wojnarowicz, as they would reappear in later works. The ants crawling over images are the subjects of photographs in Ant Series from 1998. A Fire also features two loaves of bread stitched together, as shown in Untitled (Bread Sculpture) (1988–89), as well as his own lips sewn shut in his iconic self-portrait Silence = Death (1989).

Together the images express Wojnarowicz’s anger and complex feelings toward the Catholic Church and other structures of power and control. Moreover, the formal composition of the film itself—the camera movement and fast-paced flashes of imagery—reflect the speed and aggression of modern life. The effect of the quick jump cuts also suggests a lack of comprehension and compassion in society for the many instances of destruction and oppression that Wojnarowicz captures.

Nonetheless, these thematic concerns were ignored by the president of the Catholic League, Bill Donohue, Speaker of the House John Boehner, and other members of Congress in 2010, almost a quarter century after the making of the film. Again, a detail of Wojnarowicz’s larger work was used by the group in a political attack. Specifically, they opposed a segment showing ants crawling over a crucifix. The group called on the National Portrait Gallery to take the video down from view in the exhibition Hide/Seek: Difference and Desire in American Portraiture. On December 1, 2010, the gallery did so to the ire of many museum professionals, who then held screenings of the work at their own institutions in response. For better or worse, however, the incident reflected the continued impact and relevancy of Wojnarowicz’s art, as arts institutions carried on his legacy and waged the cultural wars he helped begin. –Kanitra Fletcher