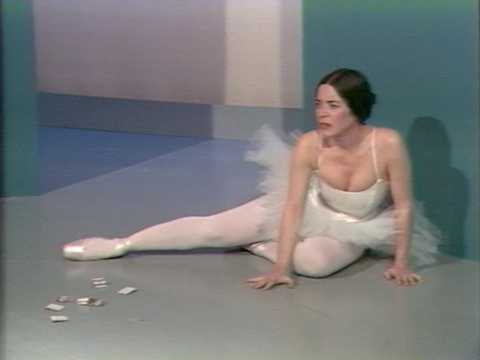 Born Eleanor Fineman in Bronx, New York, in 1935, Eleanor Antin has had one of the most illustrious careers in contemporary art. Since graduating from City College in 1958, she has received numerous awards, including a Guggenheim Foundation Fellowship in 1997. She is Emeritus Professor of Visual Arts at the University of California at San Diego, where she has taught since 1975, and her work has been exhibited and collected by institutions that include the Museum of Modern Art, the Whitney Museum of American Art, Queens Museum, and New Museum in New York.

Antin began as a painter, but also studied acting and philosophy. She works in a range of media that includes photography, video, film, installation, performance, drawing, and writing. In the 1960s, she began to focus her practice on conceptual art. 100 Boots, which was presented at the Museum of Modern Art in 1973, is perhaps Antin’s best-known conceptual work. For the project, she photographed 100 rubber gumboots in various locations to create 51 postcards that she mailed to more than 1,000 recipients in Japan, Europe, and the United States from 1971 to 1973. The images record the journey of the boots from the Pacific Ocean to New York City through mail art that consequently bypassed the traditional gallery system.

In her landmark performance work of 1972, Carving: A Traditional Sculpture, Antin photographed her naked body from the front, back, and sides in 148 black-and-white images that document a 37-day crash diet. Presenting Antin’s own body and personal experience in a stark, monochromatic grid format, Carving serves as a feminist, postmodern take on the male-dominated minimalist movement as well as the reign of painting and sculpture in the hierarchy of fine art. The piece also addresses what has been the main concern of Antin’s career: issues of identity and the role of women in society. As a Jewish woman, Antin is intimately aware of race and gender-based (stereo)typification, which she alludes to in the surveillance and serial documentation of her figure. Further, her view of weight loss as the “carving” of one’s body highlights the repeated, painstaking, and (literally) dehumanizing processes to which women subject themselves for social acceptance.

Antin later stated, “It has been part of woman’s glamour as an artistic subject that she was seen as pathetic, passive, in short—the superb victim…. I was determined to present women without pathos or helplessness…. My selves (including my absurd male self) had all chosen life styles independent of men’s.” Thus, in the 1970s and ‘80s, she created several videos in which she played invented personae that dealt with sociopolitical issues. She played The King, The Ballerina, and Eleanor Nightingale, a character that is a combination of Florence Nightingale and the artist herself. However, her most famous persona is Eleanora Antinova, the tragically neglected black ballerina of Sergei Diaghilev’s Ballets Russes. As Antinova, Antin transgressed racial boundaries, for better or worse, to detail the life of her invented character. Her personification, which continued for more than a decade, resulted in a range of works, including a fictitious memoir and numerous films, drawings, photographs, installations, and performances.

More recently, Antin completed two large-scale photographic series inspired by Roman history and mythology— The Last Days of Pompeii (2002) and Roman Allegories (2005). The works are ironic commentaries on the conspicuous consumption of modern-day Americans. For the former, Antin staged the end of Pompeii in the wealthy seaside community of La Jolla, California. In one scene, the citizens of Pompeii/La Jolla drown in the excess of their own wealth. Countless gold and silver coins cover their bodies to suggest a link between the rise of Roman and U.S. imperialism and their subsequent falls, both of which entail the persistent threat of natural, environmental disaster.

In her 1975 video The Little Match Girl Ballet, Antin dons a tutu to adopt the role of her “Ballerina Self,” who dreams of conquering New York to finally make it big as a famous ballerina. Desperate to be discovered by George Balanchine, she recounts her strategy for success to a silent, seated audience, then acts all the parts of an imagined ballet with music by Stravinsky and sets by Picasso. However, despite all the exuberance of her presentation, the ballerina never actually dances, and, like the hallucinations of the original Little Match Girl as well as contemporary celebrity culture, her stories waver between reality and fantasy. Antin thereby alludes to the social and psychological pressures of modern-day women in the guise of an extreme female archetype. Thus, as shown through the many invented roles that Antin has adopted and historical periods she has appropriated throughout her career, the suspension of disbelief allows us to see the underlying desires and tensions of our circumstances more clearly. —Kanitra Fletcher