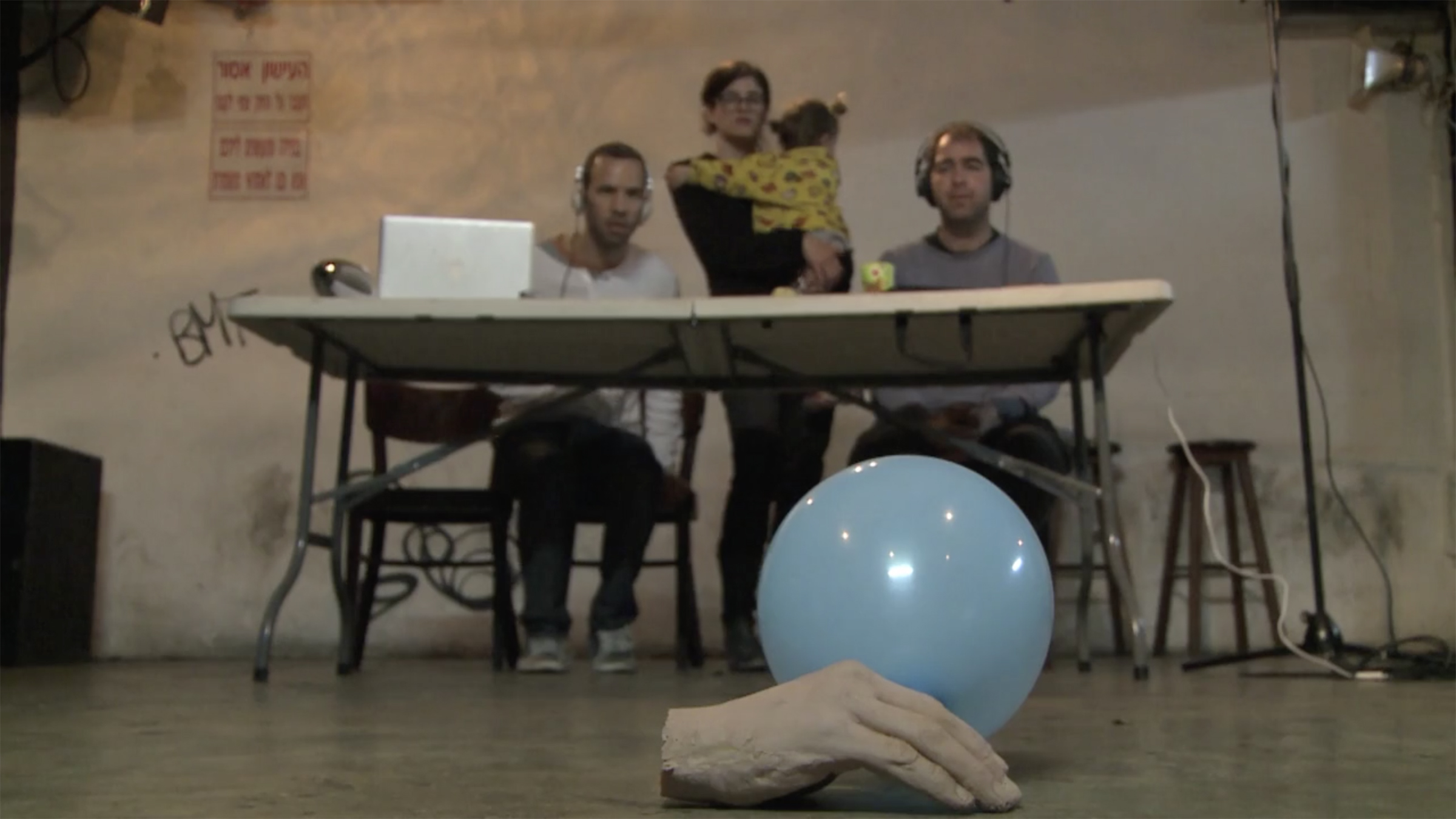 The tensions between solitude, family obligations, and artistic freedom run through the oeuvre of Guy Ben-Ner. In much of his work, he has adapted frameworks of classic literature to scenarios in domestic settings that involve his family. These low-tech collaborations suggest there is little that separates art and life, fact and fiction, or private and public.

Born in Ramat Gan, Israel, in 1969, Ben-Ner attended Thelma Yellin High School of the Arts, where he focused on painting to the detriment of his other subjects. However, he eventually became bored with the medium and began experimenting with video. For Ben-Ner, “video…connected [him] to day-to-day life…. It was very liberating.”

He then attended the Hamidrasha School of Art at Beit Berl College, earning his B.Ed. in 1997, and Columbia University in New York, where he earned an MFA in 2003. Soon after, Ben-Ner had solo shows at MassMoca, Muse de Art Carrillo Gill, Museum of Contemporary Art Montreal, Contemporary Art Center Cincinnati, and the Israeli Pavilion of the 2005 Venice Biennale. His work also has been included in group shows at MCA Chicago, San Francisco Museum of Modern Art, ICA Philadelphia, Tate Modern, MoMA PS1, Performa 09, and Contemporary Arts Museum Houston.

At the start of his career, Ben-Ner framed his videos with the narratives of major works of literature, books that are well known and embedded in our culture. He sees these “stories as narratives that we know without having to read them. These narratives are kind of imposed on you and, in a way, you measure your life through them.” They therefore adapt well to his works that center on the home and feature his family as players. Berkeley’s Island (1999) was inspired by Robinson Crusoe and features Ben-Ner in vignettes about life as a castaway, stranded on a pile of sand in the middle of his kitchen. The silent video Moby Dick (2000) presents the artist and his six-year-old daughter play-acting in their kitchen. Ben-Ner turned the space into a whaling ship and used camera tricks and slapstick routines of classic cinema to recreate highlights from Melville's classic tale.

In Stealing Beauty (2007), Ben-Ner moved the drama out of his own home and into an alternate domestic setting—the IKEA showroom. Filmed (without permission) in stores around the globe, the video shows Ben-Ner and his family lounging and acting out scripted and improvised scenarios in various showrooms as if they were home. Shoppers perusing the items wander in and out of the scenes, which end when security guards arrive. At times, Ben-Ner also riffs on Marxist theory. These ideas expressed in such a setting call attention to the ways in which family values relate to consumerism and capitalist notions of the home.

Foreign Names (2012) comments on consumerist aspects of everyday life that might go unnoticed as well. Ben-Ner responded to how microphones have replaced waiters in an attempt to save money and be more efficient. In nearly one hundred Aroma coffee shops (an Israeli chain) Ben-Ner ordered coffee and left fake names and phrases in English to be called out at counters when the beverages were ready for pickup. Thus, numerous baristas narrate the script of the video. Edited together, they ironically and unassumingly recite an ode mourning the loss of waiters, in which they themselves are complicit.

In Drop the Monkey (2009) Ben-Ner returned to his personal relationships. At the time, he was going through a divorce with his soon-to-be ex-wife in Israel and struggling in a new relationship with his girlfriend in Berlin. The video features him seemingly having a phone conversation with himself between the two cities. Made shot-by-shot, without editing or rehearsals during twenty-four trips over a year, the video records his life, but also alters it in important ways. Ben-Ner explained, “You want to document life and by the very fact of being with a camera and shooting a film, you change life. In the film, my girlfriend leaves me because I am making a movie about our relationship. Fiction enters life and instead of documenting life, it changes it. That whole mix happened in real life.”

Likewise, Soundtrack not only portrays but also played a pivotal role in his family dynamic. After his divorce, Ben-Ner had stopped making films with his children. He knew he needed to make another video with his now teenage children, as well as his youngest child from his current relationship, to move past this barrier and resume their creative relationship. For their next collaboration, the artist, his three children, and friends reenacted eleven minutes of Steven Spielberg's 2005 sci-fi film War of the Worlds (based on H.G. Wells's 1896 novel) in his apartment in Tel Aviv.

Although the movie is about an alien invasion, most of the drama in Soundtrack takes place in the kitchen. In tight quarters, Ben-Ner created imagery of appliances that malfunction and combust as dishes fall and shatter to match the sound effects, a reverse-Foley process he calls "budding," the opposite of dubbing. The actors therefore reenact the unseen scenes and sounds that are attributed to household items and activities. For instance, rain is seen as a frying egg and robots are a blender. Because Spielberg’s version is an action film, replete with screams and explosions, mundane actions, such as blending a smoothie, catching a falling bottle, or swatting a fly, carry weight and have catastrophic consequences in Soundtrack. Yet, they are portrayed in a slapstick manner, as Ben-Ner's youngest plays and laughs in the midst of the chaos.

The kitchen setting also is significant as it is where conflicts between family members often take place. And, despite the absurdity of the action, in a sense, Ben Ner’s family is at war too. Ben-Ner stated, "One of the reasons I chose the Spielberg story is that through it we could exteriorize or conceptualize the dramas we ourselves experienced.” The movie stars Tom Cruise as a divorced, dysfunctional father forced to spend the weekend with his irritable kids. Likewise, Ben-Ner’s two older kids visit him in the film and in real life to work through familial difficulties.

Ben-Ner also explained, "I wanted...to see the family as a reflection of the outside world," and several times we see video footage of Israeli conflicts running on a laptop. As Ben-Ner’s apartment nearly is destroyed, images of people running in the streets from attacks on Gaza remind viewers that a real war is happening nearby. Lines from the film—"Are we under attack?" and "Is it terrorists?"—therefore take on more profound meaning than originally intended. These obvious associations to the realities of Ben-Ner's surroundings demonstrate how war is not just a metaphor or a faraway event. It is a real situation with deadly consequences happening in and near families’ homes. By embedding this footage within the chaos of Soundtrack, Ben-Ner once again not only transgresses borders between comedy and tragedy but also creates a deft dialogue between reality and fantasy. –Kanitra Fletcher