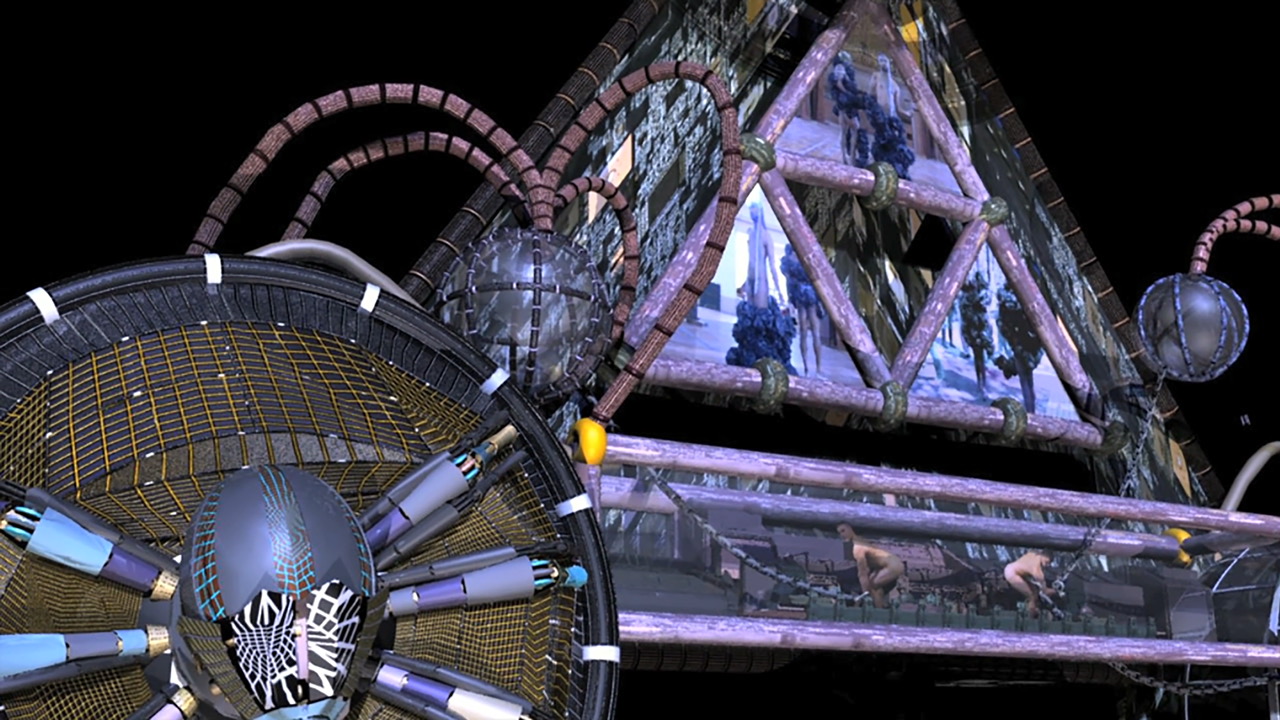 With a practice that builds fantastical digital worlds and spacescapes, South Carolina–born, New York–based artist Jacolby Satterwhite (b. 1986) continually destabilizes conventional notions of home and the domestic realm. Drawing from video games, art history, African rituals, music videos, and queer theory, his animations are stunning creations that mine his personal history for an imagined collective future.

Satterwhite’s mother, Patricia, colors much of the artist’s past and figures in his artmaking. Diagnosed with schizophrenia, Ms. Satterwhite (d. 2016) would spend much of her time at home developing and drawing domestic objects of mysterious purposes that she envisioned being sold on home shopping networks. A prolific artist in her own right, she also penned and performed songs inspired by gospel and folk music, which are preserved in recordings retained by the artist. Satterwhite incorporates his mother’s art into his own practice, creating ethereal trip hop-esque beats overlayed with her vocals to serve as soundtracks to his videos. Her inventions are also rendered three-dimensional, then displayed in immersive installations and in Satterwhite’s mythic universes onscreen.

The enigmatic presence of Ms. Satterwhite’s products and performance, unmoored by any specified meanings, complements Satterwhite’s chosen medium. Trained as a painter, he earned his BFA at Maryland Institute College for Art and his MFA at the University of Pennsylvania. After experimenting with computer processes while in residence at Skowhegan School of Art, Satterwhite turned to new media, specifically 3D animation, as his primary form of expression. Much like the feminist artists in the 1970s who gravitated to photography and video, Satterwhite found new media unburdened by the weight of white, Eurocentric art history associated with painting. It allows a certain freedom for a queer Black body, such as his, to occupy space without conceptual baggage attached to it.

Accordingly, Healing in My House (2016) features scenes of Satterwhite engaged in movements that recall vogueing, capoeira, and martial arts. He performs these actions alone in an abandoned club or cloned as multiple figures that dance throughout sweeping views of digital interiors. These scenes are juxtaposed with exterior images of floating spacecrafts surrounded by men at work. The men are nude or in leather fetish wear and engaged in obscure, repetitive mechanized motions, often while attached to giant chains. Further afield are whirling landmasses with a feminine cyborg figure orbiting overhead as she zaps monuments and rock formations, causing them to crumble.

In contrast to such chaos, within the floating spaces that Satterwhite and his clones inhabit, bodies perform in unison, projecting senses of community and collectivity. They are connected throughout a space that is elastic and expansive, allowing for unfettered physicality disassociated from constrictive meaning. This sense of freeness appears as a therapeutic corrective to historical delimiting notions of blackness, queerness, and masculinity. As Patricia Satterwhite’s accompanying vocals remind us, there is indeed healing in this house. –Kanitra Fletcher