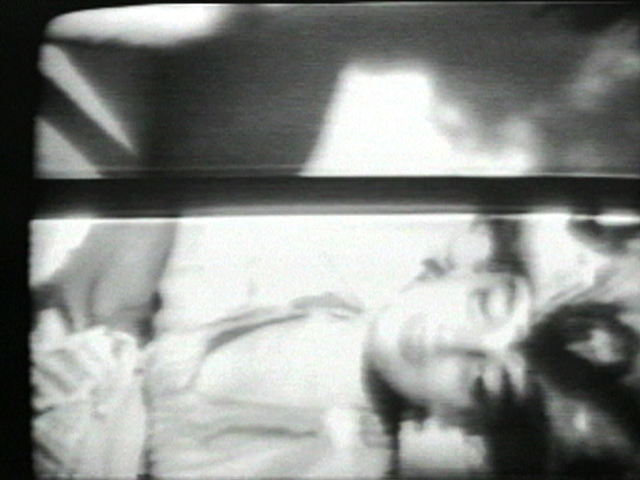 Like a number of pioneering video artists, Joan Jonas began making videotapes in the early 1970s when new video camera technology made recording and playing footage relatively easy and affordable. Jonas’s work from this period exploits the technological possibilities of the new medium and draws upon the artist’s familiarity with traditions of literature and theater as well as her engagement with a developing New York City avant-garde scene.

Born in 1936, Jonas studied art history and sculpture at Mount Holyoke College in Massachusetts (BA, 1958), at the School of the Museum of Fine Arts in Boston, and at Columbia University in New York (MFA, 1965). She developed her artistic “voice” in the 1960s and early 1970s, when many artists were no longer respecting strict boundaries between painting, sculpture, music, film, and other media and referencing various sources beyond the visual arts. She was drawn to the clarity of James Joyce and American Imagist poets and also to the labyrinthine magical realism of Jorge Luis Borges; she was influenced by the rich symbolism in centuries-old traditions of Japanese Noh and Kabuki theater and by the here-and-now in Happenings and dance performances at the Judson Church; she watched underground films by Jack Smith and others being screened at Anthology Film Archives. In 1968 Jonas made her first public performance on a beach (footage was later used for her first film, Wind). It featured costumed people using mirrored props in choreographed movements. Some of the themes in the performance were revisited throughout Jonas’s subsequent work: myth, ritual, drawing, the body, repetition, and the video camera as a device through which an artist can isolate and show a slice of a larger whole and connect with viewers.

Vertical Roll (1972) is the videotape for which Jonas is arguably best known. In it a maladjusted television monitor (the device upon which videotapes were shown at the time) is used to fragment footage that is twice mediated. What we see in this twenty-minute long, black-and-white tape has been captured by a video camera trained on a monitor whose rhythmic vertical roll interrupts the footage that is playing on it. Between black bars we catch glimpses of the woman whom the first camera shot. She is sometimes clothed as Jonas’s quirky alter ego showgirl Organic Honey and sometimes naked; she is sometimes vertically aligned and is sometimes seen horizontal; she is occasionally whole but usually just a pattern of moving arms, legs, or torso. While the incessant vertical roll creates visual order out of the bodily discord, a recurring aural beat—perhaps a metal spoon smacking a surface close to the camera—further converts the subject’s everyday movements into an impersonal ritual and creates distance between the performer and the viewer. This distance collapses in the tape’s final minute when Jonas’s whole face comes out in front of the still-stuttering monitor and slowly turns to stare out at the viewer. The gesture is satisfying and provocative—finally our gaze meets Jonas’s. The artist’s piercing eyes in these final moments confront the camera’s objectification of the (female) body and throw into relief video’s ability to create enough space between viewer and performer so that the personal becomes universal. —Kate Green