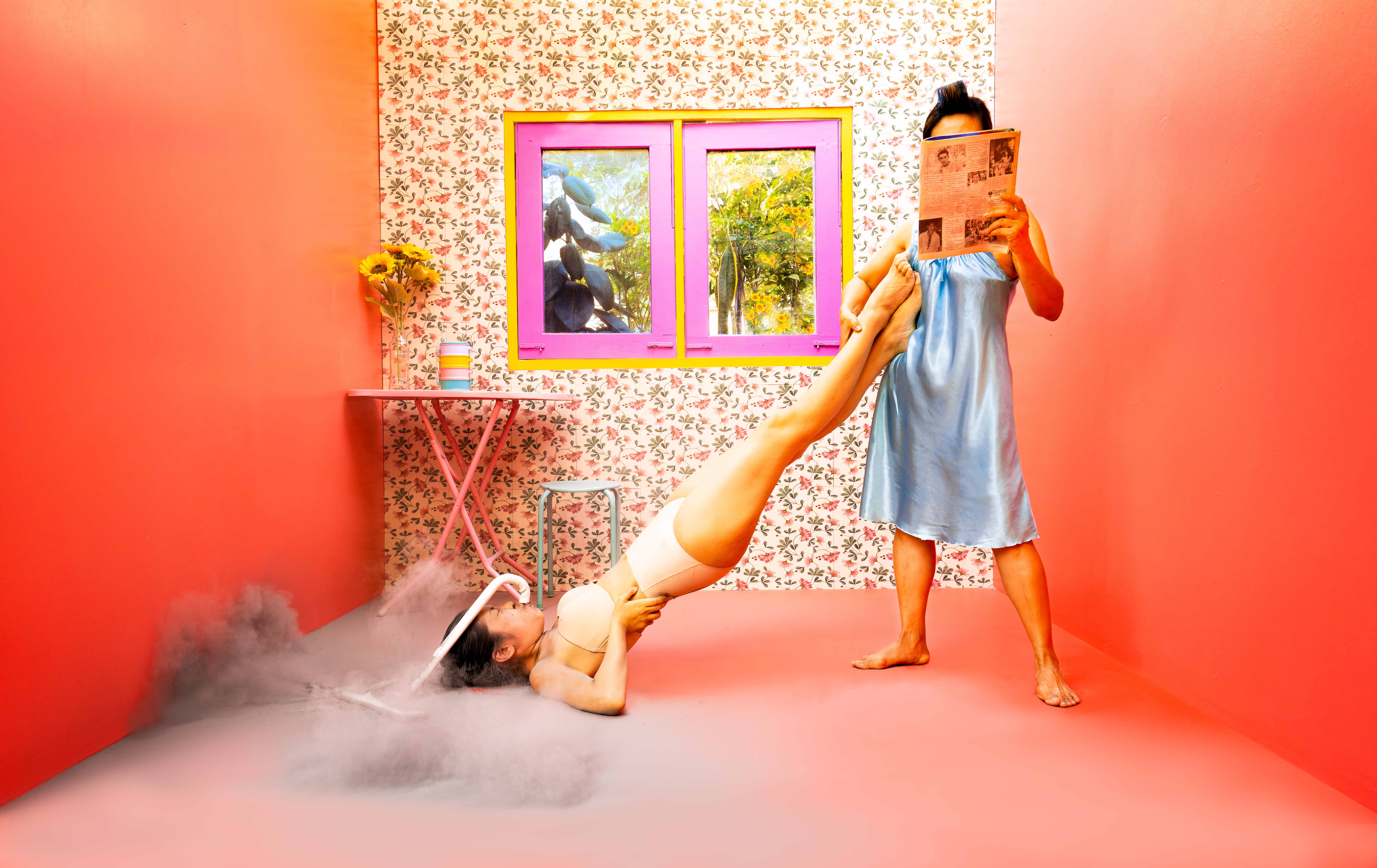 “In Thailand, my personal values were re-constructed by society’s perception of what women ‘should be’ and how they ‘shall behave.’ I learnt that my opinions and expressions were viewed as stubborn and rebellious. It was a truly exhausting period growing again as an accepted woman in Thailand.” Artist Kawita Vatanajyankur’s piercing observation of gender roles in southeast Asia could apply to the experiences of women in countless locations across the world. It also informs her sharp-witted artistic practice, resulting in work that is relatable across racial, ethnic, and national boundaries.

The Bangkok-based artist has been celebrated for her performances in Tools, a video series that addresses the historically underacknowledged and underappreciated labor of women. Against vibrant blue, pink, yellow, and green backgrounds, Vatanajyankur transforms her body into various domestic tools, as indicated by the titles of the videos, and imitates the tasks they complete. In Sponge, she becomes a sponge, repeatedly immersing her head into a bowl of soapy water and rubbing it back and forth across a plate. In Dustpan, her head is a broom, slung into a dustpan over and over again. And in Vacuum, she is held upside down by another woman as she sucks in floor dust through a tube inserted in her mouth.

Vatanajyankur creates tension between her arduous acts and their seductive staging. She draws inspiration from the bold imagery and bright coloring of commercial advertising used to lure viewers into contrived scenarios of pleasurable housecleaning. However, her videos upset those projections of domestic bliss, as the imagery also speaks to the grueling repetition of women’s labor. At times, the performances become difficult to watch and inspire worry or concern for the artist as her face pushes a block of ice back and forth in Ice Shaver or her head butts up against the hard, unforgiving edges of a porcelain bowl in Toilet. Rather than playful or even meditative, these acts of endurance appear painful and violent as they test the limits of Vatanajyankur’s body.

Through her performances of physically demanding acts in which she precariously bumps, hurls, and balances her body, Vatanajyankur demonstrates the remarkable resilience of women who endure daily subjection to housework. As demonstrated in the videos, women’s domestic labor is repetitive, time-consuming, and exhausting. The performances also suggest that this necessary labor goes uncelebrated and largely unacknowledged by the societies from which it benefits. Likewise, Vatanajyankur does not address the camera and at times becomes unidentifiable. Her face might be covered in soap or obscured by the speed and turns of its motion. Her body, folded on its side on the floor or submerged in water, might figure as a lifeless lump of cloth. In these ways, Vatanajyankur examines how the female body, rather than being appreciated, has become inextricably tied to domestic objects and housework in the social consciousness.

Nonetheless, as painful as the imagery and subject matter of Tools are, Vatanakyankur’s bravery of objectifying and subjecting herself to the danger of these acts speaks to the fortitude of women whose work she salutes in her own. As the artist states, “Housework, even though it is usually seen as an abstract work, it is never ending and usually physically and psychologically exhausting. Often seen as female’s underappreciated work, it, in fact requires strength, power, and endurance.” —Kanitra Fletcher