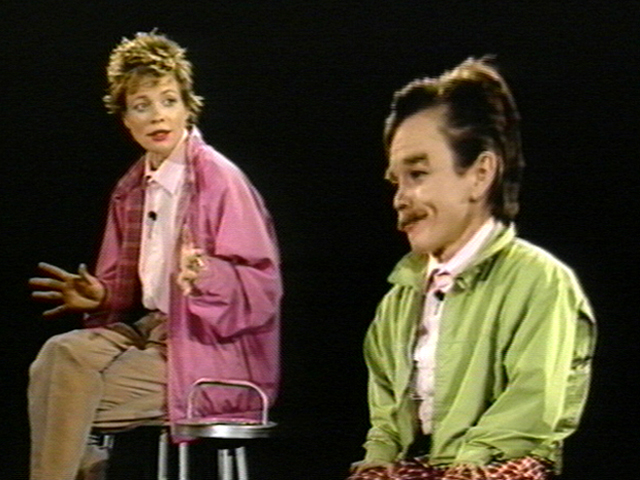 Known to a wide range of audiences, multimedia performer Laurie Anderson has been classified as a visual artist, composer, poet, filmmaker, vocalist, ventriloquist, choreographer, and musician. She develops quirky, non-narrative stories that use technology and sound to explore the role that culture plays in the life of the individual. Anderson has undertaken diverse projects that include a video about alter egos, an album with a pop hit, a documentary about the way that appearances shape perceptions, a stint as an artist-in-residence at NASA, an opera about the United States, a traveling show based on Moby Dick, and a book of drawings about dreams.

Born near Chicago, Anderson studied at Mills College before earning a BA in art history from Barnard College in 1969 and an MFA in sculpture from Columbia University in 1972. At that time she was involved in New York City’s experimental downtown art scene, presenting performance-based works that defied easy categorization. In Duets on Ice, first performed in New York in 1972 and shortly thereafter in Italy, Anderson stood on a street corner wearing ice skates frozen into a block of ice and played a violin embedded with a speaker emitting a tune. The result was a duet that ended when the ice melted.

In the 1980s, Anderson garnered attention for her albums and traveling shows. Big Science (1982), her debut record, featured the hit single “O Superman.” It was post-punk, proto-techno, and full of electronic sounds and non-sequiturs. The related eight-hour “talking opera” United States (1983) used electronics to describe an America obsessed with innovation. Divided into sections about transportation, politics, money, and love, it featured slides, film clips, and holograms alongside performers and synthesized sounds that referenced the radio, outer space, airports, and other arenas where technology and American aspirations intersect.

While Anderson may be best known for large-scale projects, she has also produced smaller-scale pieces more suited to museum settings. In such works, video and film enable the artist to perform in absentia—with less spectacle and more intimacy. In a 1975 installation titled At the Shrink’s, she represented the multiple layers of her psyche by projecting Super-8 footage of her own body onto a figure molded into the shape of the projection. The eight-inch mini-Anderson—at once tangible and illusory—described sessions with an analyst and hinted at the impossibility of a solid and fixed identity. Anderson’s video What You Mean We? (1986) also uses technology to explore the idea of a fragmented self. In the video, she plays a celebrity artist who clones herself and charges her double with making the art for which she no longer has time. The clone—a smaller, male version of Anderson—pitches ideas from a desk cluttered with, among other things, a metronome, an ant farm, a snow globe, and an oversized telephone. As Anderson sits nearby reading a newspaper, he composes lyrics for an unfinished song about Hansel and Gretel and dreams up a movie that begins with a chef singing at an all-night diner and becomes about a crooning duo on a road trip. The absurd sequence ends with Anderson’s disgruntled clone creating his own double to help as he pursues a career as a celebrity artist, thereby perpetuating the cycle. What You Mean We? is quintessential Anderson: it employs performance, sound, technology, humor, and storytelling to critique the necessity of cultivating multiple personas in order to succeed in the art world. —Kate Green