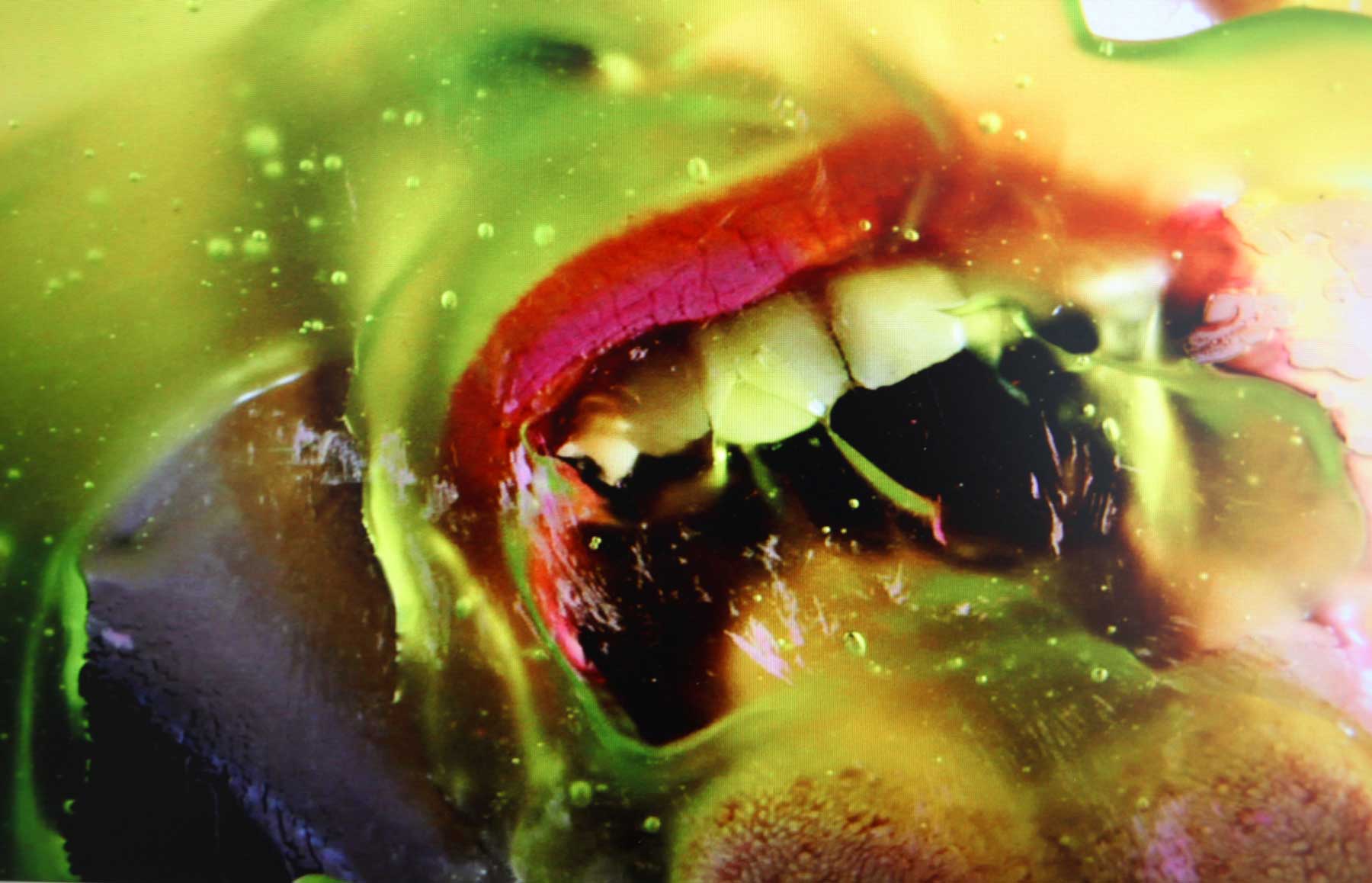 Marilyn Minter is invested “in the moment when everything goes wrong.... It’s when the model sweats. There’s lipstick on the teeth and the makeup’s running.” The large, vibrant photographs and hyper-realistic paintings on glossy enamel surfaces, for which she is best known, present fragmented close-up views of women’s bodies to interrogate conceptions of and desires for beauty and glamour. Alongside designer stiletto heels, luminous beads and gemstones, and glaring maquillage, Minter shows armpit stubble, beads of sweat, soiled feet, and bloodshot eyes, among other supposed flaws. In so doing, her work raises questions about society’s preoccupation with the so-called imperfections or perfection of women’s bodies. Minter presents real, unruly bodies that do not adhere to cultural guidelines for ideal (and impossible) feminine beauty; nonetheless, her lush, luminescent style of depiction makes her images all the more pleasurable to behold.

Born in Shreveport, Louisiana, in 1948 and raised in South Florida, Minter always has been inspired by the rituals, symbols, and trappings of gender as represented in popular culture. In fact, she taught herself to draw by tracing princesses and the comic-strip heroine Brenda Starr. In 1970, Minter earned her BFA from University of Florida, Gainesville, and she received an MFA in painting from Syracuse University in 1972. She has been the recipient of several awards throughout her career, including a National Endowment for the Arts Grant in 1989 and a Guggenheim Fellowship in 1998. Minter currently lives and works in New York City, where she also teaches in the MFA department at the School of Visual Arts.

While a student in Florida, in 1969, Minter took several photographs of her mother titled Coral Ridge Tower Series. The eerie, black-and-white images show a bedridden woman suffering from drug addiction, but in full makeup. At times, she is seen freshening her lipstick and dyeing her eyebrows, determined to keep up appearances at all times. Although Diane Arbus liked the work, Minter’s classmates were horrified; thus, she left the negatives unprinted for the following three decades. Nonetheless, the series exemplified Minter’s interests in clinging to, and falling short of, Hollywood beauty standards.

By the mid- to late 2000s, Minter regained popularity as she focused on images that she has termed “the feminine grotesque.” Although they initially look like fashion spreads for shoes, jewelry, and cosmetics (compositions Minter actually has made for the likes of Jimmy Choo and Tom Ford), the images of bejeweled accessories and bedazzled body parts are shown at uncomfortable ranges, close enough for the viewer to see the reality underneath makeup-laden lips, eyes, and toes and evoke the desire, or rather desperation, for glamour.

Crystal Swallow (2006), a 96 x 60-inch painting, presents an extreme close up of a heavily painted red female mouth surrounded by sweaty, glitter-coated skin, which seems to have ingested a chain of gleaming crystal beads. Similarly, the photograph Satiated (2003) shows a luscious set of fire-engine-red lips framed by sweat and freckles and stuffed with a string of pearls. The painting Blue Poles (2007) is a close-up view between eyes covered in turquoise shimmer eyeshadow that reveals a pimple, freckles, and errant eyebrow hairs. Finally, the paintings Strut (2004–05) and Dirty Heel (2008) both show a woman’s muddied foot balanced in a gem-encrusted high heel.

At once seductive and repulsive, Minter’s video Green Pink Caviar (2009) complements her still images and sets their themes into motion. Filmed beneath glass with macro lenses, the hallucinatory video shows an intensely close view of a model’s mouth pressed against the surface to lick, suck, and spit its way through various substances—lime green slime, hot pink goo, and gold and silver metallic food paints, sometimes mixed with cake and candy bead decorations. The lips, teeth, and tongue slowly rove and wriggle across the screen seeming to inhale and expel odd-colored fluids. At times, even the woman’s hair becomes entangled in the mess of the activity.

Although no sexual acts appear, Green Pink Caviar somehow borders on the pornographic. At the same time, Minter’s video speaks to the excesses of, and gluttonous desires encouraged by, industries of art, beauty, and fashion. As the mouth paints a sensual picture, its insatiability simultaneously results in a nauseating mess. Thus, the viewer ostensibly flinches while watching the video, going back and forth between wanting to look and wanting to turn away. Similar to the ambivalence one might feel when facing the advertising of unnatural, idealized bodies and the beautiful, unattainable accessories that adorn them, Green Pink Caviar pulls you in only to chew you up and spit you back out. —Kanitra Fletcher