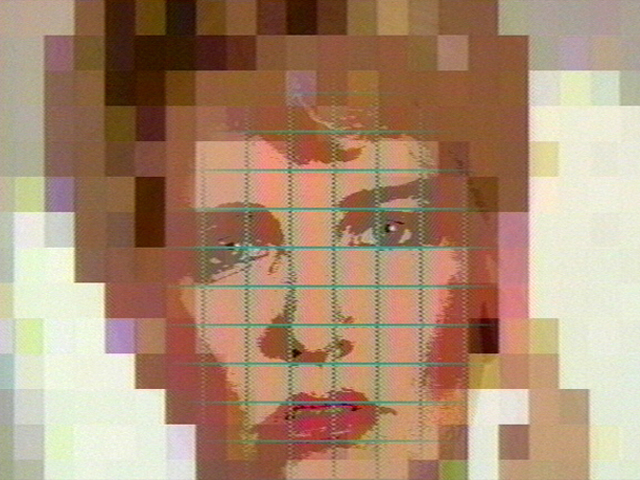 Throughout her career, video, digital media, and installation artist Max Almy has pushed the boundaries of art and technology. Influenced by the experimental theater and performance art scene in San Francisco, her first video installations in the 1970s grappled with contemporary problems of everyday life. By the 1980s, Almy was employing computer technologies to produce boldly stylized video narratives. These works turn advertising techniques and television technologies back onto themselves to comment on the values of our postmodern, consumer-based, and media-saturated culture.

Born in 1948 in Omaha, Nebraska, Almy received her BFA in 1970 from University of Nebraska and her MFA in 1978 from California College of Arts and Crafts in Oakland. Almy’s work has been exhibited at major museums throughout the world, such as Museum of Modern Art, New York; Centre Georges Pompidou, Paris; Stedelijk Museum, Amsterdam; Whitney Museum of American Art, New York; San Francisco Museum of Modern Art; and Museum of Contemporary Art, Chicago. She has been awarded an NEA Visual Artists Fellowship, an AFI Independent Filmmaker’s grant, and production grants from Sony, Apple, and Philips.

In 1983, Almy produced Perfect Leader, a multi-award-winning and internationally exhibited short experimental video. Produced to coincide with the 1984 U.S. presidential campaign, Perfect Leader combines humor and horror to critique the creation, marketing, and selling of a president. Almy used the latest in newly emerging digital technology and a driving soundtrack to produce a political television spot in which a computer manufactures models for a candidate. The software offers up three political types—moderate, evangelist, and dictator—as symbols of power, war, and oppression populate the background and a woman intones, “We've got to have a perfect leader.” Like a perfectly packaged commercial by Madison Avenue or a video for MTV, Almy effectively and satirically presents a simulation of contemporary political media tactics.

Deadline (1981) is a multi-monitor and projected video installation in which an exhausted, running man is superimposed over the magnified disembodied red lips of a woman, who alternately coaxes, seduces, and orders him. She repeats, “Come on, you can do it…. Go a little further…. Keep pushing…. You've got to make it,” pushing the man to reach an abstract, unattainable goal. Almy used a range of digital video effects to stretch, compress, flip, and fracture the image of the man and visualize the stress and struggle of a contemporary consumerist society in which nothing is ever enough.

Utopia (1994) poses as an interactive video game exploring the social and environmental crises of the modern city. Performance artist Rachel Rosenthal acts as the host inviting the viewer to eliminate one word as a pair of terms flash on the screen: progress—decline, concern—neglect, security—fair, order—chaos, and so on. Ultimately, the score is always the same: the winner loses and vice-versa. Also addressing environmental issues is Museum of Disappearance, a haunting science exhibit within a fictional museum of the future. Using paintings, video projections, large graphics, and a sound score, Almy and her partner Teri Yarbrow created a display of artifacts of all the species that no longer exist.

Almy often collaborates with Yarbrow, a painter who works in a range of media, including video projections and site-specific installations. Together they produce complex works that combine video, painting, flat screens, digital imagery, video projection, and constructed surfaces. Recent pieces reflect the two artists’ interest in melding high technology with ancient universal forms to evoke processes of social, political, and spiritual rebirth and renewal. Almy and Yarbrow also have worked with major design and architectural firms to produce new media works for public spaces and entertainment projects, and they won the 1993 Emmy Award for Graphic Design for their work on the news program “Front Page.”

More recent works by Almy and Yarbrow are meditative multimedia pieces such as a series of Portals, which combine cut copper pieces with LCD screens and projections. Imagery and animation radiate through the center of the copper circles to produce an overlay of beautiful patterning that evokes the idea of light pushing through darkness. Similarly, Blue Tara and White Tara (2014) are meditative works that involve video projection, glass disks, and optical film, and are inspired by the figure of Tara, a bodhisattva of Tibetan Buddhism. Combining the ancient geometric form of the mandala with state-of-the-art nanotechnology, Amy and Yarbrow created dazzling, hypnotic displays of radiating lines, color, and light.

Rather than ancient figures and symbols, Leaving the 20th Century (1982) finds Almy concerned with possible futures. She used stylized visuals, ironic humor, and sophisticated technology of the time to create an experimental three-part video that depicts her vision of the end of the twentieth century and a fictional world of the future. In the first segment, “Countdown,” we first observe an unconscious man receiving his “daily input”—televised images and commentary—directly into his head. A woman’s voice reports on various topics—news, entertainment, leisure, fashion, finance, religion, art, and culture—gradually speeding up until it is indecipherable, suggesting the overloading of information into the man's brain. He then regains full consciousness.

The next segment, “Departure,” features a stylish woman chanting, “Be calm, relax, forget, and release. Resolve, prepare, release, depart” in various languages accompanied by Japanese subtitles. We then watch ghostly visions of a man and woman as a voice-over explains the reasons why they left the twentieth century, such as finding nothing good on television and being tired of waiting in line as well as growing up with no belief in the future.

Finally, after a time travel sequence, in “Arrival,” a woman appears with her image distorted in unnatural colors and her voice dramatically slowed down to a deep pitch. She explains that she has no idea where she is. The landscape has no details or points of reference, just horizons and light. She appears confused, and the scene ends with her repeating, “Please respond. I'm waiting for transmission.”

The woman seems lost without the seduction of media, television, and other spectacles, and, throughout the video, a sense of dehumanization pervades the narrative. Ultimately, Leaving the 20th Century serves a cautionary tale. People are lost, isolated, and never seem to connect with anything that is not digital, electronic, or computer-generated. Ironically, Almy manipulates media, computer graphics, and digital effects to show how we might arrive at a place and time in which human relations and communication fail, precisely because of the manipulative, mediating effects of technology. —Kanitra Fletcher