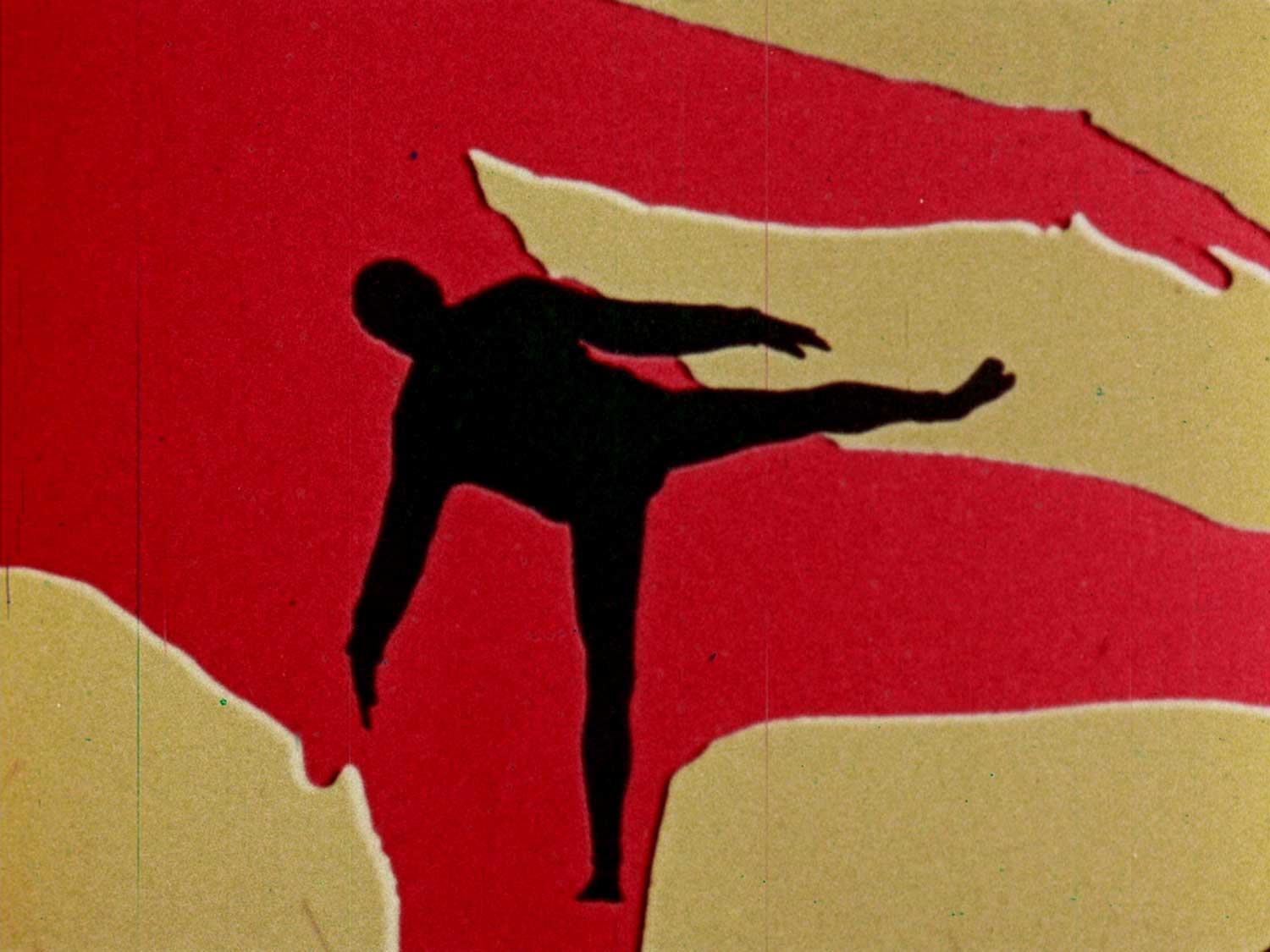 The striking, kaleidoscopic Assemblage (1968) is a recently rediscovered film by Richard Moore featuring choreographer Merce Cunningham and his early dance company. Produced as a dance for the camera—specifically to be shown on KQED public television—Assemblage largely figures as a public happening in San Francisco's Ghirardelli Square. The space around the square was the first of a new wave of gentrified urban environments where rundown markets or industrial sites were transformed into mall-like retail districts. Wearing pastel-colored outfits, the dancers frolic and scramble through the space’s promenades and concourses. Accompanying their various motions is a soundtrack by John Cage, David Tudor, and Gordon Mumma. It features sounds recorded in San Francisco and elsewhere, including insects, taxi radios, thunderstorms, and street performers. Moreover, the film includes stunning effects created by Moore and film editor Bill Yahraus—overlays, cross-fades, and split screens that were virtually unprecedented in the 1960s. Rediscovered after Cunningham's death in 2009 and transferred from 16mm and colorized by artist and filmmaker Charles Atlas, Assemblage is emblematic of the exploratory style and technique for which Cunningham was known.

Cunningham was born in Centralia, Washington in 1919 and began his professional career in modern dance at age twenty, when Martha Graham invited him to join her company as a soloist. He performed with Graham until 1945, and in the summer of 1953, as a teacher in residence at Black Mountain College, he formed the Merce Cunningham Dance Company. Artist Robert Rauschenberg became the stage manager and set designer for the company, and Cunningham’s life partner, John Cage, acted as the chief composer and musical advisor until his death in 1992.

Cage and Cunningham developed an innovative approach to their compositions by creating the music and choreography independently. Cunningham also danced to sounds—grunts, shrieks, squeals, and howls—that he produced with his own voice, and he abandoned many conventional elements of dance structure. As Cunningham archivist David Vaughan asserts, one will not come across “conflict and resolution, cause and effect, climax and anti-climax” in his dances, which use non-representational choreography. That is, the dance simply emphasizes movement and does not necessarily represent any idea, narrative, or emotional situation. The drama comes from the intensity of bodily motion and the human situation on stage.

Cunningham also liked to incorporate chance into his choreography, using dice and The I Ching to determine how a dancer should move or the sequence of performances. He also would splice together different elements from past compositions to create “Events,” or dance collages. His removal of solos, duets, décor, music, and costumes from their original contexts created entirely new meanings and experiences. Over the course of his career, he created more than 150 individual works and 800 Events.

Cunningham also experimented with numerous people from dance, music, theater, visual arts, and even the technical sciences. By 1995, he had developed a computer software program called Life Forms, which he used to choreograph dances. Earlier, in the 1960s and ‘70s, Cunningham had become interested in the ways film and video could extend his own experiments. Collaborating with filmmakers who included Atlas, Moore, Elliot Caplan, and Stan VanDerBeek, he explored filming dance as an art form, making the documentations of his performances works unto themselves.

Born in 1920 in Ohio, Moore became a member of the original circle of avant-garde poets known as the San Francisco Renaissance. He attended the University of California, Berkeley, but in 1939 was expelled for his participation in antiwar protests and his failure to complete courses for an entire semester. He moved to San Francisco, where he pursued his interest in modern dance. For several years Moore studied with May O'Donnell and José Limón. Eventually he moved back to Berkeley with his future wife, Eleanor McKinney, to begin a radio station devoted to the principles of nonviolence and pacifism. Moore also was granted readmission to the university where he eventually completed his bachelor’s degree.

Moore’s long career in public broadcasting began in 1949 when he cofounded KPFA-FM, the first station in what became the Pacifica Radio network. By 1954 he had moved on to television broadcasting at KQED in San Francisco. In 1961 he founded the station’s documentary unit and created more than a hundred films that include Assemblage. From the 1960s to the ‘80s, Moore combined an artistic and political agenda with cinema vérité techniques to produce films that explore racism, Duke Ellington, and the Cuban Revolution, among other subjects, for both KQED and his own production company, PTV Inc. In 1981 he joined the staff of KTCA in Minneapolis-Saint Paul as head of national programming. He was general manager by 1983 and retired in 1989 to northern California with his second wife, Ruth, and the objective of returning full time to poetry. Moore began to assemble poems from five decades, and with the help of poet Brenda Hillman, a selection of his poems, Writing the Silences, was published in 2010. A second volume of Moore’s poetry, Particulars of Place, was published posthumously, a week after his death, in April 2015. —Kanitra Fletcher