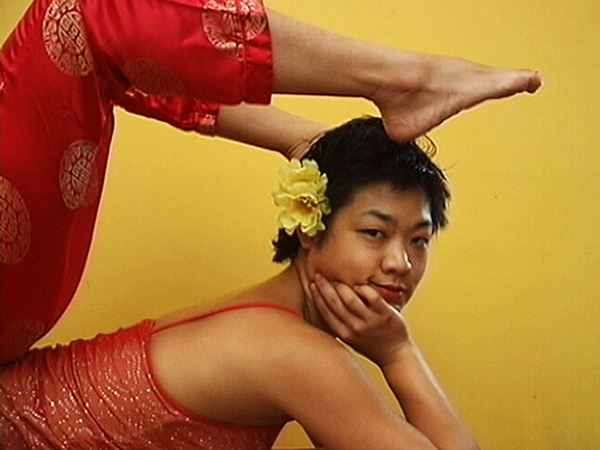 In disquieting yet pointed ways, Patty Chang (b. 1972, San Francisco, CA) has subverted gendered, sexual, and ethnic notions for more than fifteen years. In particular, she challenges social constructions and cultural imaginings of Asian and Asian American women and culture. Educated at the University of California, San Diego, where she received her bachelor of arts degree, Chang moved to New York in 1994 and soon gained the attention of critics and curators in the performance art scene. She became notorious for early pieces that test the limits of not only her audience’s levels of comfort but also her own body.

Gong Lee With the Wind (1996), for instance, epitomizes Chang’s penchant for disregarding boundaries of taste and endurance. For the piece she consumed an astonishing amount of beans, which she promptly defecated. Also testing limits and critiquing standards of feminine bodies and behavior are Shaved (At a Loss) (1998), for which Chang shaved her pubic hair while blindfolded, and Melons (At a Loss) (1998), in which she sliced her bra and ate the pulp of the cantaloupe it contained.
Chang eventually incorporated video into her works, but not as documentations of her actions. Rather, she utilized the camera so that the recordings became part of the performances or illusory perspectives of them. In Fountain (1999) Chang slurped water from a mirror placed on the floor. During public presentations, a strategically placed camera projected her image onto monitors as though she were sitting upright and literally drinking in her own image. _In Love _(2001) disturbingly and seemingly features Chang engaged in passionate kisses with her mother and father; however, rather than depicting incest, the video eventually reveals a recording of the three eating onions in reverse playback.

Shangri-La (2005) signaled a shift in Chang’s practice in which she focused less on her own body or image, using it instead as “a catalyst for specific situations.” Commissioned by the Three M Project (Hammer Museum, Los Angeles; Museum of Contemporary Art, Chicago; and New Museum of Contemporary Art, New York), the forty-minute video installation addresses the effects of the mythification and resultant marketing of Chinese culture. Shangri-La depicts Chang’s journey to Zhongdian, a rural Chinese village that declared itself the real “heaven on earth,” as suggested in James Hilton’s novel and Frank Capra’s film, Lost Horizon. It was a claim that other Chinese towns later challenged with the hope of attracting tourists, thus sparking a marketing battle in which the government had to intervene.

Rather to Potentialities (2009) also examines the filmic practice of “body dubbing” wherein studios remake films for international audiences with the same or a different cast. Chang’s work juxtaposes several scenes from The Flame of Love, which stars Anna May Wong, the first Chinese American film star. Wong starred in each of the French, English, and German versions of the film, but opposite three different leading men. Chang’s video raises questions about Wong’s role as the proverbial Center of each film while also signifying the exotic Other in each European culture.

In many ways, Contortion (2000) serves as a link between Chang’s works from the 1990s and 2000s. It speaks to her early feminist analysis and subversion of gender roles, particularly as seen in Alter Ergo (1997), a performance in which she comments on female submissiveness by forcing her body into twisted, uncomfortable positions. Further, it foreshadows Chang’s subsequent in-depth focus on the construction of Chinese culture and characters. Contortion presents Chang in another extreme pose in which her legs appear to curl over her head from behind. Like much of the imagery and ideas of Asian women as exotic and compliant in popular culture, Chang presents a deceptive construction. That is, the upper half of another woman has been cut out of the frame, so that her legs dangle above as if they are Chang’s. The artist then pulls them down and around her neck while smugly grinning at the camera. Contortion ultimately challenges viewers to consider the facts behind the fiction of its imagery as well as other representations of Asian women. —Kanitra Fletcher