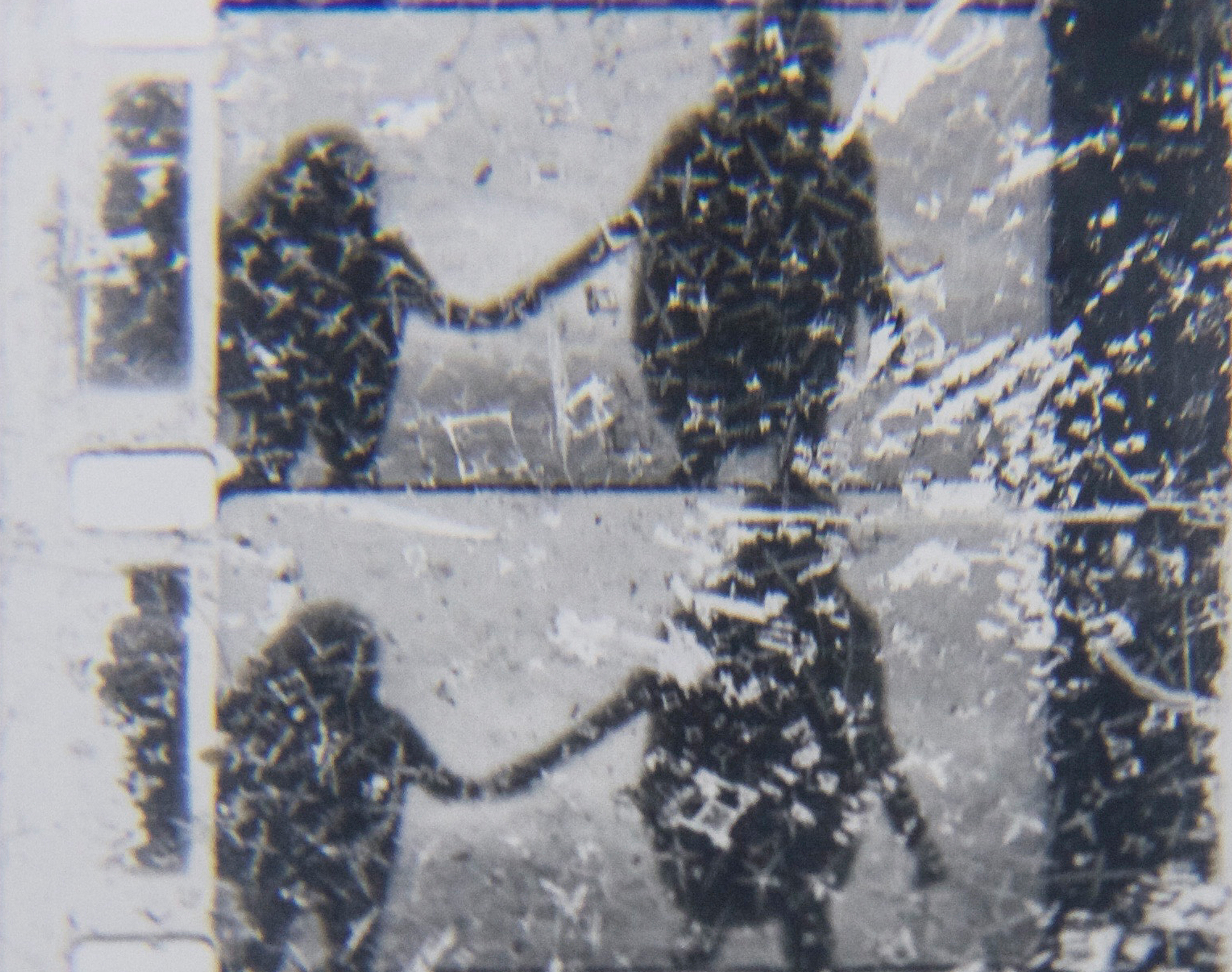 In the videos Asimilar y Destruir (Assimilate & Destroy) I and II (2018–19) one follows a succession of images shown on corroded 16 mm filmstrips. As the filmstrips advance, views of people skating in an ice rink and scenes of an older woman on a beach commingle with evidence of the film’s erosion. Marks, scratches, and imprinted matter intermittently obscure, accompany, or replace the earlier images. The formation of these layered pictures visualizes the past while alluding to current environmental and political conditions in Puerto Rico, and together they are emblematic of how “climate conditions memory in the tropics,” a key concern of the artist Sofía Gallisá Muriente.

Muriente works mainly with video, film, photography, and text. She earned her BFA at New York University and, in 2011, co-founded IndigNación, a Spanish language multimedia collective born out of the Occupy Wall Street movement. In 2012, she co-founded Restore the Rock, a nonprofit hurricane relief organization dedicated to people-powered recovery after Superstorm Sandy. Muriente then returned to Puerto Rico, her birthplace, in 2013, after nine years in New York and, from 2014 to 2020, was co-director of Beta-Local, which is dedicated to fostering knowledge exchange and transdisciplinary practices in Puerto Rico.

Muriente began the Asimilar y Destruir series not long after Hurricane Maria, which devastated Puerto Rico in September 2017. Following the catastrophe, Muriente realized she could no longer make beautiful, high-resolution images of her home. She instead wanted to create art to contend with the politics of Puerto Rico’s current environmental and financial circumstances, but from an unexpected angle that avoids partisanship of political discourse. For instance, in Asimilar y Destruir II she uses footage she filmed of her grandmother María Luisa Pérez Jiménez at the beach near her home in Toa Baja. Muriente explains that her grandmother’s life is inseparable from the “contradictions of colonialism” and is “interwoven with the epic narrative of Puerto Rico in the 20th century.” That is, María Luisa migrated from a rural area to an urban center; she was part of the diaspora to New York and the return to the island; worked in schools, hotels, and factories; and survived extreme weather and abusive husbands while raising two children. Muriente’s grandmother therefore figures as a way to access Puerto Rican history through intimate relations rather than official records.

After Muriente’s grandmother passed, the artist hung the film from the beach, exposing it to the salt, heat, humidity, and wind, then buried it in the dirt, leaves, and bugs of her grandmother’s backyard. When she unearthed the film weeks later, Muriente saw that images had both disappeared and emerged. The decomposition of the film coupled with the wistful images of her grandmother poetically addressed impermanence and the uncertainty of life as well as the history of Puerto Rico, which is exacerbated by the environmental and financial ruin of the island.

As Muriente overheard a patron say at a bar one night, “there can be no paradise without debt.” Her Asimilar y Destruir series thus addresses the projection of fantasy onto the Caribbean by outsiders and tourists, a colonialist distortion of island life as idyllic, and the realities of the stress, exhaustion, and uneven recovery in Puerto Rico. Muriente’s filmstrips were a means for her to deal with the fleeting nature of the tropical climate and process her own feelings of loss and sorrow after Hurricane Maria. Moreover, her art is a way to create new documents and memories that have the potential to fill in gaps of the history of her country and expand those narratives to include personal lived experiences. –Kanitra Fletcher