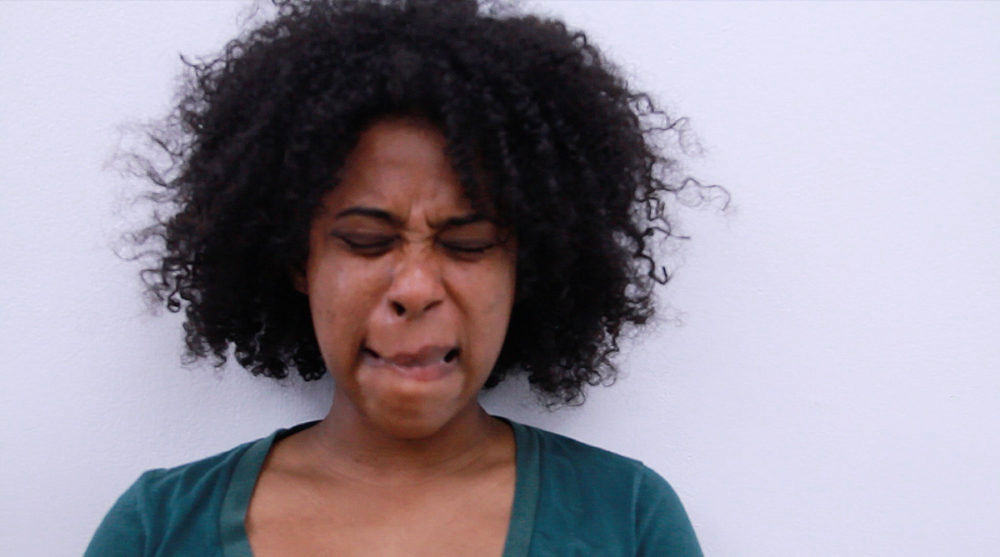 Born in Agana, Guam, in 1979, Tameka Norris moved to Gulfport, Mississippi, with her family when she was three years old. In 1997, while still a teenager, she moved to Los Angeles to pursue a rap career. With a record deal and tour dates, Norris chose to empower herself further in the industry and studied audio engineering to be able to record her own music. However, after modeling for an artist, she thought about becoming one herself and exploring the ways in which she could be in control of her own image. Then Hurricane Katrina struck. As the homes of her family and friends were destroyed, Norris was unable to concentrate on school and began to paint.

With the pieces she made over the course of the disaster, she applied to UCLA and was accepted. In 2009, she attended Skowhegan School of Painting and Sculpture, and the following year, she earned her BA from UCLA. Norris then entered the MFA program at Yale University. Although she endured [encountered?] difficult social experiences as a black queer woman artist, she persevered and graduated in 2012. Norris believes her academic training was necessary for validation in the art world, but also asserts, "You can be a part of a system without being complacent within it." Thus, much of her recent work involves a combination of personal involvement in, and social critique on, the university arts experience.

Norris’s art also grapples with cultural erasure and appropriation. In her words, her “practice critiques the invisibility of blackness in cultural forms built upon the appropriation of popular and sacred black expressions and idioms.” Norris articulates these circumstances in a range of mediums, including music, video, painting, assemblage, and performance. Her work has been in solo exhibitions at Savannah College of Art & Design; Contemporary Arts Center, New Orleans; David Shelton Gallery; Houston; Emerson Dorsch Gallery, Miami; Ronchini Gallery, London; and Lombard Freid Gallery, New York. She also has participated in Prospect biennials 1.5, 2, and 3 in New Orleans.

Norris’s early work consists of paintings and soft sculptures constructed from found fabrics, including bed sheets and tablecloths salvaged from homes in Mississippi Gulf Coast neighborhoods destroyed by Hurricane Katrina. She worked from her memory and photographs to produce works that document her personal experiences with stitched and written autobiographical narratives. These series also include depictions of familiar images and family houses in Gulfport and Biloxi, Mississippi, and New Orleans that bear titles such as M. Rose, Josephine, Bernadine, Waffle House, Piggly Wiggly 2, and Pass Rd. to reference women in Norris’s family who have passed away, or streets and establishments in the areas.

These lovingly crafted, abstract works contrast from Norris’s equally introspective, but highly animated and provocative, performative work that viscerally engages issues of race, gender, and class. In one of her first videos, Licker (2010), the camera follows the scantily, outrageously clad Norris as she parades the UCLA campus rapping, “I'm that black Cindy Sherman and that little Kara Walker. Basquiat resurrected from the dead motherfucka…." She moves from the inside of a university hallway locker to the façade of the Broad Art Center and eventually an outdoor sculpture garden, where she provocatively mounts and licks the breasts of Gaston Lachaise’s sculpture Standing Woman. As the video indicates, Norris likes “the idea of combining art academia and rap braggadocio."

In the video, Norris transposes the language and aesthetic of hip-hop onto a backdrop of art historical objects and institutions. In fact, throughout her career, she has inserted herself into narratives, art historical and otherwise, that do not consider the black experience. In Free Bird (2011), Norris produced a montage of herself dancing on a beach to the Lynyrd Skynyrd anthem. In so doing, she asks, “How do you take a song that is loaded with such a type of a history, type of people—the Rebel flag, the good old boys—but it is a beautiful song none the less?... How can I take that, and knowing what I know about my own history and the history of the South, try to reclaim it?”

In other videos, Norris riffed on Marina Abramović’s work by chanting, "Art must be beautiful, artists must be beautiful." as she frustratingly rips a comb and brush through her curls. She recreated Michelangelo Pistoletto’s sculpture Venus of the Rags with herself posing as the statue with her back to the viewer in front of her own brightly colored clothes piled on the floor. Norris also reenacted Bruce Nauman’s Walking in an Exaggerated Manner with a piece of the same name, in which she slowly and dramatically traces a square on the floor for ten minutes. In each of these works, Norris recreates works by white artists to force a critique about the presence of the black female body in art history.

Norris also has inserted her body in more daring, unconventional ways, such as in Untitled (2012). This performance piece involves her cutting her tongue with a knife and licking a bloody dripping line along the gallery wall to form what essentially is an abstract painting. She also has taken video art to another level with the development of a feature-length film and the introduction of her alter ego, Meka Jean, a “ratchet” streetwise rapper born during Norris’s time at Yale. Norris has explained, “Character development…helps [her] tap into personal history and memories.” Accordingly, Jean stars as a woman who hopes to become a singer and painter against the backdrop of a post-Katrina New Orleans in How She Got Good (2014). Just as the city undergoes social, physical, and emotional changes, so does Jean, and we follow her successes and shortfalls in art, music, and personal relationships.

Norris’s Untitled (Say Her Name) (2011–15) does not feature Meka Jean, but it does speak to the artist’s personal concerns as they relate to the recognition of black womanhood in not only art but also society. In the video, Norris sits expressionless in front of a plain white background. Her lips appear pursed, but gradually as she passes through a series of facial movements, we see they actually are glued together. For nearly five minutes, the viewer watches her painfully struggle to free her mouth. With this silent, minimal gesture, Norris speaks to the silence and invisibility surrounding the loss of black women’s lives for which the campaign #SayHerName was created to address.

The hashtag refers to the number of women and girls who are killed by law enforcement officers, and how racism and sexism play out on black women’s bodies. Moreover, it indicates the reality that black women are vulnerable to the same justifications used for killing black men, yet their deaths—which include Rekia Boyd in Chicago; (seven-year-old) Aiyana Stanley-Jones in Detroit; Tanisha Anderson in Cleveland; Yvette Smith in Bastrop, Texas; Sandra Bland in Waller County, Texas; and almost seventy other cases (many taking place since only 2013)—largely go ignored by the public. Nonetheless, while these circumstances are distressing, Norris’s act provides a sense of hope as her eventual release suggests the difficult and enduring struggle is not over and has not been lost.—Kanitra Fletcher