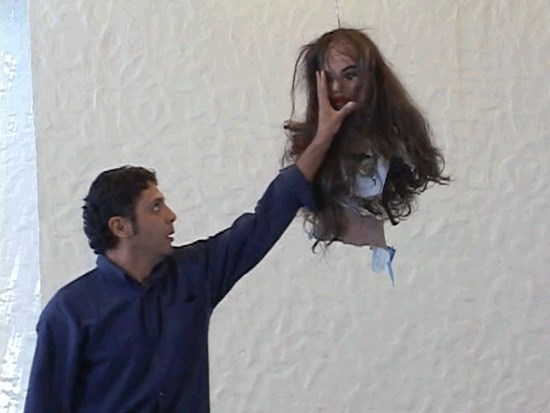 Teresa Serrano (born 1936 in Mexico City) has developed a wide-ranging artistic practice informed by various areas of interest, but a central part of her artistic process is a reflection on her experience as a woman. Her artwork, which comprises sculpture, painting, drawing, photography, and video, mainly deals with the bodies and social roles of women as well as the violence and discrimination against them.

Serrano began her artistic career in 1975, around the age of 38, after her six children had grown up. She explains, “I felt like a glove in my husband’s hand. And the problems started, because I started to want to be me and he [started] to not let me be me.” Nonetheless, she began painting with some friends and took it seriously. She then worked in the studios and workshops of several artists, including Dolores de la Barra in 1978, Xavier Arévalo in 1980, and José Feher in 1982, the year in which Serrano divorced her husband and moved to New York. She now lives and works in Mexico City and New York.

When Serrano arrived in the latter city, she began making sculptures from a variety of media, such as iron, steel, fabric, ceramic, and fiberglass. Her Fertility Series includes several pieces under the title Umbilical Cord (1993), which are primarily made from metals and mirrors, and pieces titled Goddess of Fertility (1993), which consist of embroidered fabric shaped into large balls that are strung together and hang from monumental iron poles.

Her practice then evolved to audiovisual productions in the late 1990s. In these works, Serrano portrays ordinary situations that illustrate the abuse of power, typically sexual harassment in the private and professional environment. Several of her early videos also appropriate the style and drama of telenovelas. Mía (She’s Mine) (1998–99) is a series of four shorts that approach the problems of machismo and sexual harassment by observing typical daily interactions between men and women in the office, at a restaurant, and in other settings. Ritual (2000) also depicts a male-female relationship to explore sadomasochistic physical and psychological violence. A couple arrive home after a party, and proceed to argue. The woman complains about an affair the man supposedly is having. He hits and shouts at her, but she ultimately forgives him. The title unfortunately indicates this was not the first, nor will it be the last, time such an episode occurs.

Serrano later began to explore themes of fear, anxiety, and obsession using the language of cinematic genres. A Room of Her Own (2003) evokes a film noir to examine the uneasy frame of mind of a woman who repeatedly confronts her demons in the form of large dark shadows. Boca de Tabla (Wooden Mouth) (2007) also follows a restless woman as she wanders incessantly through a large house from one room to another, stopping only to observe herself in mirrors and perform minor tasks. The video WW (2006) adopts a more playful tone for a metaphor on the impossibility of being a superwoman despite all kinds of social pressure to be one. It takes on the superhero genre to tell the story of a mature woman, dressed as Wonder Woman, who flies through the skies of New York City. She enjoys her power and freedom until she loses her balance and collapses.

In 2008, Serrano created The Glass Ceiling, a short video that exemplifies the discrimination suffered by women in the workplace. Just as the so-called Glass Ceiling effect reins in and restricts ambitious professional women from climbing the corporate ladder, in the video, a male cowboy character uses his lasso to rein in a woman who is climbing a staircase to an office building, like she is cattle. The repeated delays in the woman’s climb allow the man to walk past her into the office and lock her out. In the end, she resorts to breaking the glass door with her purse, leaving her success or failure ambiguous.

Serrano made the film to demonstrate how, in Mexico, among most other locales, women’s rights are still lacking and machismo prevails in all social classes. Similarly, but in a far grimmer manner, she created La Piñata (2003) to address the repercussions of the lack of rights for working-class Mexican women. In this extremely (and literally) hard-hitting video performance, we watch a man batter a piñata shaped and dressed like a young woman. Serrano uses a common childhood game that usually ends with a reward to construct an allegory of femicide that ends with no penalty.

In particular, La Piñata addresses the murders of hundreds of young women working in the manufacturing companies of Ciudad Juárez, on the border of Mexico and the United States, whose cases have not been solved. Many of the victims were murdered after enduring unspeakable acts of torture and sexual violence. Thus, Serrano’s video effectively alludes to the moments of those women’s demise, rendering the viewer complicit in the scene. She forces the viewer to bear witness to how the man accosts, lasciviously pats, and fondles the piñata during long, excruciating silent moments before repeatedly bashing the limbs and body of the object, eventually destroying it with impunity. —Kanitra Fletcher