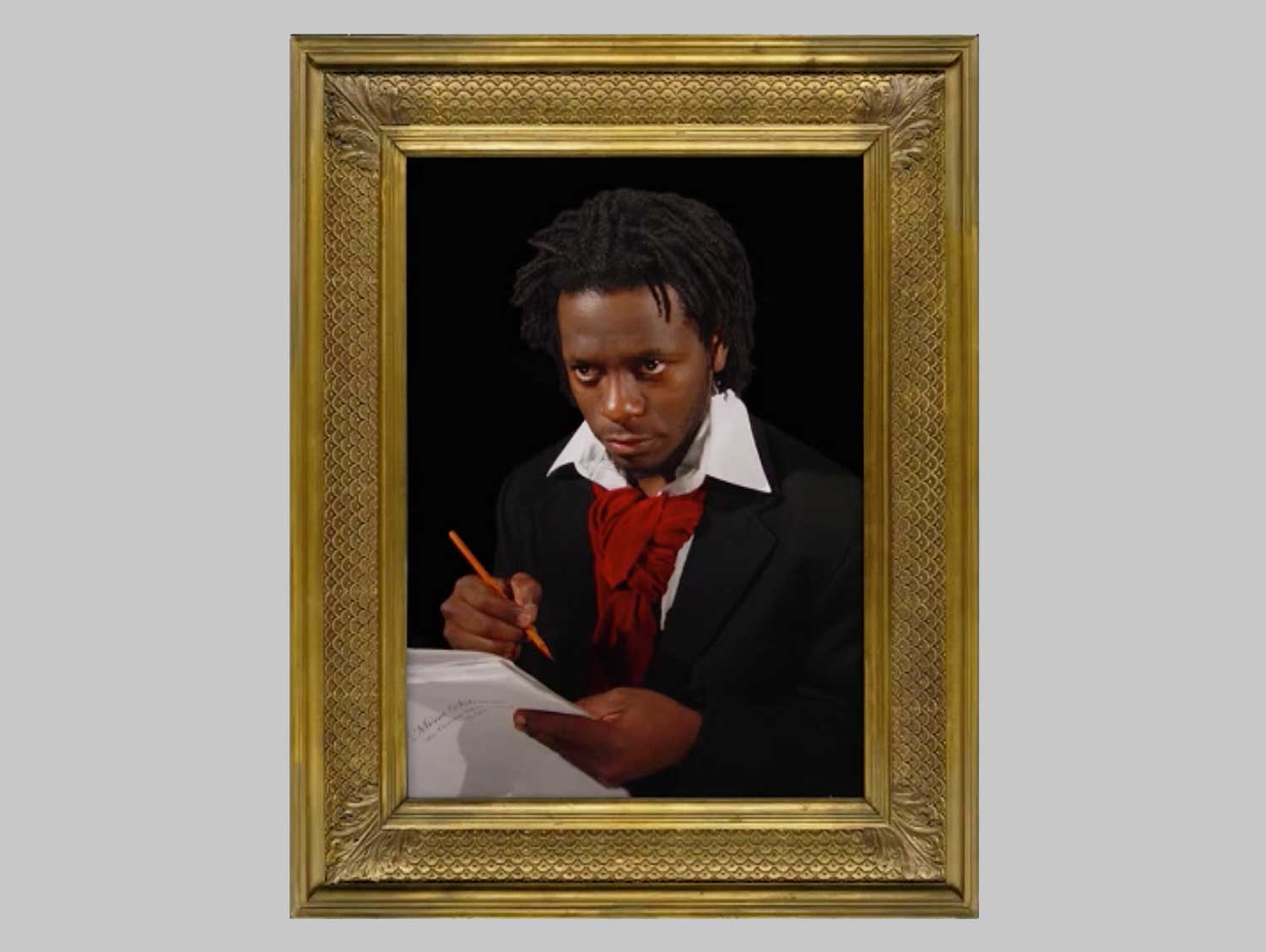 Interdisciplinary artist and musician Terry Adkins worked in ways that consistently blurred, merged, or defied categories. In abstract, conceptual works, he probed the biographies and narratives of historical figures to shed light on neglected aspects of their lives. Adkins explained in 2006 that he used “figures in history whose contributions to society are either under known, underappreciated, or just not given the stature that I believe they should have in society.” As Adkins reintroduced his subjects, he also called into question the processes by which people are classified and their pasts become (or do not become) a part of history.

Born in 1953 in Washington D.C, Adkins grew up in a musical household—his mother was an amateur pianist and clarinetist, and his father played organ and sang in the church choir—in Alexandria, Virginia. Music also played a critical role in his art, for which he earned a BS from Fisk University in 1975, an MS from Illinois State University in 1977, and an MFA from the University of Kentucky in 1979. Adkins also was known to be generous and supportive to young artists. This quality aided him during his tenure as a professor of fine arts in the school of design at the University of Pennsylvania, a position that he held for the last fourteen years of his life, until his death on February 8, 2014, at his home in Brooklyn, NY.

Adkins emerged in the mid-1980s, when he began reconstructing instruments from weighty and weathered found and fabricated materials, such as textiles, farm tools, leather straps, and shipping ropes. Yet, he resisted the art historical term “found object,” which he believed did not pay enough respect to the materials or his process. Adkins preferred the term “potential disclosure” to describe his creative use of salvaged materials. Defining it as the possibility of revealing life that lies dormant in inanimate things, Adkins also likened it to what he called “the African American tradition of ennobling worthless things.”

His work was once described as having “an aura of being simultaneously ancient and modern, informed by both Old World traditions and by Minimalism’s reductive forms. Adkins’s visually striking creations—such as his Arkhaphones, a set of giant eighteen-foot-long playable horns, and Avarium (2014), variously sized cymbals rung around aluminum rods that jut out from the wall—embody musicality and he sometimes used them as accompaniments to his practice as a musician. In 1985 Adkins founded the multimedia performance collaborative Mirliton and later the band Lone Wolf Recital Corps, whose music Adkins would incorporate into his “recitals.”

Adkins’s recitals were installations that created dialogues between music, video, text, sculpture, and the spoken word. Through them he interpreted his deep immersion into the lives and experiences of historical figures. With the 2013 recital “Nenuphar” Adkins focused on unfamiliar aspects of and connections between the legacies of George Washington Carver and Yves Klein. “The Principalities” from 2012 was devoted to Jimi Hendrix and explored his service as a paratrooper in the 101st Airborne Division at Fort Campbell, KY. Adkins also has examined the lives of abolitionist John Brown and the blues singer Bessie Smith, and he has visualized connections between W.E.B. Du Bois and Mao Tse Tsung.

His video Synapse (2004) was developed as a part of his “Black Beethoven” series, which explores the myth of Ludwig von Beethoven being black, as he had Moorish ancestry. In the work, Adkins presents a portrait of the iconic composer that slowly morphs into that of a young black man with short dreadlocks and back again. The repeated transformation of the image conveys Adkins’s unwillingness to settle the debate on Beethoven’s race. He explained, “I hope to generate a sense of seeking in the audience…. You can then fill in the gaps and participate in history in your own way." Of more interest to Adkins was the triumph of Beethoven in overcoming his deafness to create some of the world’s most powerful music. Thus, to relate to Beethoven’s experience of remembering what it was like to hear various sounds, Adkins countered the subtlety of Synapse’s images with an extremely abstract, yet visceral, sound. Adkins recounts, “The gift [of Beethoven’s hearing] was taken away, and yet he transcended all that.” Likewise, despite the loss of Adkins, his art continues to reimagine pasts for future viewers. —Kanitra Fletcher