Kara Walker: The Fact of Fiction 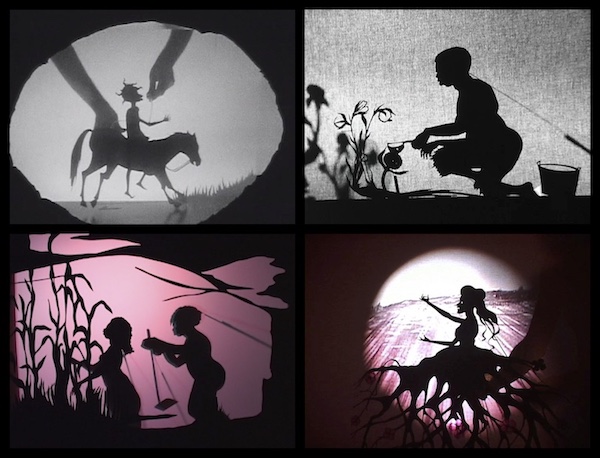 Kara Walker entered the annals of art history in the mid-1990s by turning the genteel eighteenth-century genre of the cut paper silhouette on its head, shaping the forms into disquieting panoramic friezes. She creates intense, immersive environments in which starkly depicted figures—usually black forms against a white wall—engage in eroticized, racially charged violence. Her huge tableaus of perverse vignettes address the history of American slavery and the persistent, residual racism of today.

In the early 2000s Walker extended her practice into film and video. In this exhibition, she shapes facts into fiction with four works based in the antebellum era. Each narrative sets her celebrated silhoutted figures into motion and within scenarios that re-imagine traumas of the past and evoke remnants in the present.

The Fact of Fiction: Four Works by Kara Walker is an exhibition in partnership with the Visual Arts Center, on view 25 September - 20 November, 2020. All works courtesy of the artist and Sikkema Jenkins & Co., New York. The exhibition is curated by Kanitra Fletcher.

Below are resources that approach Kara Walker's work from a diverse set of perspectives. We invite you to explore them as a starting place for your own inquiry and contemplation.

At this time, all visits to The Fact of Fiction: Four Works by Kara Walker must be scheduled in advance. Appointments may be made online or by emailing the VAC.

If you missed Viewpoint: A Conversation on Kara Walker, you may access the recording below:

Viewpoint: A Conversation on Kara Walker

And as an encore presentation, October 7th's talk was extended to include a second virtual panel discussion. Check it out below:

The Fact of Fiction: A Conversation on Kara Walker Encore Presentation

Kara Walker entered the annals of art history in the mid-1990s by turning the genteel eighteenth-century genre of the cut-paper silhouette on its head, shaping the forms into disquieting panoramic friezes. Walker creates intense, immersive environments in which starkly depicted figures—usually black forms against a white wall—engage in eroticized, racially charged violence, producing huge tableaus of perverse vignettes that address the history of American slavery and the persistent, residual racism of today. As critic Hilton Als has written, “In Walker’s work, slavery is a nightmare from which no American has yet awakened: bondage, ownership, the selling of bodies for power and cash have made twisted figures of blacks and whites alike, leaving us all scarred, hateful, hated, and diminished.”

In 2004, Walker began producing films and video works, propelling her wall-based works into new dimensions of time and motion. The narratives suggested in her tableaus are inherently inconclusive due to their stationary nature; however, in the transition to film and video, they play out to their full, unsettling potential. In four works— Testimony: Narrative of a Negress Burdened by Good Intentions (2004); 8 Possible Beginnings or: The Creation of African-America, a Moving Picture by Kara E. Walker (2005);…calling to me from the angry surface of some grey and threatening sea (2007); and Fall Frum Grace, Miss Pipi’s Blue Tale (2011)—Walker renders her antebellum characters as stick puppets that cavort and revolt, and punish and pleasure, each other. She combines startling character developments and plotlines with an array of production techniques that complicate not only the imagery but also our beliefs about facts that have been fictionalized.

Walker’s scenes disrupt established slavery narratives with clear-cut victims and victimizers. Rather than producing one-dimensional views of enslaved people and enslavers, she creates three-dimensional characters. In the silent film Testimony, for instance, the roles of Black women and White men reverse. After a young Black woman sodomizes a man with a broomstick, a title card declares, “We [Black women] refused to revert to the old order. We embraced our new positions.” The next sequence shows the woman cracking a whip on the backs of two drunken men. Later this same character shoots and lynches a man whose hanging body she fellates. Walker then closes the film with an allusion to ejaculation as paint splashes repeatedly onto the young woman’s face. The viewer is left to reckon with the unsettling ambivalence of Walker's ending, wondering if the gesture is meant to convey pleasure or contempt.

The woman’s behavior exemplifies how stereotypical figures of mammies and pickaninnies become fully formed individuals whose sordid actions nonetheless serve as signs of character development in Walker’s work. Black women are not merely subject to abuse; they have agency, and, with their newfound power, they perversely subject others to their abuse. These exploits suggest the ways in which slavery damages all people who are trapped in the system as their caricaturized silhouettes ironically appear more human in fantastical scenarios that provide greater information about their context, desires, and motivations. Walker therefore does not excuse, celebrate, or misremember slavery. Instead, as her characters evolve (or devolve), she makes the institution strangely real and even more horrifying.

At the same time, the works disallow illusion. This refusal is made most clear when Walker reveals her own silhouette behind scrims manipulating the puppets with sticks and strings. When her figure appears, it interrupts the viewer’s suspension of disbelief and evokes the ways in which histories are interpretations of facts, constructed from individuals’ points of view. Walker’s figure reminds us she is the storyteller, but the teller of a story we know she did not witness.

The intimate, private moments that occurred during historical events, particularly exchanges between enslaved people and their enslavers, cannot be known for certain. Our twenty-first century minds can only imagine the horrors that occurred within the institution of slavery, as Walker has forcefully done throughout her artistic career. By producing shockingly bizarre representations, she emphasizes the unknowability of slavery and how this circumstance allows the popular imagination to invent notions about the past. Walker’s consequent irruption of those ideas challenges our complacency with and complicity in those beliefs.

Furthermore, the destabilizing appearance of the artist is matched by the improbability and illegibility of the plots, in which Walker confounds expectations of her characters’ sagas. In Eight Possible Beginnings, we observe a Black man birthed from excrement, who later is impregnated when his White male lover inserts a cotton ball into his anus. He then births a new cotton ball that he plants in a field where it grows into a tree with branches from which the bodies of lynched Black men hang. And, in …calling to me, a Black woman rises from her grave at the beginning of the video only to return at the end. Within this loop, we watch her nurse her young son, who later loses his leg to a White man, who saws it off as punishment for playing with a White girl. The boy then sees his mother offer her breast to that same White man, which launches the boy into a murderous rage, killing both the man and his mother whose nipple he takes into his mouth as she dies.

These tales are told in zigzag formats with fragmented sequences and abrupt chronological shifts that confuse their already outlandish plots. The nonlinear narratives evoke the uncertainty around historical, personal lives, but it is an uncertainty that allows for the boundless potential of the artist’s creativity. As artist Carroll Dunham writes in reference to Walker: “Artists have the luxury, if not the duty, denied many others to represent the true multivalence and anarchic lust that characterize much of human inner and social experience, without the limiting—and comforting—construction of being ‘right.’”

In multiple ways Walker’s film and video works demonstrate how we connect to histories by imagination and projection, and shape facts into fictions. Rather than re-creations of the past, they are indicative of the traumas of historical acts of abuse and violence not experienced but transmitted to later generations through stories and images that resonate in the present day. Indeed, Walker’s exaggerations do not depict or even comment on the realities of slavery. Rather, they speak to how Americans at large have yet to fully reckon with this institution on which the country was built. Until then, as devastating reminders, protests and uprisings will continue to loop in our society like the narratives of Walker’s films and videos onscreen. —Kanitra Fletcher 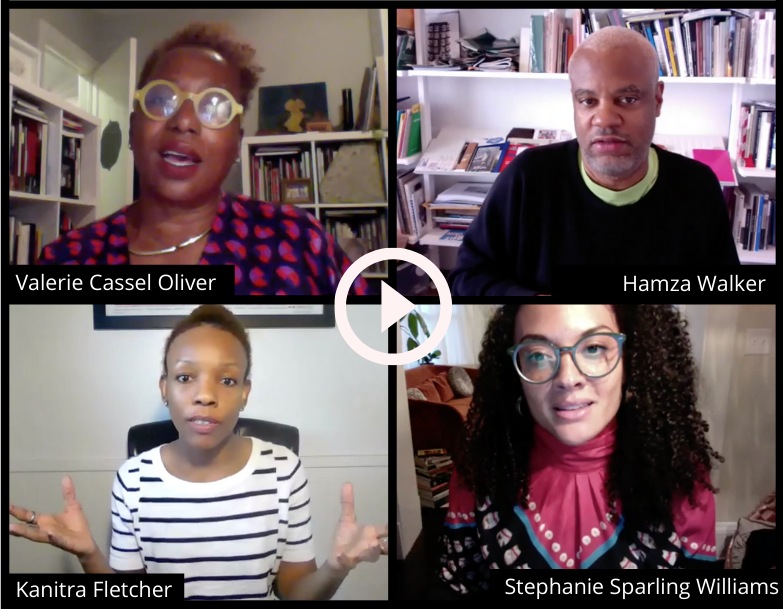 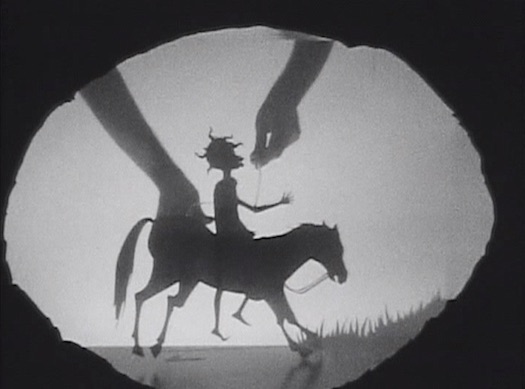 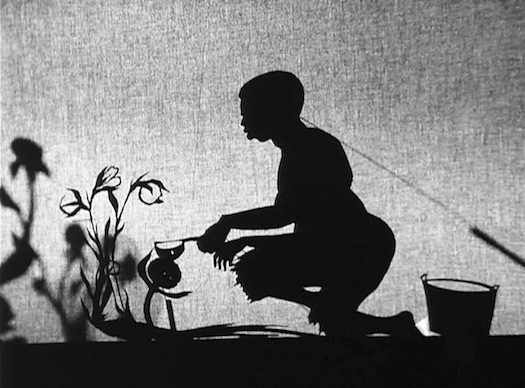 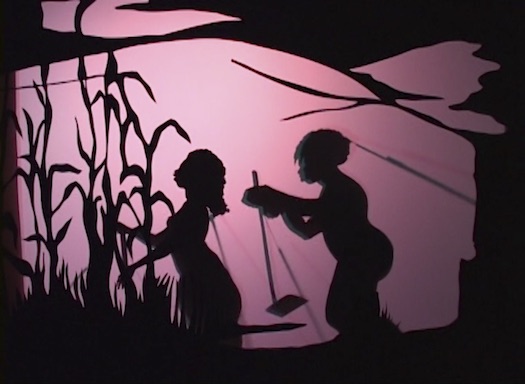 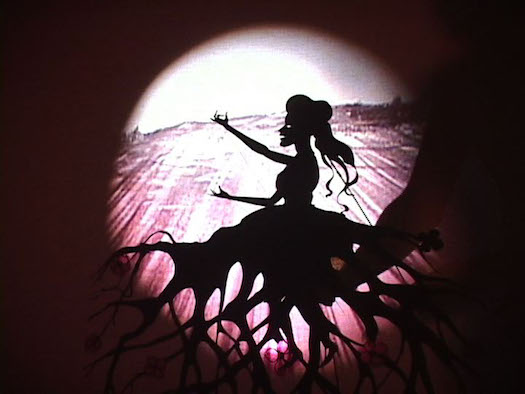 Zadie Smith, "What Do We Want History to Do to Us?," Kara Walker: Hyundai Commission. London: Tate Modern, 2020, https://landmarks.utexas.edu/sites/default/files/zadie_smith_kara_walker_what_do_we_want_history_to_do_to_us_the_new_york_review_of_books.pdf

Ashley D Stevens, "The pushback against how Black suffering and victims of violence are depicted in art," Salon, July 27, 2020, https://www.salon.com/2020/07/27/black-suffering-art-emmett-till-tamir-rice/.

Charlie Brinkhurst-Cuff, "Turbine Hall artist Kara Walker: 'Apparently, the only thing I am is black,'" The Guardian, September 23, 2019, https://www.theguardian.com/artanddesign/2019/sep/23/kara-walker-turbine-hall-tate-modern-racially-charged.

SFMOMA, "Kara Walker on the dark side of imagination," filmed June 2005, video, 2:04, https://www.sfmoma.org/watch/kara-walker-on-the-dark-side-of-imagination/.