In the next installment of her series about classical mythology in the Landmarks collection, Dr. Jamie D. Aprile discusses the importance of context for depictions of mythological figures to acquire a more complete meaning. Read about postwar symbolism in Prometheus and Vulture in Aprile's second post.

In his sculpture Winged Victory, or Samothrace (Fig. 1), artist and architect Frederick Kiesler was inspired both visually and ideologically by the Hellenistic masterpiece, the Nike of Samothrace (Fig. 2).  Kiesler worked for most of his career as a designer of theatrical sets and art exhibits, and in 1939 he formulated an important modernist theory for understanding the relationship between art and space that he called correalism.  The dynamic correlations between objects, environment, and human experiences in all aspects of design should be analyzed, he believed, since their relationship was part of an ongoing spiritual process that lent meaning to existence.  The ancient Greeks understood a similar concept as a central tenet of their religious system.  Images of mythical beings had a divine presence, and their placement in and relationship to the environment held power.  Nike, the goddess of victory, could represent either triumph generally or a specific event, depending on context.  For instance, images of Nike on the Acropolis in Athens were meant to represent a blessing granted to the city when it successfully resisted invasion by the Persian Empire at the beginning of the 5th century BCE.  The ancient Athenians believed the gods not only stood by their side as they fought but continued to support them long afterward. Kiesler’s sculpture provides a model for rediscovering the spiritual potential of art by referencing the context and meaning of the famous Nike. 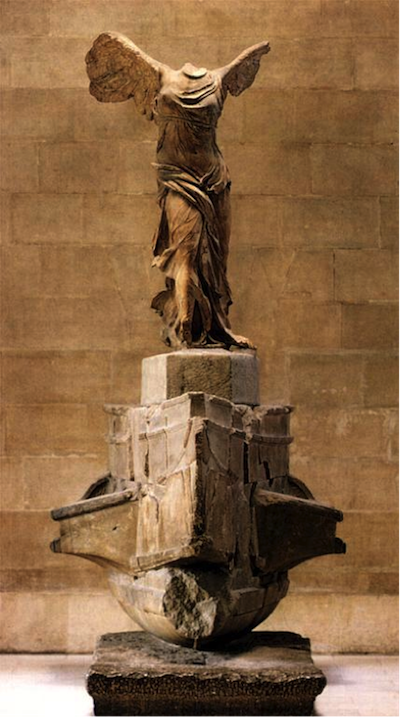 Analyzing the correlations of the ancient sculpture in its original and current contexts demonstrates how useful Kiesler’s theory of correalism is for understanding ancient religious art.  The sculpture was found in the ruins of a sanctuary on the Aegean island of Samothrace by a French amateur archaeologist in 1863. Erected atop the model of a ship’s prow in the upper basin of a two-tier, shallow fountain, the Nike once crowned an open-air theater.  Ripples set alight by the sun would have heightened the illusion of movement in the figure, and strong sea breezes gusting up the hillside would have whipped up spray from cascading water.  The idealized female form strides forward, creating downward momentum that lends the figure weight and power, while the natural upward flow of wind is indicated by the billowing garments and wings.  In an elegant ancient expression of Kiesler’s theory of correalism, the goddess would have appeared to share in and thus elevate human spiritual experience in the sanctuary.  By 1884, the sculpture and its base had been shipped to Paris, where it was placed at the head of the monumental Daru Staircase in the Louvre Museum.  Although the stairs acted as a reference to the former environment, the Nike became a sigil of the worldly power of France.  The spiritual power derived from the integration of art, environment, and worshipper was replaced by a colonial narrative of conquest and display.

Kiesler believed that galleries and museums objectified and sterilized artworks by removing them from daily life.  They acquired meaning, rather, through the experiences of people who interacted routinely with them.  Winged Victory was originally created for poet Ruth Stephan, who installed it in the garden of her Greenwich, Connecticut, estate in December of 1963.  Kiesler draws from the ancient Nike the opposing forces of gravity and resistance in his distinctive biomorphic style, using thick, heavy folds of bronze, while the weight of the material touches down on its pedestal as lightly as her toe alights on the prow of the marble ship.  The sculpture’s dense creases and rough texture suggest that victory can be a struggle—a key element of the ancient symbolism of the Nike’s wings, which appear to fight a strong wind.  We cannot know what Stephan’s unique understanding of the sculpture might have been in her private, personal environment, but it is likely that Kiesler referenced the Nike of Samothrace to confer an additional layer of symbolism, arising from the ancient sculpture’s more recent political history. 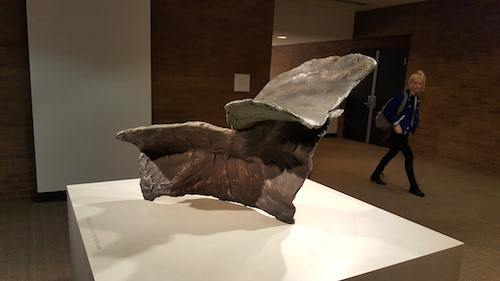 Now on display in Bass Concert Hall, Winged Victory continues to have an active life, inspiring students and concert-goers to reflect on the struggle for victory in their own lives.  While the architecture of the concert hall invites visitors to share a universe of possibilities on the stage, the sculpture’s crumpled bronze can remind us of the performers’ struggle, and the uplifted wings reflect the satisfying catharsis that comes from viewing drama.  Just as the presence of the Nike of Samothrace enhanced ancient religious worship, Kiesler’s Winged Victory enriches the experiences of both actors and audiences. The performance may touch only a brief moment in one’s life, but the effect can live on in memory, as powerfully subtle as the tension between weight and motion.