Landmarks will unveil a new installation by New York City-based artist Beth Campbell on April 11, 2019. The site-specific commission, titled Spontaneous future(s), Possible past, comprises a mobile and companion graphite drawing. Both works will be sited at Dell Medical School’s Health Transformation Building at The University of Texas at Austin.

The commission for Landmarks is rooted in Campbell’s ongoing drawing series begun in 1999—My Potential Future Based on Present Circumstances—which seeks to give physical shape to imagined futures or parallel lives, and which was informed by the artist’s interest in rhizomatic structures, circuit boards, early virtual worlds and a move to New York City. The text-based drawing for Landmarks, the first that Campbell has made in this series in a decade, draws parallels to spontaneous future cognition, a newly developing branch of cognitive psychology that explores the random and involuntary thoughts that individuals have about their future. Campbell begins each work by considering a seemingly mundane or relatable moment from her everyday life—i.e. “I just sat on my brand-new glasses while getting into the car” or “I need to buy a new pillow.” She then uses gestural lines to diagram a flowchart of possible outcomes unfolding from the event, ranging from fantastic to tragic. Like neural networks, the drawings branch out in linear fashion, accumulating narrative tentacular strands that chronicle various possibilities embedded in our lives, resulting from choice or coincidence, exposing the psychological states of the mind and questioning our own relationship to the future.

Campbell’s mobiles extend her potential future drawings into three-dimensional space, expanding her thought process and hypothetical considerations into repeated forms that mirror one another like speculative visualizations of possibility. Referred to by the artist as “drawings in space,” the mobiles are hand made of steel wire. They mimic the twists and turns of complex structures such as the human nervous system, an arboreal root system or social networks.

Delicately charting the human condition with all the gravity and humor of real life, Campbell’s new drawing and mobile for Dell Med reveals the interconnectedness of shared experience.

Celebrate the opening of Spontaneous future(s), Possible past with a free, public Q&A and reception with the artist and theorist Timothy Morton on 11 April. 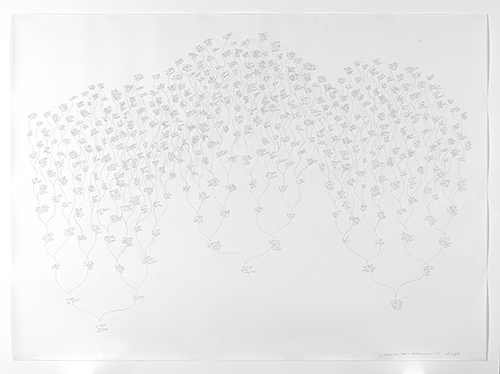 photo courtesy of the artist 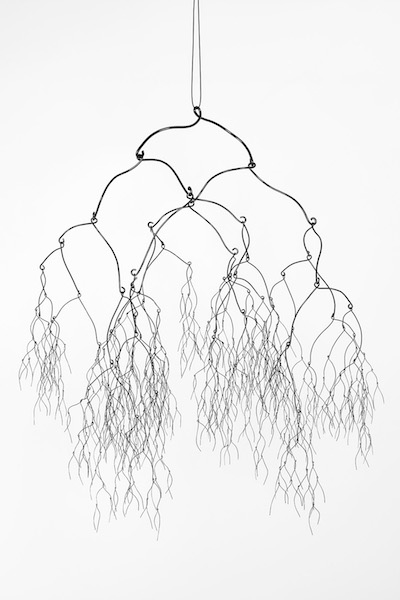