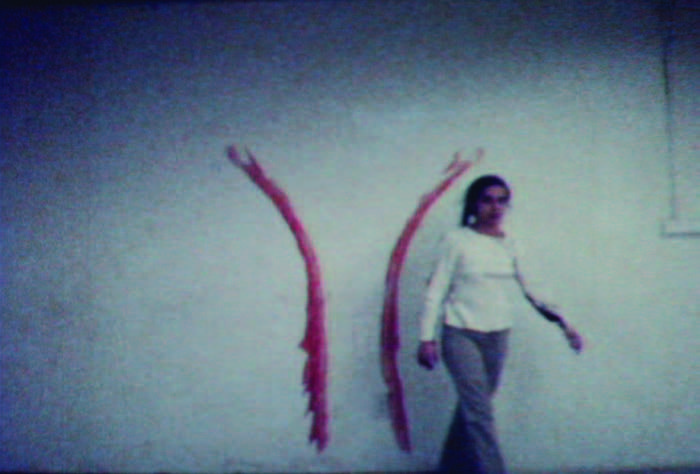 Despite her short life, which ended tragically in September 1985 when she fell thirty-four floors from her bedroom window, Ana Mendieta was and remains an influential artist. From her early innovative, provocative performances to her later symbolic, ephemeral works, Mendieta’s oeuvre continues to challenge the ways in which viewers see relations between the body and time, space, and nature. In addition to those abstract concepts, Mendieta’s work also demonstrates her awareness of the concrete impact of gender, ethnicity, and nationality on daily life.

Mendieta was born in Havana, Cuba, into an aristocratic family. During Castro’s revolution, she was one of the many children who were sent to the United States as part of Operation Peter Pan. In 1961, at the age of twelve, she entered a refugee camp in Miami, Florida, and eventually was sent to a relocation facility in Dubuque, Iowa, with her sister Raquel. In addition to being torn from her homeland and her family members during her adolescence, she found herself in orphanages, foster homes, and boarding schools in the Midwest, where her classmates routinely harassed her with racist remarks. She eventually reunited with her mother and brother in 1966 and her father in 1979. She also returned to Cuba twice, in 1980 and 1981, where she created a series of Rupestrian Sculptures (1981)—carvings in caves and cliffs that evoke prehistoric fertility figures.

Despite or perhaps due to the traumatic events of her childhood, through art Mendieta found ways of expressing her sense of dislocation and isolation. She further developed her artistic skills at the University of Iowa, where she earned bachelor’s and master’s degrees in painting. However, after her graduation in 1972, she gave up painting, which she felt was “not real enough.” She eventually earned a master of fine arts from Iowa’s newly formed, experimental Intermedia Program headed by German artist Hans Breder. In that program, she explored new and challenging ways of achieving her desire for her art “to have power, to be magic.”

Mendieta incorporated various practices and media—film, video, performance, and photography—in several experimental series of images. In Untitled (Facial Hair Transplants) (1972), she transferred a moustache and a beard of fellow male students to her own face. She also appeared mangled, deformed, or concealed by varied instruments such as wigs, pantyhose and panes of glass that she covered over or pressed against her face in Untitled (Facial Cosmetic Variations) (1972).

During this time, Mendieta also used blood in many works, a medium that is symbolic on multiple levels. On the one hand, it suggests death and violence. Following the rape and murder of an Iowa nursing student, Mendieta staged Untitled (Rape Scene) (1973), for which she smeared the lower half of her nude body with blood and tied herself to a table in her apartment. She invited people to enter the darkened space where she lay prostrate and unresponsive on the table; broken dishes covered the floor. The slide show Untitled (People Looking at Blood, Moffit) (1973) also was made in response to a violent crime committed against a young woman. Mendieta placed a large blood-soaked rag on the sidewalk and photographed a series of passersby as they merely glanced at the gory scene beneath their feet.

On the other hand, blood is a life force. It is visceral and powerful, as suggested by its use in religious rituals, particularly those of Catholicism and Santeria, with which Mendieta was familiar in Cuba. Untitled (Death of a Chicken) (1972) references the latter Afro-Cuban religion. Standing nude and in front of a white wall, Mendieta held a newly decapitated chicken by its feet. As the animal struggled, its blood splashed across the floor and wall, inadvertently creating an Abstract Expressionist–like scenario and artwork. Bird Transformation (1972), another performative piece, involved covering her body in blood and rolling in white feathers to transform herself into a fowl. Blood also figures as that which runs through our veins in the video Sweating Blood (1973), as the fluid appears to drain from Mendieta’s scalp.

Similarly, in Untitled (Silueta Series, Mexico) (1974), blood fills the form of Mendieta’s silhouette, which she carved into the earth as part of the series for which she is best known—the two hundred Siluetas she began in Mexico and continued to create in various locations around the globe between 1973 and 1980. Each Silueta involved the immersion of Mendieta’s body with nature, either literally, by lying naked within landscapes, or figuratively, by creating outlines of her body from an array of materials, such as mud, sand, rocks, leaves, grass, flowers, and branches. The works suggest that while bodies demarcate spaces, spaces also define experiences in the world. In a sense, the Siluetas recall Mendieta’s formative years—her removal and relocation to various spaces and her subsequent struggles to fit in or adjust to each of them.

Nonetheless, one should not regard the Siluetas as a meditation on loss or longing entirely. While empathic, that interpretation delimits Mendieta’s identity and the possibilities of how she and others respond to exile, emigration, and other similar circumstances. The Siluetas are spaces from which Mendieta willfully departed. She physically defined her body then stepped away, in a sense liberating herself literally and also figuratively from defined parameters and fixed categories. The works suggest both her absence and presence and imply a desire for and doubt of classifications like gender, ethnicity, sexuality, and nationality, which also change through spaces and societies. Thus, the Siluetas are uncanny spaces that facilitate the confusion, interrogation, and eventual negotiation of meanings.

Likewise, Blood Sign #2/Body Tracks (1974) also demonstrates the variability and intermediacy of Mendieta’s work in a quick, simple action with a complex, enduring effect. The video begins with Mendieta standing against a wall in a sacrificial manner with her arms extended up and outwards in a V. She then slowly slides herself down the surface and onto her knees, leaving behind red trails from her blood-soaked hands as she rises to look into the camera and walk out of the frame. Part performance, part painting, the act of Blood Sign #2 yields a large-scale minimalist image evocative of a tree or other upward-rising form. Thus, despite its initial connotations of pain, suffering, or demise, Mendieta’s act transforms into a symbol of life, hope, and growth. —Kanitra Fletcher