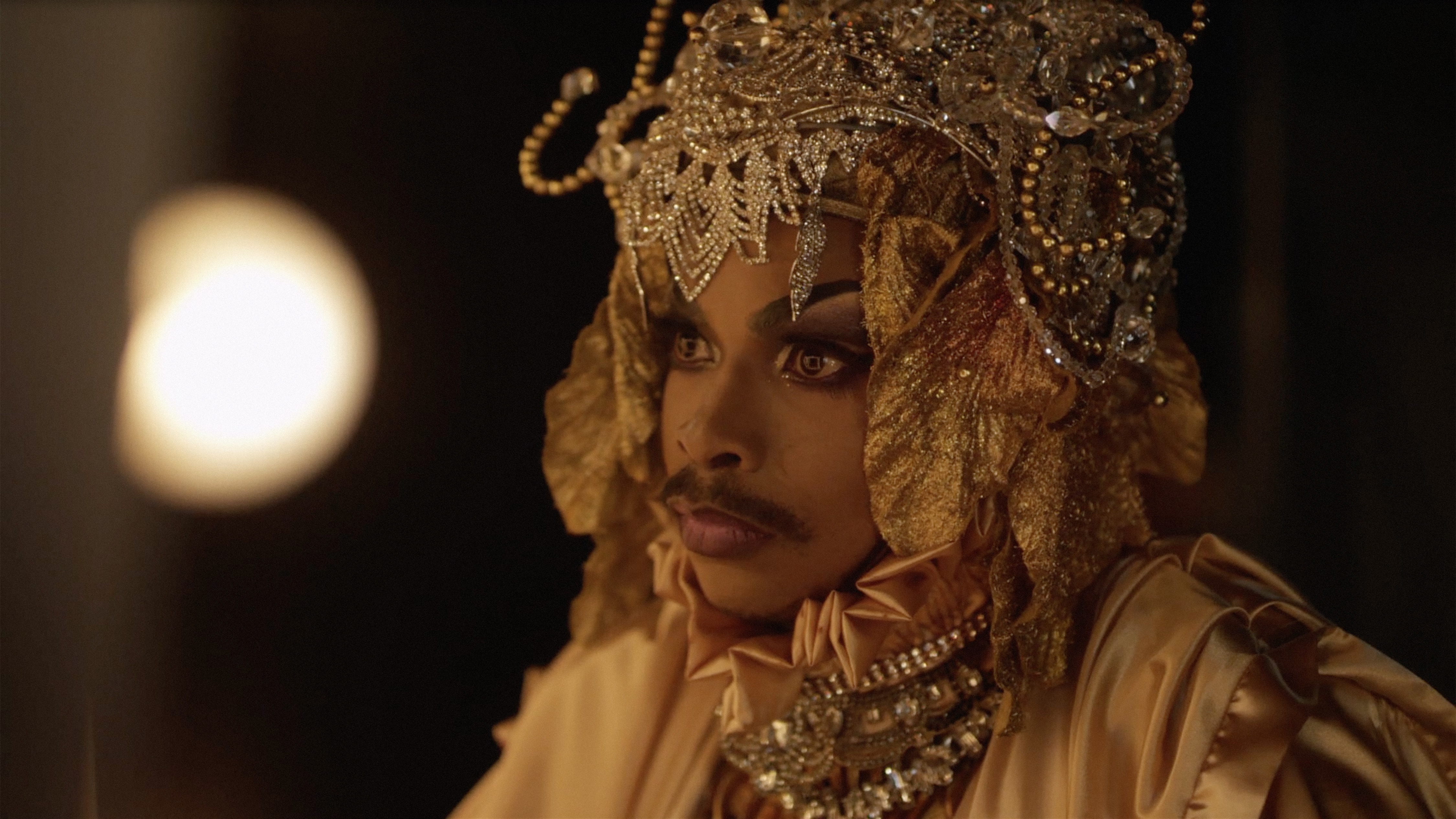 In his vibrant, alluring art, Athi-Patra Ruga empowers himself and his community, addressing themes of identity, sexuality, AIDS, and queerness in post-apartheid South Africa. He creates worlds that refer to Black activist mythologies, populated by avatars inspired by Xhosa spiritual figures and celebrities of popular music, classical dance, and British legend. Ruga’s constructions come alive further in the various media of his practice: performance, photography, video, handwoven tapestries, and prints.

Born in 1984 in Umtata, South Africa, Ruga attended the Belgravia Art College in East London, South Africa, and received a scholarship to study fashion design at the Gordon Flack Davidson Academy of Design in Johannesburg. He lives and works in Johannesburg and Cape Town, South Africa, and his multimedia works have been shown internationally, most notably at Louis Vuitton Foundation, Paris; Performa 11 and 17, New York; Bass Museum of Art, Miami; SFMOMA, San Francisco; Guggenheim Bilbao; Somerset House, London; and the 55th and 56th Venice Biennales.

Ruga works in series that comprise various media, beginning with Future White Women of Azania (2012–15). “Azania” was an ancient Greek term that referred to South Africa and later was adopted by Black South African activists during the struggle to end apartheid to represent a free world or utopia. The artist further appropriated the term to title his imagined world, where he challenges conventions and categories of identity. The central figure of these works is a Future White Woman whose upper body is encased by multicolored balloons. She dons pink tights and high heels on her lower body and often is seen posed upon a mythical saber-toothed zebra. The balloons render her race and gender ambiguous in photographs; however, in performances, they are ultimately popped, revealing a Black man (the artist Ruga) in the role of a White woman. The act therefore affirms Ruga’s contention that people presume they understand a person just from one’s skin and face. Keeping them concealed challenges viewers to question how identities are known and signified.

Ruga’s following series, Queens of Exile (2015–17), continues the saga of Azania and focuses on the character Versatile Queen Ivy, inspired by both Rihanna and Lady Godiva. Ivy has been exiled from Azania and sets out to found her own land of freedom, New Azania. The series translates “exile” as not only a political ban from one’s homeland but also the exclusion of histories from a nation’s cultural and collective memory. In Ruga’s videos, photographs, and tapestries, he acknowledges the queer and female figures and histories that contributed to the independence and making of present-day African nations across the continent. And such veneration continues in his ongoing project Beatification of Feral Benga (2017–present). In several woks, Ruga poses as Benga, the Senegalese dancer, queer icon, and muse of Harlem Renaissance artists. Nude and fully dressed, he adorns himself with pearls, crystals, and female breasts in imagery that suggests Benga’s role as a progenitor of modern queer African culture, as he connects his own persona to that of his forebear.

Throughout his body of work, Ruga melds trauma and glamour in elaborate designs and imagery, best displayed in his video Over the Rainbow (2016–17). The work is part of the Queens of Exile series and features Ruga, who appears as his characters Queen Versatile Ivy, wearing a champagne-colored, ruffled silk robe and towering, crystal-adorned tiara, and Walking Wound, a fully bandaged man that represents unresolved traumas of historical injustices and onto whose face the images of forgotten, or rather erased, historical figures are projected. The video begins with Ivy sitting at a brightly lit vanity table, contemplating himself in the mirror and the various symbolic objects that surround him—a protea flower, his grandmother’s apartheid-era identity pass, and Jacqueline Susann’s novel Valley of the Dolls­—as the lyrics to Weekend Special by Brenda Fassie, the “Queen of African Pop,” are overheard.

In a following scene, Ivy stands on a lit pathway and begins to dance with moves made more ethereal through Ruga’s editing and production techniques of slow motion; overlapping, doubled, and tripled images; red lights; and strobe lights. Ivy’s dance is intercut with scenes of (seemingly) elder ladies wearing oversized, multicolored sun hats and flowing dresses as they stride across the screen. They later encircle the Walking Wound and accompanied by a hymnal soundtrack, they slowly unwrap his bandages to reveal his bared body, standing confidently amidst the discarded cloth, awakened and reborn.

Over the Rainbow’s title is a riff on “Rainbow Nation,” the name for South Africa dreamt up by Archbishop Desmon Tutu, following the end of apartheid in 1994. Ruga critiques “rainbowism” and the social, political status quo that presumes a happy, harmonious family of South Africans, rather than pursues societal transformation that can address inequities and recognize the various cultures and contributions of Black queer, female citizens that South Africa comprises. Rather than grief or grievance, however, Ruga deploys camp and pageantry to retaliate against xenophobia, misogyny, and homophobia across Africa. As he observes, “humor, color, fashion, and a vivid pop sensibility have as much agency as anger, outrage, and the right to say, Fuck this!” —Kanitra Fletcher