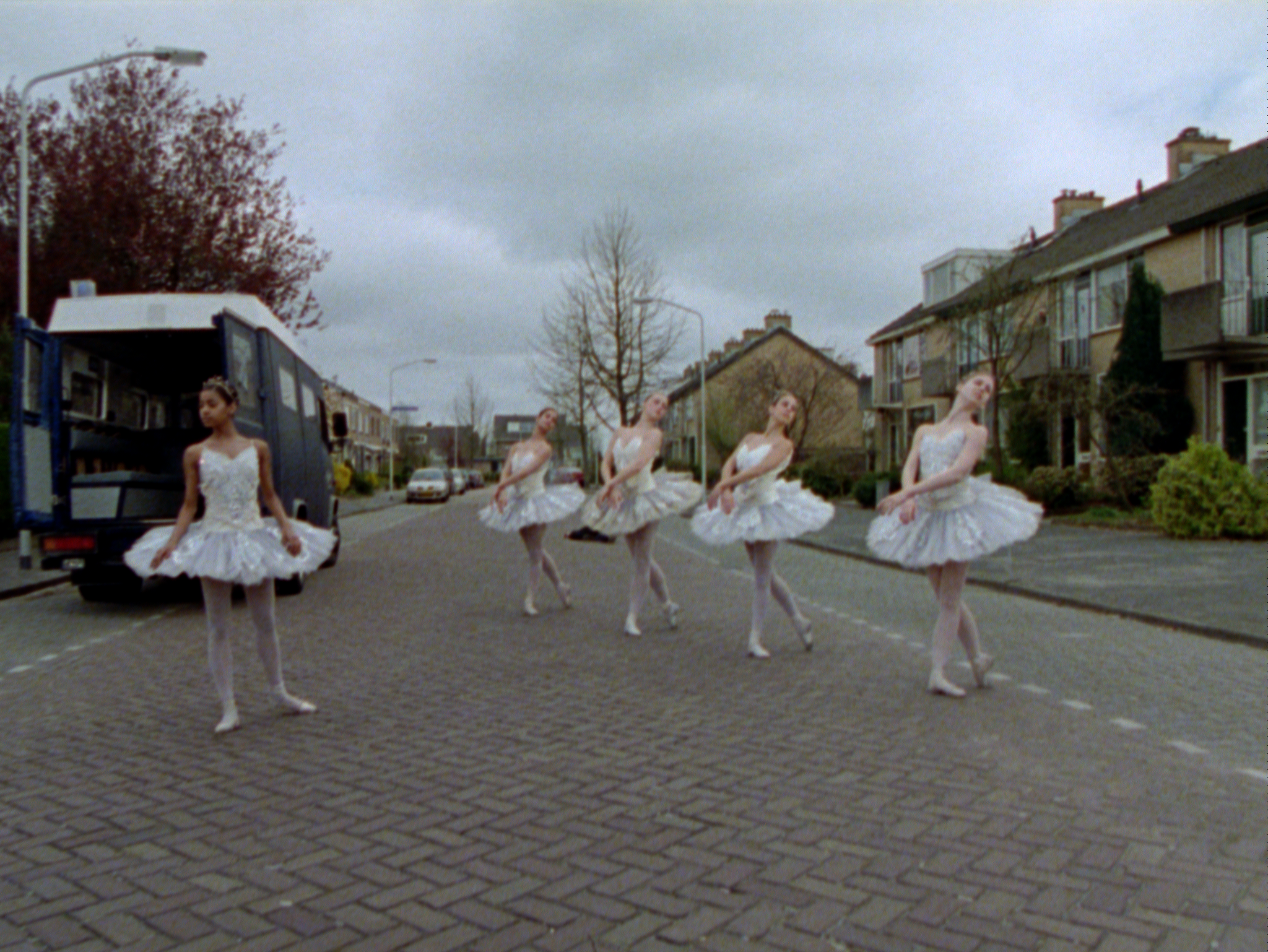 With a background career in performance art but a dislike for a live audience, Dutch artist Guido van der Werve found freedom in filmmaking that allowed him to perform in constructed scenarios and remote sites. Since 2001, he has made films that juxtapose the extraordinary with the ordinary. Normal actions occur in fantastical settings, or vice versa, and surreal activities take place in banal environments. For example, in Nummer Acht: Everything is going to be alright (2007) van der Werve leisurely strolls through the stark white expanse of the Finnish artic as the enormous 3,500-ton icebreaker Sampo plows through the ice behind him, and in Nummer Drie: Take Step Fall (2004), a group of dancers perform to Prokfiev’s Romeo and Juliet on a balcony above the artist’s local Chinese takeout restaurant.

Before focusing on art, van der Werve studied multiple subjects, including industrial design, archaeology, and Russian language and literature. He also is a classically trained concert pianist and composer, who employs these skills in his film works, frequently playing the piano himself or providing the score. His skills as an athlete have come into play as well. Van der Werve is an avid runner and triathlete who has competed in multiple international marathons and run under three hours fifteen minutes in all six of the World Marathon Majors. Accordingly, in Nummer dertien, effugio c: You’re always only half a day away (2011), he runs a twelve-hour ultramarathon, circling his home in Finland, and in Nummer veertien: home (2012), we see him running, biking, and swimming more than 1,000 miles, from Warsaw to Paris, from the Church of the Holy Cross where Chopin’s heart is buried to the Père Lachaise Cemetery, where the rest of the composer’s body is interred.

Tests of physical endurance such as these began early in van der Werve’s film career, as seen in Nummer twee: Just because I’m standing here doesn’t mean I want to (2003), a three-part video filmed in his birthplace, Papendrecht, outside of Rotterdam. It begins with a statement describing the artist’s depressive state. A voice over and subtitles on a black screen say he cannot wake up in the morning, is bored and tired all day, and cannot sleep at night. Next, we watch him commit suicide. Van der Werve faces the camera and walks backward into the middle of a street where he stands and waits for a car to run into him and knock him up and onto its hood. The final scene reveals the aftermath of the hit and run. A police van pulls up, and instead of officers coming to van der Werve’s rescue, five ballerinas exit from its rear. They proceed to gracefully dance to Arcangelo Corelli’s Christmas Concerto, apparently oblivious to the artist’s inert body lying in the street nearby.

Rather than concern for the apparent death of van der Werve, Nummer Twee takes a wryly humorous tone, as the ballerinas dance upon the artist’s grave in the banal setting of a quiet Dutch suburban street. Nummer Twee conveys both surreal and deadpan sensibilities. It takes the viewer through a range of emotions: from grim to shocking, to absurd and romantic. In just three minutes and with few words, the video belies the impassive demeanor of the artist while suggesting his desire for romance and beauty. Rather than dwelling on the despair of van der Werve’s apparent death, it mocks his demise and renders it peripheral to the ballerinas’ graceful performance, creating what Martin Herbert calls, “something like a perfect death.” –Kanitra Fletcher