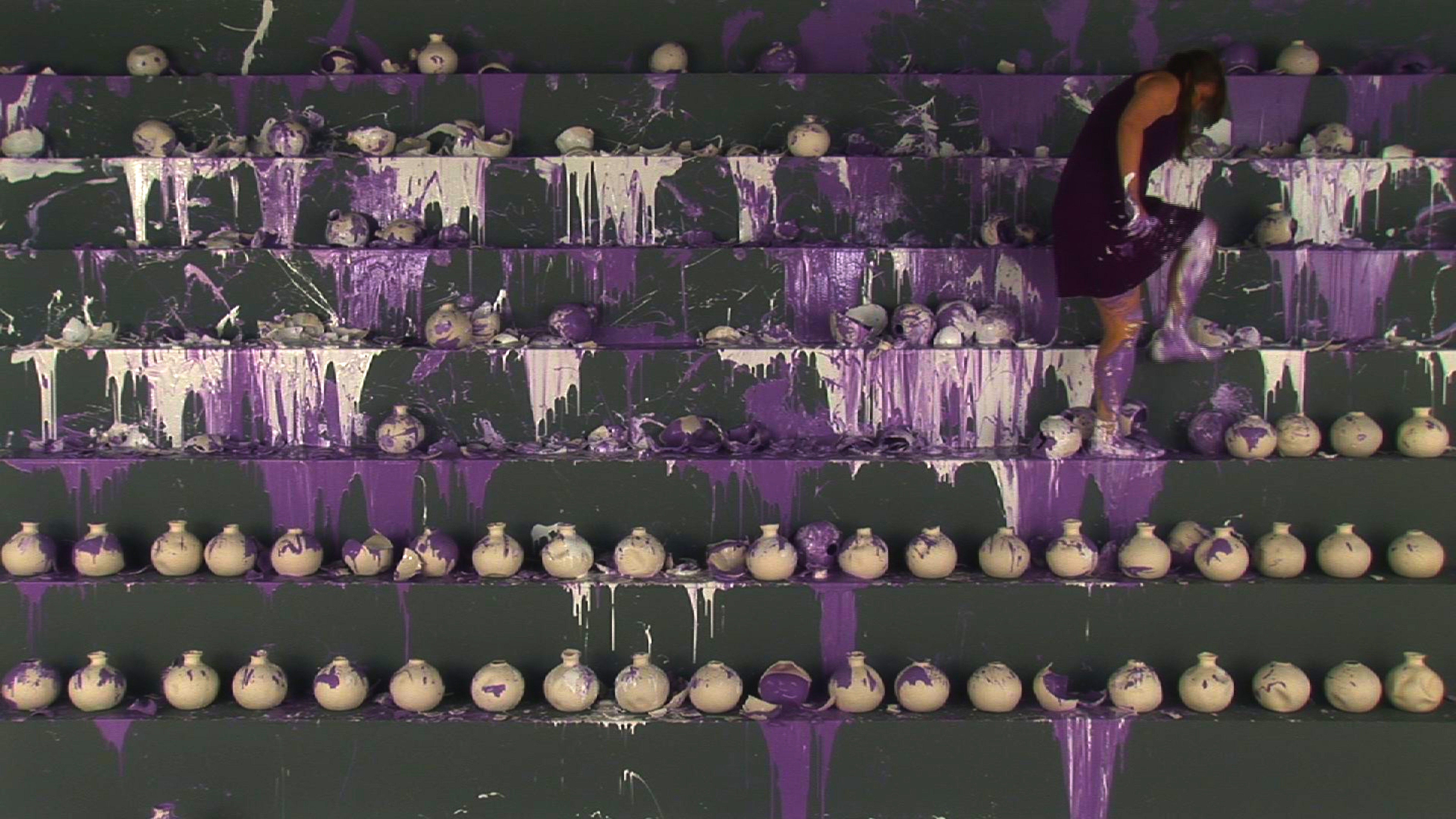 In Kate Gilmore’s videos, she often is involved in a struggle. Whether self-imposed or not, these moments reflect women’s determination to handle tough predicaments despite pain, frustration, and the occasional paint splash.

Gilmore was born in Washington, D.C., in 1975, and she currently lives and works in New York City. She received her BFA from Bates College in 1997 and her MFA from the School of Visual Arts in 2002. Although her background is in sculpture, Gilmore moved toward performance after noticing that visitors to her studio were interested in her process and materials as much as her work. Consequently, video enabled her to combine action and sculpture.

Gilmore based her early performances on Hillary Clinton and women of her mother’s generation, who she calls “very successful, yet conflicted; they were composed but full of inner rage.” In 2001, she wore a blue suit and posed while constructing a mud hut or hanging a chandelier. While absurd, those acts of stubborn perseverance echoed women’s struggle against sexism and the constant calls for them to prove their worth and competence. In subsequent videos, Gilmore has carried out playful yet political performances that critique the treatment and reception of women in the art establishment. Her actions, materials, and arrangements refer to canonical art styles like Abstract Expressionism and Minimalism, prompting viewers to reflect on the absence of women in related histories.

As the lone protagonist who faces a string of obstacles in these works, Gilmore wears dresses and feminine footwear that quickly become soiled as she smashes objects or objects smash into her body. Critics have compared her work to Marina Abramović’s masochistic performance art, but while Gilmore’s pieces are challenging and aggressive, they are also manageable situations that Gilmore knows she can overcome. Thus, the viewer can reflect more on her struggle than on her safety. Furthermore, the focus of the performances is not what she—Kate Gilmore—does, but rather what the female body can do. Rather than celebrity status, Gilmore seeks ways to examine and portray gender roles. For example, Every Girl Loves Pink (2006) demonstrates her interest in defying stereotypes and “love [of] doing brutal things with hyperfeminine colors.” An overhead camera captures her trapped in a tight space and engulfed by crumpled pink paper. The viewer watches Gilmore escape by stomping and kicking her pink heels against and eventually through a wooden barrier.

Despite the senselessness of such challenges, her defiance and determination is infectious, particularly in With Open Arms (2005). Wearing a lavender dress and matching hairpiece in what appears to be the conclusion of an earlier performance, Gilmore smiles at her audience and spreads her arms in Ta da!-like fashion. Her enthusiasm is greeted by an onslaught of tomatoes. However, she refuses to abandon her attempts to address the audience, even as she is violently pelted with the fruit. Typical of Gilmore, the work simultaneously instills a sense of humor and discomfort in the viewer. Likewise, in So Much It Hurts (2006), the anxiety of danger is tied to comical circumstances as a swinging video camera pounds Gilmore in the gut. The viewer hears her moans off screen while observing the view from the camera that swings back and forth, slamming into her abdomen again and again.

Gilmore has continued to undermine clichés by acting them out. In Between a Hard Place (2008), she wears a black dress, cocktail gloves, and yellow high heels with which she stomps and eventually punches through a series of grey walls. She breaks through all of them to reach the final wall that matches the color of her shoes. Pot, Kettle, Black (2010) shows Gilmore carelessly throwing pots filled with black paint onto a white bookcase. As she does, the black liquid splashes against the shelves and onto her hot pink dress. Similarly, Rock, Hard, Place (2012) features a large grid of black bowls installed on black shelving. As she throws rocks at each of them, the fuchsia-colored paint in the bowls splashes out.

In recent years, Gilmore has developed works that involve other women’s bodies. Walk the Walk (2010) was a seven-day performance in New York City’s Bryant Park in which seven women wearing bright yellow dresses and heels walked back and forth on an eight-foot-tall yellow platform from 8:30 a.m. to 6:30 p.m. As the piece mocked the banality and repetition of office work, it also turned those conditions into a vibrant spectacle. Like her earlier works, Walk the Walk represents the upkeep and stamina required of professional women—an ongoing challenge that often goes unnoticed. In Through the Claw (2011)—which was performed during the opening of her solo exhibition at Pace Gallery in New York—five women tore into a 7,500 pound block of clay for three hours. Wearing dresses and heels, they used their bare hands to grab and throw handfuls of clay onto the white walls, leaving behind a mess that resembled defecation. The event figured as a physical, feminist attack on celebrated minimalist sculptures like Tony Smith’s cubes and Donald Judd’s boxes.

Gilmore carries on her assault in Buster (2011). The video begins with a view of seven rows of approximately 150 ceramic pots that have been uniformly placed on a staircase. Such a precise setup belies the episode that follows. Gilmore enters at the top of the frame with a Godzilla-like presence and proceeds to stomp on, kick, and throw the pots, which contain purple and white paint. Despite her fashionable attire—black dress, ballet flats—Gilmore acts with complete disregard for her personal appearance or physical pain. She endures ten minutes of flying paint and stoneware, exiting the scene to leave behind an image akin to an Abstract Expressionist painting.

Is Buster an ode or an answer to such revered painters as Jackson Pollock or Willem de Kooning? The ambiguity of the video is reinforced by Gilmore’s deadpan expression and behavior. While her actions indicate that she is the “Buster” of the pots, the manner in which she conducts herself also evokes the silent film comedy of Buster Keaton and his trademark impassive physical comedy. As Gilmore wages a feminist, artistic fight against the masculinist art regime, she is cool, calm, and collected in her deliberate disruption of visual order and hierarchy. Moreover, rather than the familiar trope of a hysterical woman throwing dishes at a man, she embodies the focused woman artist determined to break the glass ceiling of the art world. —Kanitra Fletcher