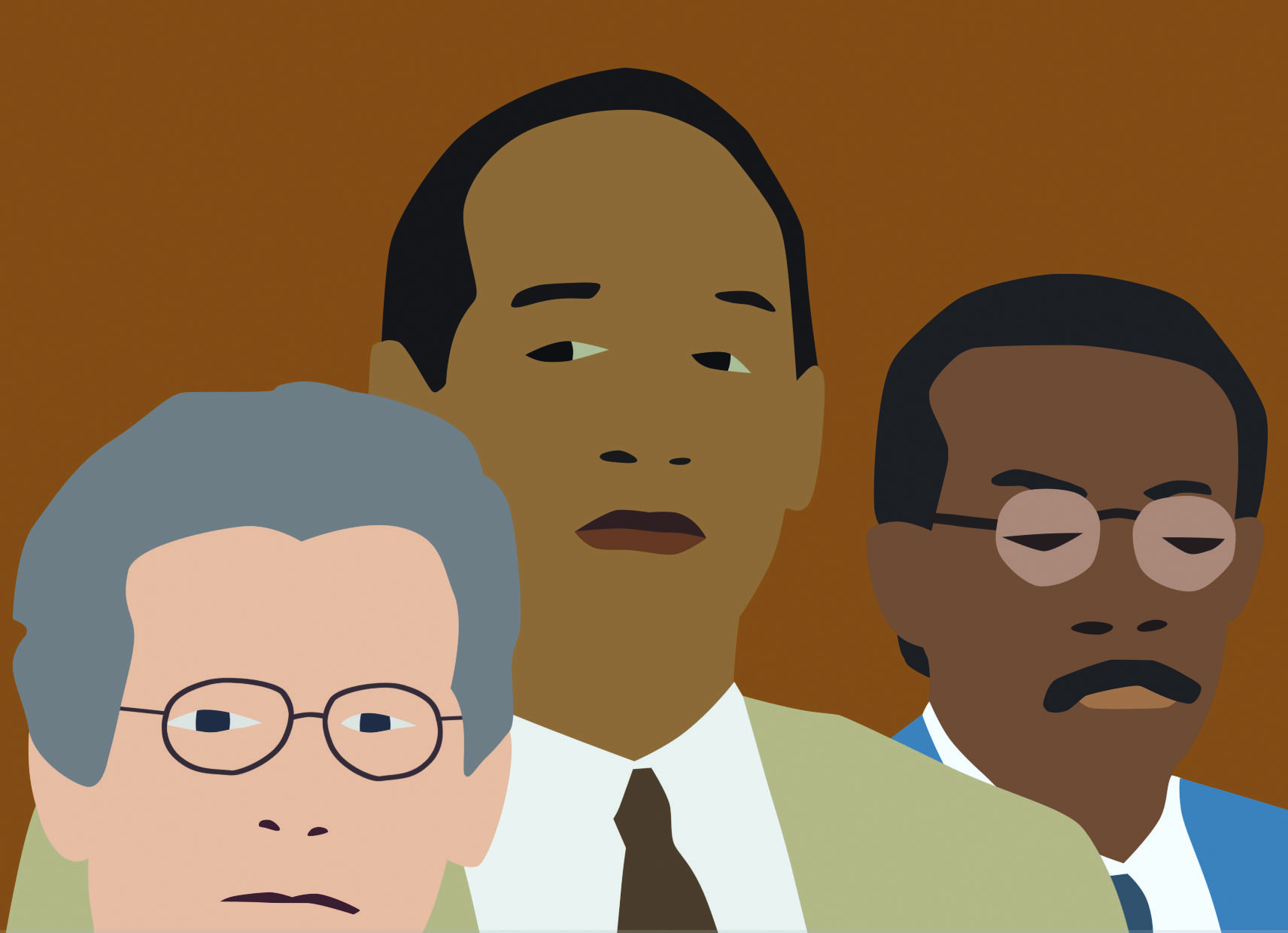 A child of the 1980s, Oakland-based artist Kota Ezawa equates his practice to DJing. He grew up during the emergence of hip-hop, a musical style based on sampling—the re-purposing of pre-recorded sounds—to create new music. Likewise, the artist produces videos, or what he calls “moving paintings,” lightboxes, and works on paper by re-creating existing imagery from film and television, typically depictions of infamous historical events in popular culture and art history.

Via a rotoscoping animation process, Ezawa renders these moments in his signature flat, graphic, pop art style, which recalls paint-by-number or Alex Katz compositions. His visual vocabulary extracts lines and shadows, reducing imagery to blocks of color. Faces become simplified to eyes, brows, nostrils, and lips, and bodies gesture in stilted, abrupt manners, thus calling attention to the artificiality of the medium as well as the manufacture of spectacle. The simplicity lays bare how the movement and angles of the camera—close-ups, wide shots, panning, tilting, and so on—heighten the drama of a sequence and thus our collective memory of an event. Boiled down to the essential elements, Ezawa’s seemingly dispassionate representations actually retain the emotional power of their source material. One still feels amazement watching his representations of Lincoln’s and JFK’s assassinations in The Unbearable Lightness of Being (2005); the drips of paint from Jackson Pollock’s brushes in Paint Unpaint (2014); Hollywood art heist films in The Crime of Art (2017); and the acquittal of O. J. Simpson in The Simpson Verdict (2002).

In October 1995, at the end of a protracted televised trial, the world tuned in to watch the former NFL player and actor O. J. Simpson judged not guilty for the murder of his wife Nicole and her friend, Ron Goldman. The Simpson Trial is widely considered one of if not the most notorious criminal trial in American history, not only for the brutality of the victims’ deaths but also for the implications of race, celebrity, and the mass media in its proceedings. The verdict remains a popular, controversial subject.

Ezawa’s video packs a powerful punch in less than three minutes as it follows the actual television footage of the reading of the verdict, using the original audio to accompany his animation. From a shot of Judge Ito at his bench, the camera pans across the courtroom to rest on Simpson flanked by his lawyers. As the verdict is read, the camera tightens on the defendant’s face, zooms out to capture Johnnie Cochran’s embrace, and closes again on Simpson. In Ezawa’s distilled imagery, we notice every blink of an eye and each turn and tilt of a head, all generating dramatic tension, as well as Simpson’s brief but stunning smile before the camera pans to Goldman’s sobbing sister and the blank stares of the prosecution. While much of the visual detail has been extracted from the scene and the outcome has been spoiled for more than two decades, Ezawa’s “moving painting” of The Simpson Verdict is indeed still moving, triggering our memories of the emotions, spectacle, and significance of that moment. —Kanitra Fletcher