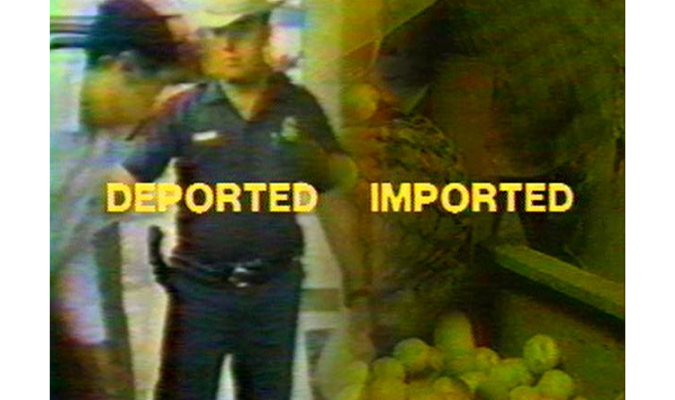 Video
14:00 min., color, sound
Courtesy of the Video Data Bank at the School of theArt Institute of Chicago, vdb.org

Work in Progress by Argentinian-born, Colorado-based video artist Luis Valdovino (b. 1961) is a synthesis of images, sounds, and texts referring to the cultural politics and personal experiences of largely Mexican migrants to the United States in the late 1980s. In 1986, President Ronald Reagan signed the Immigration Reform and Control Act (IRCA), which granted amnesty to undocumented individuals who could “prove that they were not guilty of any crime, had been in the country before January 1, 1982, and possessed at least a minimal knowledge about U.S. history and government and the English language.” Valdovino explores the effects of this law, particularly for those individuals who were not granted amnesty and labored to support their lives and the economy of a country that would continually abuse and mistreat them.

Work in Progress begins by reminding viewers that the Mayans established civilization in 500 BCE. Nonetheless, as the next sequence illustrates, today their descendants have been blocked from crossing the U.S. border, unlike a row of ants that are free to roam. The work then proceeds to balance news recordings, television interviews, and documentary footage. Valdovino shows us Reagan signing the IRCA, followed by black-and-white TV footage of flying saucers invading the country—equated to the presence of “illegal aliens”—as well as scenes of a white suburban family fleeing to prepare and decontaminate themselves during an “Alien Watch.”

Alongside these allusions to xenophobic fear and hysteria, Valdovino intermittently inserts quotes that illuminate bitter irony (“All states that declared English as the official language have Spanish names.”) and downright loathsomeness of statements made by officials, such as former INS commissioner Harold Izel, who advised, “If you catch an illegal alien, you ought to skin him and fry him yourself.” Work in Progress repeatedly demonstrates how migrants have been seen as animals or inhuman. From the man who recounts being thrown into the “corral” jail or “pig house” after being caught by migra (immigration police or authorities) to a worker who describes the experience of being sprayed with pesticide as his employer had more concern for their crops than the human beings cultivating them.

The video later ends with footage of Frank Sinatra sentimentally serenading a group of children with “The House I Live In (That’s America to Me)” as shots of shanties, barbed wire, field workers, and protestors attacked by police with dogs and firehoses accompany his refrain. The history captured in Valdovino’s video thus continues to resonate over three decades later as immigration continues to be an unsettled and highly contested political issue in 2022. With both biting humor and disillusionment, Work in Progress suggests there is more work to do and not much progress has been made. –Kanitra Fletcher