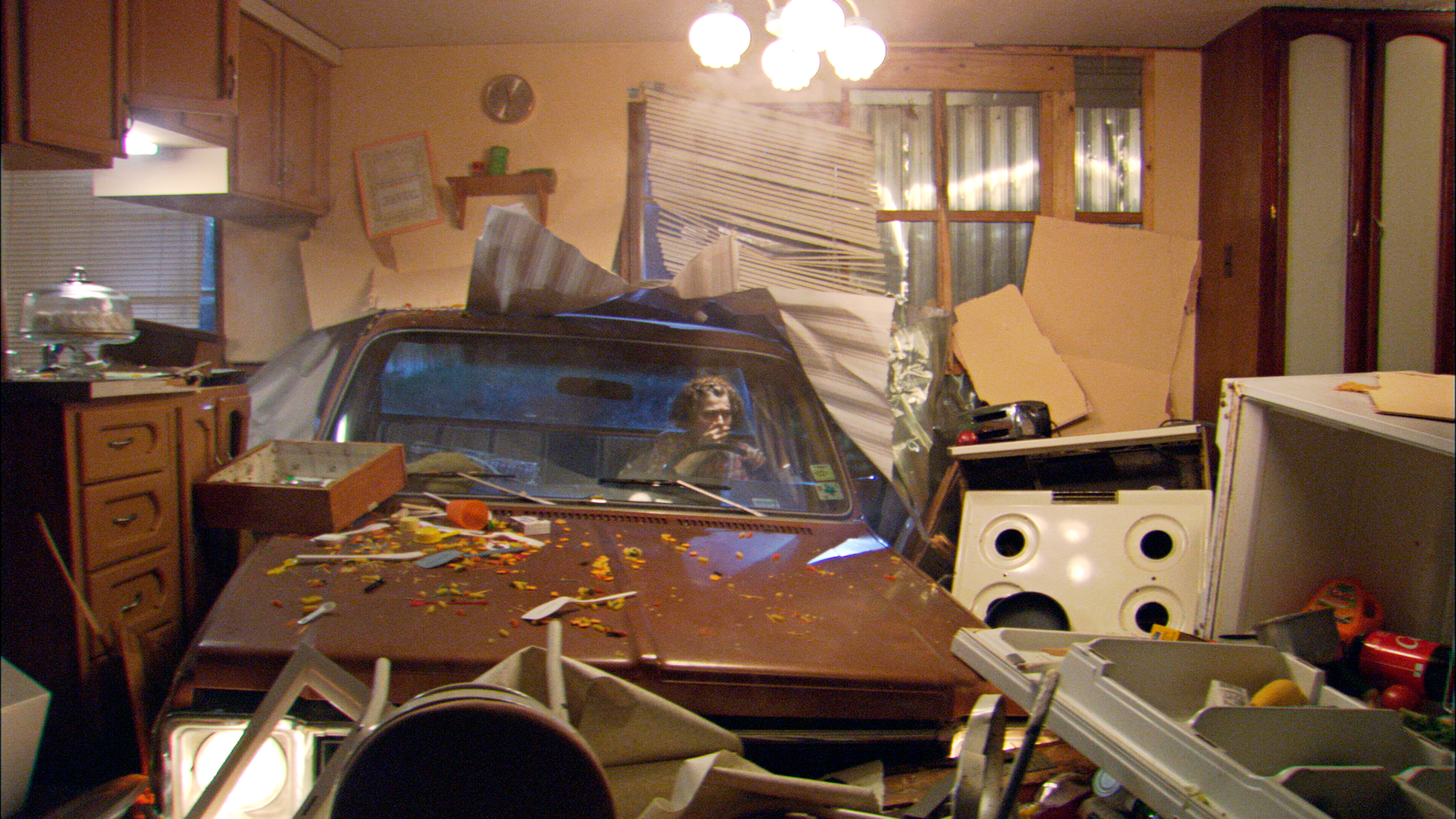 Artists Teresa Hubbard and Alexander Birchler have explained, “No matter what physical form a given piece takes, the constant within our work has been a strong presence of the performative, the sculptural, and the cinematic,” all of which are present in their 2002 video Single Wide. Structured by a looping sequence and shot with a camera that pans and spirals around the set, the work begins at whichever point one starts watching. The video might begin with a young woman dressed in a flannel shirt fixing her appearance in her bedroom mirror. What follows is a suspenseful, enigmatic episode that, with repeated viewing, can leave us with more questions than answers.

The camera circles out of the woman’s home and into the night, where a running pickup truck illuminates the “single wide” trailer home from the front yard. Carrying a bag with a child’s belongings, the woman exits the house and enters the truck, driving off as she ignores her ringing cell phone. While she is away, the camera continues to circle the home and pan across the opposite side, where we see a child’s room, living room, kitchen, bathroom, and the main bedroom again. The horizontal pan allows us to take in the carefully arranged details of the rooms and assess the socioeconomic status of the woman through her living conditions and decor, which one critic sardonically referred to as “high Walmart.” The camera and the woman return to the front yard. She is distraught and crying, and the camera moves in tight enough on her face for us to see a bloody gash above her brow. She lets out a scream, hits the steering wheel and, as the camera pans to the back of the trailer again, she drives the truck forward and we hear a violent crash. By the time we see the living room and kitchen again they are in shambles with the stunned woman sitting in the front half of her truck, which is lodged inside house. The camera continues past the untouched bathroom and bedroom to the yard, where the woman struggles to exit the truck. She later stumbles through her wrecked home, still holding the bag, and makes her way back to the bedroom mirror where the sequence begins all over again.

Despite the meticulously detailed set and choregraphed action, questions remain. Stuck in Single Wide’s merry-go-round format, we are left wondering: Where did the woman go? What happened while she was there? And why did she destroy her own home as a result? The wordless portrayal leaves few clues as to the woman’s motivations. Our interpretation therefore relies on familiarity with cinematic tropes, such as the desperation of a rural, working-class white mother. As the artists have stated, “One of the most important things for us is that we have always left the authority of reading the work up to the viewer and there’s got to be active interpretation that’s not just asked for, but is somewhat demanded.”

Nonetheless, we are kept at a remove from the immersive quality of a typical cinematic experience. While the use of various filming techniques—the loop, spiral shot, and pan movement—communicates the disorientation of the protagonist, our recognition of the camera’s movement denies any realism. The circular structure and motion heighten the drama of the story as they also enhance its artifice. In this way, Single Wide shows us how the camera adds energy, enhances emotion, and controls perspective, making us cognizant of our position as observers of the production of the story, rather than being immersed in the narrative.

We also see other traditions disrupted by the seeming delirium of the protagonist. That is, the woman’s actions speak to efforts toward dismantling gendered social roles and expectations that women solely maintain the home and care for children. Rather than hysteria, the ramming of the truck is thus a refusal to comply. The mysteriousness of Single Wide’s plot is an invitation to consider these broader implications. While we will never know the cause of the crash, that uncertainty gives us the freedom to make meaning out of its impact. —Kanitra Fletcher