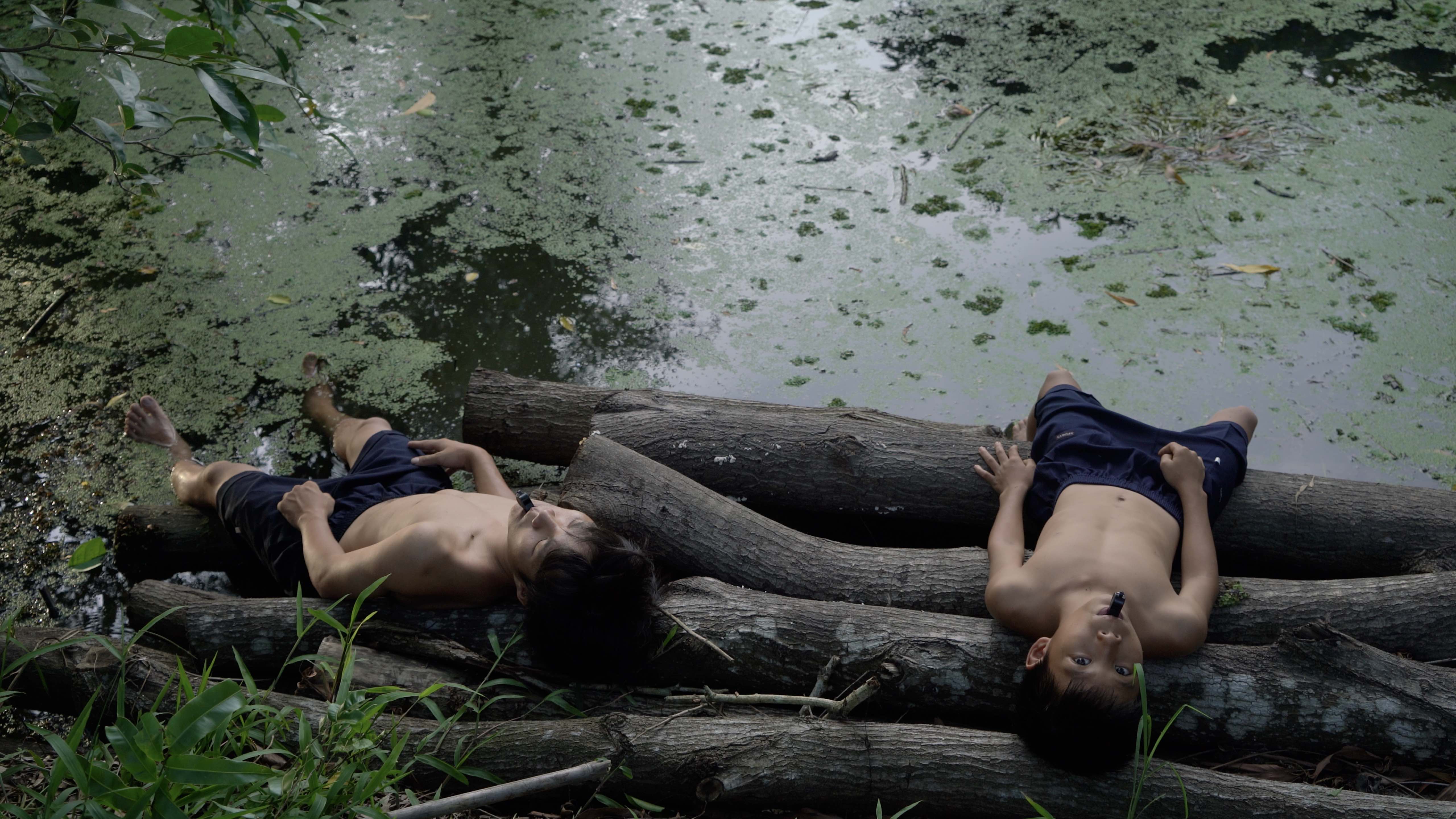 In her multi-disciplinary practice, artist Thao Nguyen Phan has drawn inspiration from the history, politics, economics, and culture of Vietnam. Her video installations, paintings, drawings, and sculpture condense real and imaginary worlds to represent the nuances and complexities of her country’s underacknowledged pasts and present-day realities and how they might impact its future.

Phan’s 2017 two-channel video installation Tropical Siesta (2017) examines forgotten histories of Romanized script and the violence of colonial rule in Vietnam through painted animation and staged performances of children that refer to History of the Kingdom of Tonkin by the seventeenth-century French Jesuit missionary Alexandre de Rhodes. The black-and-white three-channel video installation Mute Grain (2019) also features child actors to examine agricultural devastation and loss of human life during the 1945 famine in Vietnam in a narrative inspired by To Hoai’s short story Starved. While examining historical events, these and other works rely heavily on myth, poetry, and literature to represent the past. As Phan explains,

I observe Vietnamese official history as a grand myth, and in many ways, folklore, fiction, and oral history can carry more truth than historic account…. [F]or me, the history we consume as “truth” becomes so altered that it aligns more with myth and fiction. Myth becomes a metaphor, a mirror to comprehend the truth, and an escape from harsh reality.

In an effort to respond to that reality, including past and ongoing economic and environmental damage, works by Art Labor, the Ho Chi Minh City collective co-founded by Phan, created opportunities to recycle and invest in the natural resources of Vietnam. The group has used the uprooted, discarded trees from coffee and rubber plantations to construct sculptures with indigenous Jrai artists. Art Labor also ran a pop-up hammock café that served coffee grown in a highland village at various arts institutions in Vietnam, where she continues to live and work.

Phan returned to Ho Chi Min City after earning her MFA in painting and drawing at the School of the Art Institute of Chicago. During her time in the United States, she began to experiment with film and met artist Joan Jonas, who became her mentor. Jonas encouraged Phan to combine her interests in painting and video among other media to create a phantasmagorical style that employs what Phan terms “moving images” of documentary footage, found imagery, and hand-painted animation threaded together by poetic narration. Her work has since been exhibited in solo and group shows at Fundació Joan Miró, Barcelona; WIELS Contemporary Art Centre, Brussels; Chisenhale Gallery, London; Lyon Biennale; Sharjah Biennale; and the Rockbund Art Museum, Shanghai. Her awards include the 2018 Hans Nefken Foundation—Loop Barcelona Video Art Production Fund, which she received for Becoming Alluvium (2018).

The video continues Phan’s exploration of cultural, economic, and agricultural histories of Vietnam, specifically in relation to the Mekong River, the world’s twelfth-longest waterway that runs through Tibet, China, Burma (Myanmar), Thailand, Laos, Cambodia, and Vietnam. The river is considered the lifeblood of the region and has historically supported the rice farms and fisheries of Southeast Asia in large part due to its alluvium or nutrient-rich soil. Nonetheless, the Mekong is in danger of drying up because of the construction of hydroelectric dams and the depletion of aquatic life from overfishing as well as climate change. These practices have transformed the river’s cycles, resulting in floods and droughts that have devastated humans, their habitats, and their livelihoods.

Becoming Alluvium was therefore “inspired by the beauty and suffering of the Mekong,” as stated in the final shot. Consisting of three sections, the sixteen-minute video follows the aftermath of the collapse of a dam that caused the death of villagers living downstream, including two adolescent brothers. Becoming Alluvium represents the boys’ reincarnations into the beloved Irrawaddy dolphin and the notorious water hyacinth as it also recalls their past reincarnations as a writer, ferryman, rat, and a princess who evaporated into the river after realizing her vanity and greed. The poetic, dreamlike work combines documentary footage of the Mekong and its urban surroundings, staged scenes of two boys lingering along the river, found archival imagery, photography, and hand-painted animation to tell stories that incorporate texts by Rabindranath Tagore, Marguerite Dumas, and Italo Calvino. In her magical moving images, Phan plays with facts, fiction, and fables to shed light on both the cultural significance and ongoing destruction of the Mekong and reflect her hope for its renewal, a more prosperous reincarnation of the river. –­Kanitra Fletcher